Skip to main content
Join the voice for a changing South.
Donate Today
By Desiree EvansJuly 15, 2009 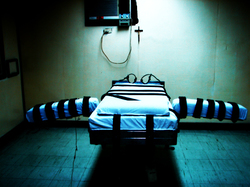 Following a heated and emotional debate on racial disparities in the criminal justice system, the North Carolina House of Representatives on Tuesday narrowly endorsed the Racial Justice Act, legislation that would give capital murder defendants and death row inmates the right to challenge prosecutions on grounds of racial bias.

Specifically, the Racial Justice Act would allow defendants in death-penalty cases to use statistics to try to show that race played a factor in the application of the death penalty in their cases. If the statistics showed significant racial disparities in how the death penalty has been applied, a judge could block a prosecutor from pursuing the death penalty in that case, or overturn a jury's decision to impose a death sentence. It would also allow inmates currently on death row the opportunity to argue that their death sentences were racially motivated. If a death sentence were thrown out under the bill, it would be converted to a sentence of life in prison without parole.
The act is a landmark piece of legislation for a state where blacks make up 20 percent of the total population but 60 percent of those on death row. The timing is also critical as North Carolina continues to debate the future of capital punishment.
North Carolina has more than 160 inmates currently on death row, although the state's last execution was in August 2006. The de hiatus on executions stemmed from several court challenges to the use of lethal injection. Recent court decisions have mostly resolved the remaining legal obstacles to reinstating the practice, such as the May 1 decision by the North Carolina Supreme Court in a lawsuit between the N.C. Medical Board and the N.C. Department of Corrections. The court said that the N.C. Medical Board overstepped its power with a threat to discipline doctors who participate in executions.
Civil rights groups like the North Carolina NAACP have pushed for the NC Racial Justice Act for more than three years, underscoring that the state has profound racial disparities in the application of the death penalty. Between 2007 and 2008, three African-American men on North Carolina's death row -- Jonathan Hoffman, Glen Edward Chapman and Levon Jones -- were exonerated. In all of the cases, at least one of the murder victims was white. One of the exonerated men was even convicted with an all-white jury. Combined they spent almost 40 years awaiting their executions for crimes they did not commit.
Nationwide, more than 130 death row inmates have been exonerated for wrongful or erroneous convictions since 1973, including eight in North Carolina. Supporters of the Racial Justice Act cite numerous studies that show clear links between race and how the death penalty is applied.
As the Independent Weekly reported:

Race can determine whether a defendant who is guilty spends life in prison or is sentenced to death. The American Bar Association, which has recommended temporary moratoriums until states can resolve widespread inconsistencies in death penalty cases, states on its Web site that "Racial and ethnic bias infects the decisions as to who gets prosecuted and who gets sentenced to death.

Amnesty International has found that 79 percent of homicide cases resulting in a death penalty involved a white victim, though half of all homicide victims in the United States are black. And a 2001 study conducted by two University of North Carolina professors, which analyzed cases over a four-year period in the 1990s, found the odds of receiving a death sentence in North Carolina grew 3.5 times in cases where the victim was white. That study, published by the Common Sense Foundation, found that black defendants in the state were also twice as likely to receive a death sentence, when comparing identical crimes. Of the 206 defendants who are on death row or have been executed in North Carolina since 1977, 100--or 49 percent--are black, although the state has had an African-American population of roughly 22 percent over the past three decades."

Only one other state -- Kentucky -- has a similar Racial Justice Act, although several states have debated similar legislation.
The NC Racial Justice Act goes to a second vote in the state House today, and then it will move back to the state Senate, where it faces a difficult challenge. Observers expect the bill will go into conference committee, where House and Senate negotiators would try to work out a compromise bill that could pass in both chambers. The Senate previously approved a version of the Racial Justice Act in May, but it contained controversial clauses meant to resume the death penalty in North Carolina. Those clauses were later removed in the House.

Challenging the death penalty in the South

A historic win for voting rights in Virginia

One woman's fight for the right to vote (video)