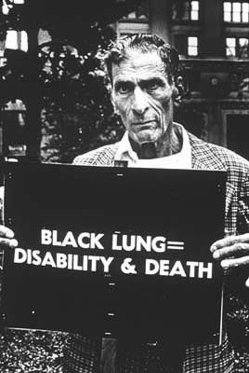 By Betty Dotson-Lewis, The Daily Yonder

John Adkins's Christmas wish in 2005 was to be healthy enough to spend the holiday at home with his wife, Grace, and his children.

John's bones had gotten so brittle the last time I visited him at his home in Gilboa, West Virginia, he had to straddle the cushions on the couch so that the bones supporting the bulk of his 140 pounds rested in the cracks. That position helped to alleviate the joint pain. He kept a couple of oxygen tanks at his side and one strapped on him so he could breathe. John suffered from several ailments relating to his work history.

His major illness was black lung. He spent his life as a coal miner in West Virginia.

One of John's longest and hardest-fought battles was for black lung benefits. Initially he was awarded black lung compensation but the coal company where he had worked appealed that ruling and a year later after he'd submitted to more and more medical tests, a federal administrative law judge overturned the decision, ruling in favor of the company. John had to repay what he had received. He ended up losing his pickup truck.

The struggle to breathe and the continuous disappointing struggle with black lung claims ended on April 7, 2006, when he was laid to rest on a hillside in his family's cemetery. John Adkins gave his all to Island Creek Coal Company, but when he became so ill he could no longer dig coal, he felt his employer turned on him and used every tactic imaginable to wear him down physically, break him mentally and deny him any benefits he may have deserved as a coal miner suffering from black lung.

Clifford McMann's black lung case made it all the way to Washington & Lee University in his family's last ditch effort to file for black lung benefits. He died the same week the mound of his medical records were delivered to the black lung legal clinic at the Virginia college. A lifelong West Virginia coal miner, Clifford bent over backward for his employer. He didn't even begin the process of filing for black lung benefits until retirement even though he showed signs of black lung years before. He did not want anyone to think he was not an honorable man. He filed to help with medical expenses. His widow is now left with a cardboard box of medical records and the sorrow of losing her husband.

Clifford McMann, like John Adkins, was initially awarded benefits, but the coal operator appealed and won. Clifford, like John, had to repay what little he had received, then start over again with the appeal process.

Numerous medical tests were required in Clifford's final appeal process. He submitted to these tests upon advice from doctors, lawyers and a hopeful family. Doctors reported Clifford suffered from black lung during early medical tests. During his final appeal, after Clifford had been moved to a nursing home because of his fragile and demanding medical condition, the coal company required Clifford to go to a doctor several miles away for a full day of testing to determine if he had black lung. At the time, one of Clifford's lungs was collapsed, he was on a feeding tube, could not walk, talk or sit up.

These miners and an untold number like them have died terrible, painful deaths as their families stood by helplessly. Not only were they cheated out of being able to take a breath of air without hoarse coughing, spitting up of phlegm and being unable to move about without an oxygen tank attached to their backs; we are now finding out these miners may have lost black lung compensation because of dubious tactics by lawyers representing coal companies.

This complicated legal story has been well-covered in the Charleston (WV) Gazette. It involves attorneys from the Jackson Kelly law firm, which represents coal companies, their handling of black lung cases. According to testimony at hearings, the Gazette reports that Jackson Kelly would require miners to take tests for black lung, but would not forward the complete findings of the doctor either to the miner or to the court. A coal company attorney testified that this was standard procedure in black lung practice.

"The cases allege instances where unidentified Jackson Kelly lawyers gave judges or the law firm's own experts only portions of the medical test results, withholding other evidence that proved miners had black lung. In some instances, Jackson Kelly attorneys allegedly withheld proof of black lung from miners who did not have lawyers helping with their benefits cases. But once those miners obtained lawyers, and those lawyers sought complete copies of the medical evidence, Jackson Kelly tried to settle the cases and avoid revealing the fraudulent actions, the lawsuits allege....The allegations stem from Jackson Kelly's representation of coal companies that opposed the granting of black lung benefits for miners."

Pioneer black-lung doctor Donald R. Rasmussen says, "The disease continues to be a problem at smaller mines in the region." On June 18, the Gazette's Andrew Clevenger reported that the "Jackson Kelly lawyer accused of ethics violations by the state Bar's Office of Disciplinary Counsel denied Thursday that he had done anything wrong by not disclosing an entire medical report to a miner seeking black lung benefits."

On June 19, the Gazette reported that the State Bar's Office of Disciplinary Counsel had opened ethics complaints against three additional black lung attorneys at the firm Jackson Kelly.

Although this country is suffering a downturn economically, a retirement package for many, many Americans includes pleasant changes in lifestyle: a move to a warmer climate, a smaller but nicer home, travel, enjoying family, friends and good health. None of this is in store for most West Virginia coal miners who suffer from black lung. A retirement package in their case will include a cane or walker to help them get around; an oxygen tank to help with breathing; breathing pills; incessant coughing; spitting up phlegm; and an early trip to the grave, leaving behind a family depressed and hit hard with medical bills.

Coal miners get black lung from breathing coal dust. The dust builds up in a miner's lungs and gradually reduces his ability to breathe. The body is unable to remove this dust from the lungs. Continued exposure to coal dust for a miner who has developed simple coal workers' pneumoconiosis results in complicated coal workers' pneumoconiosis marked by large, black, fibrotic scars from 2 to 10 centimeters in diameter. The lung appears blackened. Miners with black lung breathe short, raspy breaths. Black lung slowly strangles its victims to death. 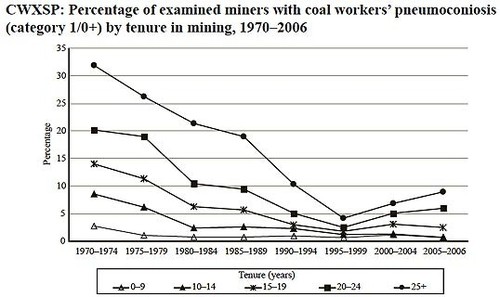 Recently, there has been an upturn in the incidence of black lung disease after many years of decline. (NIOSH)
NIOSH also reports a rise in the number of black lung cases from 1995 to the present time, indicating 13 percent of miners with 25 or more years experience have the disease. Southern West Virginia, Eastern Kentucky and Southwestern Virginia show the largest increases. Data from the Enhanced Coal Workers' Health Surveillance Division of NIOSH report this fatal condition is appearing in miners at a younger age -- miners with less than 25 years in the mines.

When West Virginia coal miners suffering from black lung reach the point where they can no longer dig coal and they meet guidelines such as working the required number of years exposed to coal dust, they become eligible to file black lung claims for monthly benefits to live on. These benefits were made possible by passage of the Federal Coal Mine Safety and Health Act of 1969.

Congress created these benefits 40 years ago, but actually obtaining them through the black lung claim process continues to be a long, complicated, legal and disappointing effort for hundreds of coal miners each year. When the decision is made to award a miner monthly benefits, the coal company has the right to appeal that decision, and often does. The miner must pay back the money received if the decision is overturned in the coal operator's favor during the appeal process.

Coal operators retain the most experienced and best educated lawyers in the country to represent their business interests, which includes appealing black lung claims awarded to sick coal miners. Jackson Kelly is one of the firms that handles those appeals.

The coal miner, on the other hand, already sick and disabled from black lung disease contracted while working for the coal company, has a difficult time retaining legal representation because few lawyers represent coal miners filing black lung claims. The process to reach a final decision may take years, and the lawyer is compensated only if the miner wins the case. Orval King, now deceased, announced at one Fayette County Black Lung Association meeting that it had taken 19 years to reach a final decision in his case.

The miner, besides going from lawyer to lawyer trying to find legal representation, must begin the process of submitting to medical tests by a medical professional trained to diagnose the debilitating disease and determine how far it has progressed. This involves travel to black lung clinics or hospitals where lung function tests are performed, X-rays made and CT-scans taken.  At a hearing before an Administrative Law Judge, the miner often represents himself, even though he has limited formal education and, usually, zero experience in the courtroom. The miner attempts to spar with top ranked legal eagles who may appear in flocks representing their clients.

Lay representatives working at black lung clinics or volunteers may assist the miner. These lay personnel are spread thin; in remote rural areas, often miners have no idea that lay persons are available to assist.

Then a decision is appealed and the process starts again.

Now, the public is finding out other tactics are used by black lung attorneys representing coal companies to persuade judges that the coal miner does not have black lung.

Coal miners will tell you that they love their job. They come to terms with the dangers involved. They are loyal to their company and do the work needed to supply the fuel that lights up this country.

All they ask in return is that justice be served.

Betty Dotson-Lewis is a West Virginia writer and a member of the Fayette County (W.V.) Black Lung Association.