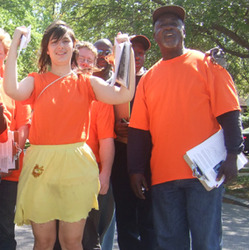 Sanitation workers in Charleston, South Carolina, are knocking on doors to drum up support for their battle to gain recognition for Local 1199B, part of the National Union of Hospital and Healthcare Employees-AFSCME.

On April 4, the anniversary of Martin Luther King's assassination during a 1968 sanitation workers' strike in Memphis, the Charleston workers launched a door-to-door petition drive to raise awareness of their struggle and pressure the City Council to recognize the union.

City officials have offered to meet with any individual worker about their concerns, but maintain that the state's right-to-work laws prevent them from negotiating with public sector employees. Union supporters counter that no South Carolina law forbids public employees from collectively bargaining.

Workers have complained of abusive supervisors, an ambiguous system of promotions that pits workers against one another, and treacherous working conditions.

One driver was blamed for an incident in which a falling tree branch pinned her in the cab and seriously injured her neck and shoulders. She was rushed back to work, as was a collector whose eyes were burned by chemicals that shot from a paint can as it was being compacted.

Until recently the sanitation workers had hoped to resolve these grievances through discussions with their supervisors. The discussions have provided a few token concessions such as new rain jackets, but little actual relief.

The workers have now concluded that establishing an employees' organization with democratic rights to negotiate with the city is the only way to win some measure of equality and fairness.

"If you're a public servant you deserve dignity, respect, and acknowledgment that you're doing a service for the community," said Richard Polite, a 12-year sanitation department veteran, who adds that the workers' demands are not primarily economic but center on basic human rights.

"We're overworked, underpaid, and disrespected. The people who are in charge of sanitation have got to realize that they're dealing with human beings."

While the City Council has the power to grant the union's request, the decision likely rests with Mayor Joseph P. Riley, who enjoys considerable influence over the Council.

Learning from the '60s

Since last summer, the workers have been meeting with Mary Moultrie and other leaders of a historic 1969 struggle. Forty years ago, Charleston was the center of a bitter 113-day strike by 400 hospital workers, almost all of them black women.

It drew strong support from Local 1199 and the Southern Christian Leadership Conference, and many civil rights and union activists viewed the strike as an indication of the potential for joining black power with labor militancy.

"There is more openness in Charleston today. It's a different city," acknowledges Moultrie. "But what drew me to the sanitation workers is that the day-to-day grievances are exactly the same as the ones we faced 40 years ago. This petition drive has brought those hidden grievances to the attention of the public."

Area students and members of Longshoremen (ILA) Local 1422 have joined the workers in collecting more than 4,000 signatures.

"Our reciprocal approach to workers who are organizing is a lesson we learned well during our struggle," said Leonard Riley of Local 1422, which was at the center of a nearly two-year international solidarity campaign to resist union-busting and to free five of its members -- the Charleston 5 -- arrested during a picket line protest.

"We know that we have to be there for any group of workers like the sanitation workers who are doing what they do to earn a living and protect themselves on the job," he said. "No one does it in this political and economic climate on their own."

Kerry Taylor is co-chair of the Institute for Southern Studies, publisher of Facing South, and teaches labor history and oral history at The Citadel in Charleston. See www.charlestonpeace.net for more on the sanitation workers' campaign and to sign their petition.

(Photo by Ajamu Dillahunt, who co-chairs ISS with Taylor)