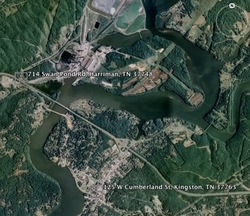 The city of Kingston, Tenn. plans to hold its annual July 4 "Smokin' the Water" celebration tomorrow at a public park near Watts Bar Reservoir. The event is expected to draw as many as 25,000 people with festivities including raft races, boating and swimming.

But the park is only a short distance downstream from the site of the massive coal ash spill from the Tennessee Valley Authority's Kingston power plant -- and test results released this week show dangerous levels of heavy metal contamination that could endanger the health of people who come in contact with the water.

For a sense of the festival's proximity to the ash spill, see the Google Earth image above, which shows the location of the collapsed ash pond on Swan Pond Road and the park on Cumberland Street (click on image for larger version).

Among the toxic contaminants found at levels exceeding basic water safety standards were antimony, arsenic, barium, beryllium, cadmium, chromium, lead, mercury, nickel, selenium and thallium -- metals that have been linked to cancer and other health problems. For details on the chemicals' health effects, visit the U.S. Agency for Toxic Substances and Disease Registry's ToxFAQs page.

The tests were conducted by consultants hired by an environmental law firm that's suing TVA over last December's disaster, which released a billion gallons of toxic coal ash into a nearby community and waterways. The attorneys released the results to regulatory authorities this week. A June 30 letter sent by the firm to the U.S. Environmental Protection Agency and Tennessee Department of Environment and Conservation stated:


Although these samples have been taken for litigation purposes, we believe that the agencies with the responsibility to protect public health and the environment should have the results in order to make informed decisions about protecting downstream water users, particularly given the upcoming July 4th weekend, which will surely include significant public contact with the waterways as part of the holiday festivities and recreation.

The samples were taken recently by qualified consultants using methods approved by EPA and TDEC and analyzed by a certified in-state laboratory. To view the law firm's water testing data, click here. For the United Mountain Defense press release about the findings, which includes an excerpt of the law firm's letter to environmental regulators, click here.

Last month, EPA, TDEC and TVA jointly issued a recreational advisory for upper sections of the Watts Bar Reservoir. But the law firm warns that its data show unsafe concentrations of metals much further downstream than stated in the advisory. In fact, it found high levels of arsenic, lead and mercury 27 miles into the reservoir.

Coal ash in your veggies?