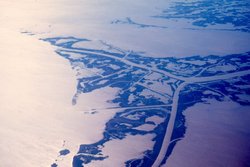 In November 2005, the U.S. Congress directed the U.S. Army Corps of Engineers to produce a plan - the Louisiana Coastal Protection and Restoration study - to outline a full range of hurricane protection measures to protect coastal Louisiana from Category 5 hurricanes. The LACPR report, or the "Category 5 plan" as it is sometimes called, was due to be completed by the end of 2007, but the Corps missed the deadline and the plan was not released until June 9, 2009.

The long-overdue report, which was supposed to offer a comprehensive storm protection plan to address both coastal restoration and levee building, has since come under heavy criticism for failing to do just that. Last week the National Academy of Sciences peer review committee released a report blasting the Corps' study for not only missing the 2007 deadline, but for offering only "broad" plans and failing to provide clear recommendations. As the Times-Picayune reported, this group of renowned scientists and engineers said the Cat 5 study's lack of a comprehensive long-term plan -- and of projects that could be started immediately -- represented "substantial shortcomings." The Corps has since said it will try to incorporate some of the reviewers' recommendations into the final version of the Cat 5 plan, which will be delivered to Congress by the end of the year.

The groups are encouraging members of the public to send comments to the Corps explaining that levees alone are not enough to defend south Louisiana, and what is needed is a comprehensive approach including the lines of defense strategy. The coastal protection groups are asking the Corps to address the following concerns before the final Cat 5 plan is presented to Congress:
The Corps is currently accepting public comments on the Cat 5 plan until the comment period closes on July 24. To send a comment, visit here.

(The last image illustrates the eleven types of lines of defense, such as barrier islands, ridges, levees, floodgates etc. The strategy also includes vital elements such as "non-structural" techniques, i.e. elevating homes above the potential surge levels. The last line of defense is evacuation routes which allow residents to move from harm's way. From mlods.com.)