I grew up in a small, rural town in southwest Louisiana. At the time I went to high school (and it's still the case today) black kids and white kids had separate proms. All the black kids went to the "official" school prom, in a streamer-filled high-school gymnasium, and all the white students threw their own separate prom across town in a party space paid for by their parents. In my small, segregated hometown, having two proms has become part of the norm, a practice generations old, and one that no one questions.

I was reminded again this week of that practice as I watched the HBO documentary, Prom Night in Mississippi, which tells the story of the small town of Charleston, Miss., which until 2008 held separate proms for white and black students. Similarly to my hometown, in Charleston school officials and white parents came together to create segregated high-school proms, a tradition that has been in place since 1970, when the town first allowed black students to attend white schools (16 years years after the Supreme Court ordered the desegregation of public schools). 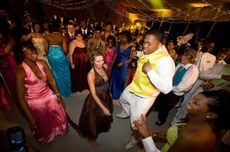 Charleston is the current hometown of Oscar-winning actor Morgan Freeman, who unsuccessfully tried as far back as 1997 to integrate the town's school prom, but was continually rebuffed by the local school board. Freeman then offered to pay for the prom himself if it was integrated, but the offer was rejected by school administrators. It wasn't until Freeman made the offer again in 2008, with a documentary film crew by his side, that school officials accepted.

In Charleston, 60 percent of the inhabitants are black, in a town with a population of only 2,200. About 400 students attend Charleston High, 70 percent of whom are black and 30 percent white. The prom organized each year in Charleston for white students was always completely off limits to black students. As the filmmaker Paul Saltzman explained in Reuters: "But the black proms were never segregated. Whites could always go but almost never did because of social pressures in the town," he said. "The power structure of the town was quite happy with separate proms and the school board, in a sense, didn't do anything proactive."

The documentary chronicles the historic journey taken by students, as well as the community, as seniors came together to challenge tradition and to make preparations for the school's first-ever integrated prom held in April 2008. 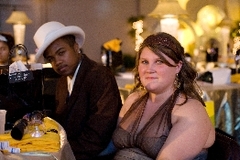 It was not an easy process. As the film shows, the mass majority of the resistance to integration came from the parents and adults. In fact many white parents forbade their children to attend the integrated prom, and went on to organize a separate "whites only" prom. The film also detailed the community's views on interracial dating and interracial friendships through interviews with students, school officials and parents. White students revealed that they were often frightened of how their families would react if they were to make black friends.

For some viewers the documentary will be an eye-opener, for others a reminder of the challenges still present 54 years after the Supreme Court ordered an end to segregated public schools -- challenges facing not only the Deep South, but the nation.

As a reviewer at the Huffington Post pointed out:


...Saltzman's film, far from capturing a dying tradition, taps into a new era of educational segregation in this country, with recent reports that conclude the nation's schools are more racially segregated now than at any other time since 1954. Which makes Prom Night in Mississippi that much more important to watch.

As Saltzman himself explained in an interview:

I knew going in that there had been separate proms all these years and that much of that had to do with fear of change, and fear that by stirring up the racial question somehow the horrid past would come forward again. And what I learned is that people in Charleston (and I believe this is true everywhere) do not really talk about the kind of issues that lie under the surface, that often control our behavior.

Race has been a hot topic of debate this past month in the media, as we saw in the Supreme Court confirmation hearings of Judge Sonia Sotomayor, the discussion around the segregated swimming pool in Philadelphia, and the recent arrest of notable Harvard scholar Henry Louis Gates Jr. As racial justice advocates proclaim, this nation still has far to go in dealing with racism.

The segregated proms of my high-school years are a memory that has stayed with me into adulthood, filtering through my mind every time I hear someone proclaim the United States a post-racial country. And this week I was once again reminded of the fact that a couple of months ago my 16-year-old niece attended a segregated prom in my hometown.

Prom Night in Mississippi, which first premiered at the 2009 Sundance Film Festival, started airing this week on HBO. It will be repeated multiple times in July and August, so for a full schedule, please visit HBO and the film's Web site at promnightinmississippi.com.

Charleston and the South's sordid history of attacks on black churches