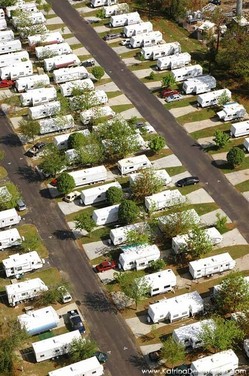 A report released last week by the Department of Homeland Security's Office of Inspector General blasts the Federal Emergency Management Agency's slow response to the health hazards found in post-Katrina emergency housing.
According to the report, following the hurricanes of 2005, FEMA took too long to tell hurricane victims about the risks they faced by living in the trailers as they repaired homes damaged by storms.
Facing South has reported extensively on the dangerous formaldehyde-contaminated trailers provided to families displaced by Hurricane Katrina by FEMA.
The new federal report outlines the mismanaged way FEMA handled reports of formaldehyde in the trailers, and it confirms what community advocates and environmentalists have been saying for years: FEMA failed to react quickly to respond to initial reports of dangerous levels of formaldehyde in trailers, endangering the health of thousands of people across the Gulf Coast.
As early as October 2005, just two months after Katrina, testing by the Occupational Safety and Health Administration found high formaldehyde readings, but FEMA did not move to correct the problem. Becky Gillette, director of the Sierra Club's formaldehyde campaign, was first to raise the alarm publicly about high levels of the cancer-causing chemical in the Katrina trailers. In early 2006, independent tests conducted by the Sierra Club revealed dangerously high levels of formaldehyde in FEMA trailers, but FEMA still did not take the matter seriously and denied the problem for two years before testing occupied trailers, informing residents of the extent of formaldehyde problems and potential health threats, and finally confirming the high levels and moving people out of the trailers.
Moreover, when the federal tests were finally performed, they occurred during winter when formaldehyde levels are lowest, the report says. According to the report, because of FEMA's delays, the test results may have underestimated the extent of formaldehyde exposure that these residents had experienced.
As the report found:

Nearly one-third of the trailers provided to victims of hurricanes Katrina and Rita were eventually projected to have significant potential formaldehyde problems. [FEMA] officials, in our opinion, did not take sufficiently prompt and effective action to determine the extent of the formaldehyde problem in the emergency housing units once they were aware that such a problem might exist.
...
The FEMA study of unoccupied units not only failed to address the occupied units that were of most concern, but its results were not fully disclosed. Although FEMA subsequently arranged for the Centers for Disease Control and Prevention to perform a study of formaldehyde levels in occupied trailers, FEMA caused delays that blocked the study's progress on two occasions. In general, in our opinion, FEMA did not display a degree of urgency in reacting to the reported formaldehyde problem, a problem that could pose a significant health risk to people who were relying on FEMA's programs.

Furthermore, FEMA did not have a formal policy or procedure to deal with resident complaints about health problems caused by formaldehyde in trailers. This caused confusion and inconsistencies in the manner in which complaints were treated.

Critics of FEMA's response say that the agency was more concerned with maintaining good publicity in the media than in addressing health risks. As CNN reported, not only was FEMA too slow to address early reports of formaldehyde problems, the agency also overstated the actions it was taking to correct the problem, adding:

The highly critical 80-page report paints the picture of an agency that was overly concerned with its image to the detriment of the public. FEMA, the report says, reacted to the formaldehyde health threat only after media attention "grew to disturbing levels" and once delayed testing so the agency could "develop a public communications strategy" for the public and the media.

Following hurricanes Katrina and Rita, nearly 134,000 federal trailers housed storm victims. Most residents have since moved out of the trailers and mobile homes, though about 3,000 households in Louisiana and Mississippi remain in the trailers. Formaldehyde is known to cause cancer and serious respiratory illnesses.

Gulf Watch: FEMA's slow pace and high-denial rate for assistance is a major barrier to recovery on the Texas Coast

Despite toxic risks, FEMA will give empty Katrina mobile homes to tornadoes' homeless