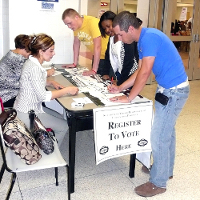 Perhaps the most impressive recent success story in expanding political participation has been the dramatic turnaround in public agency voter registrations in some states. With the prodding of Demos, Project Vote, and others under the umbrella of the NVRA Project, several states have reinvigorated compliance with this federal law that requires that certain state agencies offer voter registration to the individuals they serve. The most well known agencies are motor vehicle departments, but public assistance agencies are also included and it is them that can have the most impact on bringing low-income and marginalized citizens into the political process.

When states have decided to prioritize compliance with the federal law, improvements have been startling. The most recent success story, according to a new NVRA Project report, is Missouri. Less than a year ago the state was registering less than 8000 voters a year at its public assistance agencies, since it was ordered to fully comply with the federal law registrations have reached 100,000 in eight months. This kind of change has happened in other states like North Carolina on a voluntary basis when advocates approached them. In Missouri it took legal action.

After a strong success in Missouri, Demos, Project Vote and other partners are pursuing a legal remedy over the lack of compliance of two other states - Indiana and New Mexico. Since the laws requirements are clear, it is only a matter of time before these states are fulfilling their duties to register their most vulnerable and powerless citizens. Of course, legal action is only pursued when states refuse to comply. Colorado, California, and New Jersey have also been notified that they are not in compliance, and hopefully they will look at the track record of success and choose to join that movement instead of dragging their feet.

The South's low-wage workers are building 'a movement that votes'

Can vote-by-mail fix those long lines at the polls?