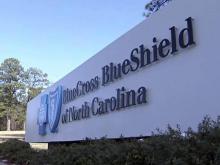 Blue Cross Blue Shield has been at the forefront of opposing the public option health plan. As the Washington Post reported in May, BCBSNC has produced several videos -- unaired as of yet -- against a government-sponsored health insurance option.

"We need Blue Cross to stop using our premiums to prevent real health care reform and to stop standing in the way of a public option," Adam Searing of the of the N.C. Justice Center's Health Access Coalition, told the Carrboro Citizen.

As Facing South reported earlier this month, health insurance premiums have skyrocketed, due in part to private insurers' near-monopolies in many states. BCBSNC has a 72.5 percent market share of individual and employer-provided health insurance in North Carolina.

Members of the State Employees Association turned out to the protest, calling for BCBSNC to support a public option that would lower costs to provide quality, affordable health care for all. SEANC members said that BCBSNC has had skyrocketing premiums, co-pays, and deductibles in the last year. In fact, premiums were so expensive that many people were unable to afford health coverage for their spouses or children.