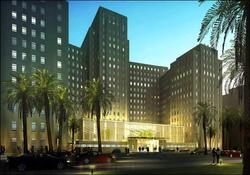 As the health care debate rages on the national scene, in New Orleans the future of health care also remains uncertain.

Louisiana lawmakers are mired in ongoing payment disputes with the Federal Emergency Management Agency over how much damage Hurricane Katrina caused Louisiana State University's Charity Hospital, a shuttered 20-story teaching facility that once served the city's poor, indigent and uninsured.
Facing South previously reported on the dispute over Charity Hospital. Closed since Hurricane Katrina, the deteriorating hospital has come to symbolize the decaying health care system in the Crescent City, where thousands live without health insurance and without a safety-net hospital.
Earlier this week, Lt. General Russel Honoré - former commander of the Joint Task Force Katrina - said Charity Hospital "could have been reopened" in the aftermath of Hurricane Katrina when the military scrubbed it to medical-ready standards. In a recent interview with the Associated Press, Honoré explained that in September 2005, when the city only had an emergency trauma center in the city's convention center, he thought state officials would want to reopen the first few floors of Charity to provide improved health care. According to Honoré, former Gov. Kathleen Blanco told him "no" -- that Charity would not reopen and that the state was "working on a different plan."
Honoré's story of Charity's cleanup supports the accounts of other military officers and volunteers who helped to clean the building and make it operationable following the storm. But the state and LSU still claimed the hospital was too damaged to open.
As the AP reported:

In documents filed with FEMA, the state said a damage assessment was done at Charity within the first two weeks after Katrina. Citing floodwater in the basement, wind damage to the roof, widespread mold and human and medical waste, they claimed the hospital was destroyed.

But the military and workers on the ground have always told a different story: When the 82nd Airborne Division arrived in the ravaged city in early September 2005, Charity was identified as key. It was in the center of town and provided a lot of people care, said the division's commander, Gen. William Caldwell.

About 150 soldiers and a team of medical professionals worked to get the hospital running, Caldwell said.

Meanwhile, a German military team's pumps sucked water out of the basement. Air sampling found no contamination - a concern, considering the flooding and bodies in the flooded morgue, Caldwell said.

Caldwell recalled telling Honore the hospital was nearly ready to receive patients.
...
But then, Caldwell said a decision came to stop the cleanup.

Dr. James Moises, a former Charity emergency room doctor who helped clean the hospital after Katrina, said Charity was made useable, and the medical staff was eager to see it back in use. Moises said state officials used Katrina as an excuse to close Charity and ask FEMA for the money to build a new medical complex. Moises said: "It was their orchestrated plan. It was, 'How can we manipulate the disaster for institutional gains?'"

These reports further corroborate what community advocates have been reporting since the hurricane: Charity could have been reopened in the aftermath of Katrina and was not as badly damaged as the state claimed. Activists have accused LSU and state officials of lying about the circumstances surrounding the hospital in an effort to secure "unwarranted FEMA dollars" to construct a new hospital that LSU wanted to build even before Katrina. Advocates argue that Katrina has been used as an opportunity to close the doors of Charity, and to use disaster funds in a way that is now hurting the city's most vulnerable.
Instead of reopening Charity, LSU wants to build a new $1.2 billion, 424-bed medical mega-complex, which is expected to break ground in 2013. After the storm, FEMA offered the state $150 million for "storm-related" damages to the current Charity building. But state officials have claimed that Charity was "completely destroyed" by Katrina, arguing that FEMA instead owes Louisiana $492 million to replace it. Under the federal Stafford Act, FEMA has to pay the full cost of replacing Charity if, as LSU contends, it was more than half damaged in the storm. When denying LSU's claims, FEMA insisted that much of the deterioration in Charity's condition was a consequence of LSU's negligence after the storm.
The dispute between federal and state officials runs parallel to the grassroots battle in the city over Charity. Groups of citizens, activists, medical professionals, and preservations are standing against the state's plans to put disaster assistance money toward a new complex when the state could easily renovate and refurbish the current Charity building. Repairing Charity is a strategy communtity advocates say would return quality care to the region in less time and for less money than new construction. 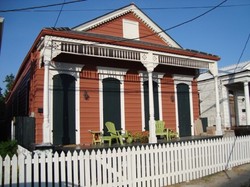 Activists also say that repairing Charity would prevent leveling an historic, African-American neighborhood. In order to build the new $1.2 billion complex, the state plans on tearing down 67 acres of the Mid-City area. Mid-City is a historic district, rich in iconic New Orleans-style architecture, such as pastel-colored Creole cottages and shotgun houses. The decision to clear the area has shocked residents and preservationists.
Preservationists say that Charity, one of the oldest hospitals in the country, is the premier examples of Art Deco architecture in the Deep South, and its rehabilitation would provide the most sustainable way to create a contemporary hospital while preserving a key part of the city's history. In 2008, the National Trust for Historic Preservation listed Charity Hospital and the Lower Mid-City neighborhood on its list of America's 11 Most Endangered Historic Places.
Furthermore, activists point out, refurbishing Charity is the more fiscally responsible plan and would save the state hundreds of millions of dollars. A report released in 2008 by Philadelphia-based RMJM Hillier, an independent consulting firm, confirmed that Charity is structurally sound and viable. The firm concluded that a $484 million investment could transform the one-million-square-foot building into a state-of-the art, modern medical facility for local residents.
The Battle Lines are Drawn
The National Trust for Historic Preservation, a congressionally chartered preservationist organization, filed a lawsuit in May 2009 against FEMA and the Department of Veterans Affairs, claiming that their involvement in the plan to bulldoze part of the historic district to make way for two new hospitals is illegal. The groups said the agencies failed to consider the impact and "adverse effects" of building the new hospitals and failed to follow environmental regulations when the sites were chosen.
According to the preservation group, the 67-acre site chosen for new hospitals would require bulldozing 25 square blocks, containing 165 historic properties in the Mid-City Historic District, including homes renovated by their owners after Katrina. Overall, the suit alleges, the project would require the demolition of approximately 265 residential housing units and the displacement of 600 people, 85 percent of whom are minorities and 40 percent who are living below the federal poverty line. 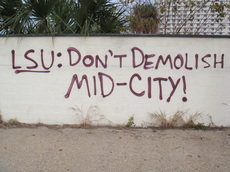 A class action lawsuit was also filed in January 2008 by seven uninsured New Orleanians with chronic health care problems alleging that LSU's closure of Charity violated state law and has systematically denied health care services to tens of thousands of the poor and uninsured in the region. The pending lawsuit argues that LSU could have reopened the hospital in the days after Katrina, but chose not to because of its desire for a new hospital.
Outside of the legal battles, the debate has also reached the state legislature. Earlier this summer, Louisiana lawmakers debated House Bill 780, which would would have prohibited the state from proceeding with private property seizures until LSU can prove that they can actually raise the money to realize the project. HB 780 easily passed through the state House, but stalled in the state Senate.
The City's Health Crisis
In the meantime, thousands of poor residents in New Orleans remain without access to a public hospital. Doctors and community leaders say the situation has only worsened as state officials wrangle with each other and argue about funding for a new facility.
Community advocates point out that the shutting down of Charity, much like the destruction of the city's public housing, has been a clear sign that poor people just aren't welcome in the city. Hospital-based services for those without health insurance are almost non-existent. Charity was the central location for the city's poor and uninsured to come for medical care. Before Katrina, around 176,000 people without insurance were living in New Orleans. Around 75 percent of Charity's patients were African American and 85 percent were low-income.
The hospital's closure forced needy residents to turn to the few overcrowded, understaffed private hospitals and clinics still operating. Uninsured patients in need of specialists have to travel to Charity hospitals in other parts of the state, where the waiting time for an appointment is typically months long. Some uninsured patients may even decide to forgo treatment when faced with these choices.
As the Times-Picayune reported in 2008:

Patients who cannot make the trip to far-flung public hospitals have washed up in the emergency rooms of private hospitals in the area, where they rack up bills they cannot pay. The flood of indigent patients also has caused a hardship for doctors.

In April, doctors at West Jefferson Medical Center sued the state for failing to pay them for taking care of thousands of patients who used to go to Charity.

A May 2009 article by the Economist further details the health care crisis in the city today:

Most important, though the number of chronically sick in the city has risen sharply, medical services remain in tatters. Only 57% of the city's medical facilities have reopened, and tens of thousands of records have been lost.
...
Even in hospitals that are functioning again, medical staff are in short supply and treatment has become riskier. Emergency-room medics complain of having to treat too many desperately ill patients simultaneously. This increases the chance of both mistakes and lawsuits. That fear has led some doctors who live in the city to commute to hospitals far outside New Orleans rather than work locally. Even before the storm, Louisiana was the least healthy state in America. In the past few years, however, levels of sickness have risen sharply. Almost two-thirds of New Orleans residents now report chronic health problems, a 45% rise since 2006. The percentage of people suffering from mental difficulties, mostly depression, has tripled since then, and the suicide rate has doubled since 2005. For months thousands of people were housed in temporary trailers which were poorly ventilated and contained high levels of formaldehyde. In the houses which were left habitable, mould and spores grew during the many humid weeks when the city lacked electricity. As a result, respiratory and skin problems are rife.
...
The situation is expected to deteriorate in the coming years. Nearly 20% of people are now without health insurance. One in four say the emergency room is their primary source of care and, as the recession bites, that proportion is growing.

As we approach the the fourth anniversary of Hurricane Katrina, it is apparent now more than ever: New Orleans is a city starving for health care.