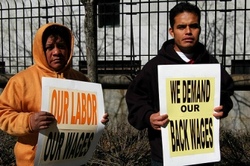 Post-Katrina New Orleans has become the center of a national effort to protect migrant day laborers from wage theft.

As Facing South has covered, following the 2005 hurricane season, the Gulf Coast region saw an explosion in its Hispanic population, particularly in New Orleans where migrant workers came to fill the construction jobs that opened up during the post-Katrina recovery effort. Estimates indicate the New Orleans metro area's Hispanic population has tripled in the last three years, from about 60,000 to about 180,000.

Many of New Orleans' Hispanic migrant workers have faced rampant wage theft, coercion and abuse. Following the hurricanes, in what labor rights advocates have called the "disaster after the disaster," hundreds of contractors along the Gulf Coast employed migrant workers to clean up debris, repair damaged roofs and restore flood-soaked buildings, Contractors then reneged on promises to pay workers after that work was completed. The exploitation has been especially rampant in New Orleans, where thousands of workers employed by construction contractors to rebuild homes are still routinely shortchanged and denied promised wages once the work is completed.

In fact, according to a recent study by the Southern Poverty Law Center, New Orleans has the highest incidence of wage theft in the South. Of those workers surveyed by SPLC, a whopping 80 percent of the workers said they were victims of wage theft while working in New Orleans' recovery since Hurricane Katrina. A 2008 survey of 300 day laborers indicated they had worked a total of 12,000 unpaid days and lost a total of $400,000 in wages, reports the New Orleans CityBusiness.

There are very few legal options for migrant workers, and the current laws on the books aren't enough to protect workers, day labor advocates say. Simply put, there are no criminal statutes that hold contractors who practice wage theft legally accountable for their actions. 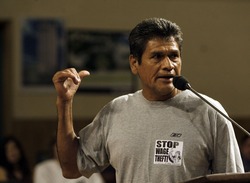 New Orleans day laborers and labor rights advocates have been campaigning to stop wage theft, and to end the abuse, intimidation, exploitation and discrimination against migrant day laborers. Organizing with the New Orleans Congress of Day Laborers, a project of the New Orleans Workers' Center for Racial Justice, workers have urged local lawmakers and officials to pass tougher laws that would classify shortchanging or denying wages to a hired day laborer a crime.

Workers brought their case before the New Orleans city council in a public hearing in late June, testifying to the rampant abuse in the sector. New Orleans Councilman Arnie Fielkow has started working on a city ordinance, which he hopes to have drafted by August, that would protect day laborers by criminalizing wage theft.

Under state and federal law wage theft is a civil offense, which means workers can file civil suits against employers in small claims court, but often migrant workers face challenges to taking such measures. Fielkow's ordinance would instead make wage theft a criminal offense, allowing cops to arrest violators. Supporters of the ordinance hope the law will empower the New Orleans Police Department to crack down on offending contractors and discourage employers from violating wage laws.