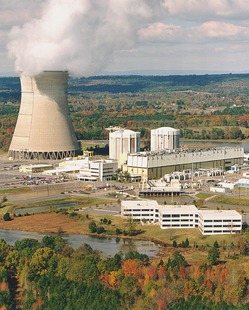 U.S. lawmakers are considering legislation that would create a new independent federal agency to promote government investment in clean energy.

But watchdogs are raising questions about whether the way the proposed agency is structured is unfair to taxpayers and bad for the environment. Among their concerns are its bias toward nuclear power -- a critical issue for the South, which is at the center of the nuclear industry's planned revival.

"We support the financing of clean energy technologies to promote the domestic development and deployment of technologies that will reduce greenhouse gas emissions in the most efficient, environmentally sound manner possible," stated a recent letter to lawmakers signed by 17 environmental groups. "However, the proposed Clean Energy Deployment Administration (CEDA) will not achieve these important goals and will in fact, as drafted, pose unnecessary and potentially enormous risks to our environment and to the U.S. taxpayer."

CEDA would be established within the Department of Energy through legislation titled the "21st Century Energy Technology Deployment Act" introduced by Senate Energy and Natural Resources Committee Chairman Jeff Bingaman (D-N.M.) and ranking member Lisa Murkowski (R-Alaska) and set to be combined with the Senate version of the climate bill. CEDA would provide billions of dollars in taxpayer-financed credit, including loans and loan guarantees, to the private sector to invest in energy technologies.

Similar legislation was also introduced in the House by U.S. Rep. Jay Inslee (D-Wash.) and added via amendment to the recently approved House climate bill, the American Clean Energy and Security Act (H.R. 2454) that passed June 26 by a vote of 219-212.

There are significant differences between the House and Senate CEDA proposals, with the version now being considered in the Senate drawing strong criticism from sustainable energy advocates. Some of the key concerns:

* The Senate version allows unlimited loan guarantees without congressional oversight. It provides an exemption from Section 504(b) of the Federal Credit Reform Act, circumventing the congressional appropriations process and relying instead on the White House Office of Management and Budget's model calculating default risk and how much of that cost of that risk should be borne by the company. The House version of the legislation doesn't include this exemption, which means CEDA would have to get congressional approval for requested loan guarantees. Both the Congressional Budget Office and the Government Accountability Office have warned that the default risk cost is hard to calculate and is likely to be underestimated, leaving taxpayers to bail out private companies that can't make their loan payments.

* The Senate version does not include a greenhouse gas metric. That is, the bill does nothing to ensure priority is given to those technologies that cut the most greenhouse gas emissions per dollar invested in the shortest amount of time. The House version, on the other hand, requires that priority be given to projects that cut greenhouse gases the quickest and cheapest.

Given those provisions -- coupled with the Senate climate legislation's general friendliness toward nuclear power, which it calls a "clean and secure domestic energy" whose use should be expanded -- energy policy expert Michele Boyd of Physicians for Social Responsibility said during a recent discussion of the bill that CEDA could essentially act as a "slush fund" for nuclear power. That would be a bad deal for taxpayers, given how costly nuclear power is compared to other more environmentally sustainable energy sources.

How much more expensive? A recent study [pdf] by Mark Cooper of the Vermont Law School's Institute for Energy and the Environment estimated that new nuclear plants will cost between 12 and 20 cents per kilowatt-hour compared to an average of 6 cents for efficiency and renewables. Cooper calculated that the plan being promoted by Senate Energy Committee member Lamar Alexander (R-Tenn.) to build 100 new reactors across the United States would result in up to $4 trillion in costs over and above what it would cost to generate the same equivalent power from efficiency and renewables.

How did the Senate's CEDA proposal end up so biased toward nuclear power -- even though the technology is not only expensive but also a poor solution to the global warming problem due to its long construction time, the nuclear fuel chain's sizable carbon footprint, and nuclear plants' considerable heat emissions? It might be helpful to consider the relationship between the measure's primary sponsors and the nuclear power industry.

When he was last up for re-election in 2006, Sen. Bingaman was the top Democratic recipient of campaign cash from the Nuclear Energy Institute PAC, which represents the interests of the nuclear industry, according to the Center for Responsive Politics' OpenSecrets.org database. He received $6,000 from NEI's PAC that year, tied with Independent Sen. Joe Lieberman of Connecticut and surpassed only by three Republicans -- Mike DeWine of Ohio, Rick Santorum of Pennsylvania and James Talent of Missouri -- who received $7,000 each. When co-sponsor Lisa Murkowski was up for re-election in 2004, NEI contributed $6,000 to her campaign, according to OpenSecrets.org. Altogether since 2000, Bingaman has received a total of $7,999 from NEI and Murkowski $9,500.

And Bingaman has gotten more from NEI than just money: In 2006, he also won NEI's William S. Lee Award for Leadership, asking the lobbying group in his acceptance speech to "do your part to use those tools that Congress has put in place to ensure that nuclear power achieves its potential as part of our future energy mix." It now appears the industry is doing just that -- with Bingaman's help.

But watchdogs are fighting back against the legislation's proposed nuclear giveaways. They are calling on concerned citizens to write to their Senators and President Obama and ask them to oppose any additional taxpayer subsidies for the nuclear power industry in the climate legislation. As PSR notes, the industry's own estimates say it already stands to profit by $1 billion a year from a carbon cap.

"We can have nuclear power or we can address the climate crisis," the Nuclear Information & Resource Service says in its call for action on the legislation. "We can't do both."