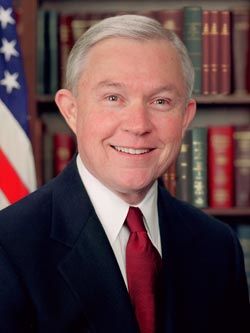 There's more than a little irony in some of the questioning U.S. Sen. Jefferson Beauregard "Jeff" Sessions III has subjected Supreme Court nominee Sonia Sotomayor to during this week's confirmation hearings.

The Alabama Republican -- the top GOP member of the Senate Judiciary Committee and a former prosecutor and state attorney general -- has led the charge for his party, raising concerns about Sotomayor's impartiality.

In particular, Sessions and other Republicans have expressed worries about Sotomayor's comment in a 2001 lecture that "a wise Latina woman with the richness of her experience would more often than not reach a better conclusion than a white male who hasn't lived that life."

"That's troubling me," Sessions said at one point during the hearings. "That's not impartiality."

Responding to Sessions, Sotomayor said she made the remark in the context of a speech to young Latino students and lawyers that aimed to make them believe their life experiences were valuable, but that ultimately it was a "rhetorical flourish that fell flat."

But what of Sessions' own racial impartiality? After all, his 1986 nomination by President Ronald Reagan for a federal judgeship was killed by the Senate Judiciary Committee over his history of racist actions and comments.

A year before Reagan nominated him, Sessions -- who was then serving as U.S. Attorney for the Southern District of Alabama -- was involved in a controversial and ultimately unsuccessful voter fraud prosecution of three civil rights workers, including a former aide to Martin Luther King Jr. As writer Sarah Wildman described the case in a 2002 story in The New Republic:

The three had been working in the "Black Belt" counties of Alabama, which, after years of voting white, had begun to swing toward black candidates as voter registration drives brought in more black voters. Sessions's focus on these counties to the exclusion of others caused an uproar among civil rights leaders, especially after hours of interrogating black absentee voters produced only 14 allegedly tampered ballots out of more than 1.7 million cast in the state in the 1984 election. The activists, known as the Marion Three, were acquitted in four hours and became a cause célèbre. Civil rights groups charged that Sessions had been looking for voter fraud in the black community and overlooking the same violations among whites, at least partly to help reelect his friend Senator Denton.

Other Sessions' comments that came to light in those hearings, according to TNR:

* He criticized the National Association for the Advancement of Colored People and the American Civil Liberties Union as "un-American" and "Communist-inspired" and said they "forced civil rights down the throats of people."

* He called a white civil rights attorney a "disgrace to his race" for litigating voting rights cases.

* He once said he used to think Ku Klux Klan members were "OK" until he found out some of them were "pot smokers."

* He called Thomas Figures -- a black former assistant U.S. Attorney in Alabama -- "boy" to his face, and after hearing Figures criticize a secretary warned him to "be careful what you say to white folks."

Even Sessions' own home state senator, the late Howell Heflin, voted against his nomination.

Despite being rejected for the federal judgeship, Sessions went on to be elected Alabama attorney general in 1994. Two years later he was elected to the U.S. Senate, where he has earned a 7% approval rating from the NAACP.

Curiously, Sessions' history of racial insensitivity has been overlooked in the mainstream press. On July 14, for example, five major U.S. newspapers reported on Sessions' opening statement at Sotomayor's confirmation hearing without any mention of his 1986 rejection by the Senate Judiciary Commission for the racially charged comments, reports Media Matters for America.

From prejudice to progress: The political evolution of Sen. Robert Byrd

The politics behind Sen. Graham's 'yes' on Sotomayor