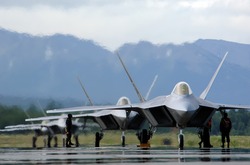 In what is being called a political victory for the Obama administration, the Senate voted Tuesday to halt further production of the Air Force's F-22 Raptor fighter jets, one of the nation's most expensive defense programs.

Despite intense lobbying by supporters of the program, the 58-40 Senate vote stripped $1.75 billion for an additional seven F-22s from the 2010 budget, reversing an earlier Senate committee decision to include money for the program. Obama had threatened to veto the entire defense budget if it included money for the F-22.

According to the Los Angeles Times, the F-22, which has not been used in Iraq or Afghanistan, has come under particular scrutiny for its huge price tag. The Pentagon has invested an estimated $65 billion in the program since it began, and each aircraft costs an estimated $44,000 per hour to operate.

As Facing South reported, many of the key Congressional supporters of the F-22 program represent states where jobs are tied to the production of the jet. Sen. Saxby Chambliss (R-GA), has led the fight to save the planes, which is no surprise to observers since the fighter jets are manufactured by Lockheed Martin at a plant in Marietta, Ga.

As we reported earlier this year regarding Southern senators ties to military spending: "One unmentioned issue underlying much of the debate, however, is the degree to which certain parts of the country depend on military spending for economic growth -- and how that's influencing the debate over the military budget." The four Republican senators from Georgia and Texas, usually staunch opponents of greater government spending in general, voted to keep money for the planes in the bill.

Even though the Cold-War era aircraft has never been used in war, Chambliss and other proponents of the plane, which was originally designed to counter a potential Soviet threat, say it could still be used against possible future wars with countries like China. Proponents have also argued the importance of protecting jobs in states like California, Texas and Georgia. Lockheed, the prime contractor for the F-22, has claimed that as many as 25,000 people are directly employed in building the F-22, and an additional 70,000 have indirect links.

But as the Huffington Post reported, the jobs argument doesn't hold much water:

So, what argument do F-22 advocates have left? Jobs. But even here, their claims don't hold up to scrutiny. Lockheed Martin's original claim of 95,000 jobs sustained by keeping the F-22 program going was so fraudulent that they decided to take down the Web site -- preserveraptorjobs.com -- that was used to trumpet those numbers.
...
Last but not least, funding the F-22 will cost more jobs than it will create. According to a 2007 study by economists at the University of Massachusetts, military spending creates fewer jobs than virtually any other form of government activity, from a tax cut to education to mass transit to energy efficiency. Spending $1.75 billion on F-22s instead of a tax cut would cost 4,000 net jobs; spending the same $1.75 billion on F-22s instead of mass transit would cost nearly 20,000 net jobs.