In the early morning hours of December 12, 2006, Immigration and Customs Enforcement agents swept into Swift & Co. meatpacking plants in six states, rounding up detaining thousands of workers in one of the largest immigration raids in U.S. history.
A new report by a national commission of labor leaders, former elected officials, academic researchers and legal experts found ICE abused workers and violated their constitutional and civil rights in the Swift raids.
The report, Raids on Workers: Destroying Our Rights, details how thousands of workers at the six Swift plants were herded together at gun-point -- at one plant shots were even fired -- and were denied access to bathrooms, food, water, families and legal counsel for hours.
The commission found that during the Swift raids:

Some workers were interrogated, accused of lying and badgered during contentious questioning...Union officials were denied access to the worksites. Citizens and legal residents were denied the opportunity to retrieve documents to establish their legal status. Some were handcuffed and held for hours. Others were shipped out on buses. Families, schools and day care centers could not be contacted to make arrangements for the children of detained workers. Families were left divided--not knowing where or when they might see a missing family member again.

According to the report the execution of the Swift raids was part of a wider pattern of ICE misconduct occurring across the country. These Bush-era enforcement tactics routinely led to systemic abuse of workers' rights and a willful disregard for the rule of law, according to the report. Moreover, the report found that military-style ICE raids were used "less as an effective law enforcement tool and more as a way to grab headlines and stir hysteria around immigration and immigrants."
Other findings from the report: 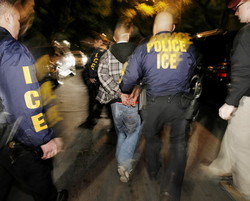 The past few years have seen one of the largest immigration enforcement crackdowns take place in the United States, with raids that have swept across the country and arrested thousands. The South was the site of several major ICE raids during that period.
The United Food and Commercial Workers International Union, the main group behind the new report, spent the last two years studying violations that occurred under the Bush administration's immigration enforcement policy. It founded the national commission to investigate the problems, holding five hearings across the country to take testimony and gather evidence of ICE violations. The UFCW has also filed class-action lawsuit in federal court, alleging mistreatment of workers and violation of constitutional rights by federal agents.