Skip to main content
Defend democracy in the South.
Donate Today
By Desiree EvansJuly 24, 2009
U.S. workers earning minimum wage will see an 11 percent increase in their wages starting July 24 when the national minimum wage rises to $7.25 an hour.
About 2.2 million low-income workers make minimum wage or less, according to the Bureau of Labor Statistics. The largest numbers are in the service sector, in occupations like food preparation, sales and retail.
The raise, which will affect thousands of employees who are covered by the federal Fair Labor Standards Act, may offer some relief to America's struggling low-income workers. The increase is still far from a living wage that could bring thousands of workers out of poverty, but an increase is seen as an important step as low-wage workers struggle to pay rent in the economic downturn.
The minimum wage increase, the last of a three-step increase ($5.85 to $6.55 to $7.25) provided by the Minimum Wage Act of 2007, affects workers in 30 states where the state minimum wage is at or below the federal minimum wage, and in states that have no minimum wage, reports UPI. That includes many Southern states, such as Louisiana, South Carolina, Tennessee, Mississippi and Alabama, which have no minimum wage laws. 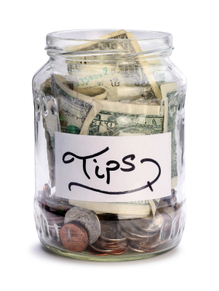 Yet, one group of low-wage workers won't be seeing the increase. Across the country there are thousands of service-sector employees who make much of their income based on gratuities -- including waiters, waitresses, hotel workers, attendants and bartenders. The federal minimum wage for these tipped employees has been frozen at just $2.13 for the past 18 years, leaving millions of workers in poverty.
A new report by the National Employment Law Project calls for federal legislation that would raise the federal minimum wage for tipped workers, a sector of low-wage workers that Congress has overlooked the last few times that it has increased the minimum wage.
According to NELP, failure to raise the minimum for tipped workers has resulted in dragging down pay for all tipped workers - overwhelmingly adult women, many of them supporting families - in the fast-growing service industry. According to the NELP report, the median pay for tipped workers, combining wage plus tips, was just $8.23 an hour in 2007 dollars, an amount below the poverty level for a family of four. And in times of economic crisis, that number is even lower.
As NELP explains in their report:

The low minimum wage for tipped workers, which forces these employees to subsist almost entirely on tips, is a key factor behind falling living standards and growing economic insecurity for workers in tipped industries. Since the tipped worker minimum wage was frozen at $2.13 in 1991, its value has fallen by 36% in real terms. Workers who are forced to rely mainly on tips see their paychecks fluctuate widely, frequently leaving them unable to pay their bills or provide for their families. This problem is now worse than ever because economically squeezed customers are leaving smaller tips. As a result, waitresses and waiters--the largest group of tipped workers--have three times the poverty rate of the workforce as a whole.

What does Walmart's wage hike mean for workers?