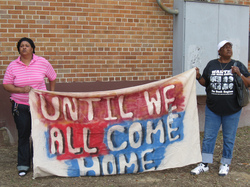 An United Nations advisory group headed to New Orleans this week on a fact-finding mission to investigate housing issues related to the displacement of residents following Hurricane Katrina.

The Advisory Group on Forced Evictions, a group of international housing experts, spent the week meeting with and interviewing New Orleans residents struggling with affordable housing issues. As the Times-Picayune reported, the group talked to "homeless people living in abandoned buildings, former public-housing residents from the demolished 'Big Four' complexes, low-income people struggling with steep post-Katrina rents and Mid-City residents whose houses are in the footprint of a proposed Louisiana State University hospital."
The United Nations has shown a special interest in New Orleans since Katrina (this will be the third visit by an international authority in the past three years). The UN has issued several statements on ways the U.S. response to Hurricanes Katrina and Rita violated international human rights law.
Activists in New Orleans have used the international human rights framework as a way to address the lingering issues in post-Katrina rebuilding, such as the right to housing. In 2008 UN experts on housing and minority rights took up the call, urging the United States to stop the demolition of public housing and protect the human rights of African-Americans disproportionately affected by Hurricane Katrina.
The National Economic and Social Rights Initiative, a group that promotes human rights in the United States, helped to coordinate the fact-finding mission. NESRI points out that U.S. policies aimed at private sector development have prevented the return of a quarter of the New Orleans population and contributed to a significant rise in homelessness. The group explains that what's unfolding in New Orleans is result of "a rebuilding process that favors private sector interests over the interests of residents":

While post-Katrina redevelopment policies have had a disproportionately adverse impact on poor and low-income African American communities, the ongoing lack of affordable housing, and the evictions to make way for private sector development, is a significant issue for all residents of New Orleans and the Gulf Coast.

When they leave New Orleans, the U.N. advisory group will be traveling to Washington to meet with federal disaster-recovery officials. The group will also prepare a final report to UN-HABITAT, the United Nations agency charged with monitoring poverty and housing.
(Image: A rally at Lafitte Public Housing in New Orleans. Photo by NESRI.)