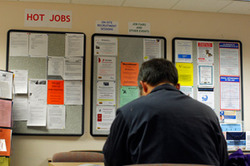 For the past few months we have been probing the increasing troubles of our nation's fractured unemployment insurance systems. Texas and Minnesota are the latest casualties, borrowing tens of millions of federal dollars so far to keep their unemployment insurance trust funds afloat.
So far, Texas has borrowed about $73 million, but anticipates borrowing about $643 million by October, and more before the end of the year, a combination of federal borrowing and issuance of bonds.
For years, Texas has maintained one of the country's lowest tax rates (PDF) (only three states had lower average tax rates in 2008), and an explicit policy of keeping reserves low as a way to stimulate job creation.
But that policy has been sustained by offering some of the stingiest benefits in the country. Only about a third of unemployed Texans received unemployment insurance last year, ranking the state 50th out of the 50 states. (Only the District of Columbia had a lower percentage.)
Earlier this year, Gov. Rick Perry refused the $555 million Texas could have claimed in stimulus funds for expanding eligibility for the program to low-income and part-time workers. Perry wrote in a recent op-ed that he rejected the money so "Texas job-creators and taxpayers will be protected from federal mischief."
Apparently that federal mischief does not include the interest-free loans Texas will get to keep the state's unemployment insurance system afloat. (Has your state taken full advantage of stimulus funding for unemployment? See this interactive map.)
To close the gap, Texas plans to raise tax rates for businesses -- in the middle of the recession -- undermining one of the purposes of the system, which is to act as automatic economic stimulus when the economy worsens.
At the moment, Minnesota's borrowing of $11 million is a cash-flow problem, state workforce department spokeswoman Kirsten Morell told ProPublica. As tax revenue from employers flows in at the end of the month, the state should be able to pay back its current loans, she said.
But that doesn't mean that Minnesota is in the clear. The state, still recovering from borrowing in 2005, had only a few months of reserves in its fund before the current recession struck and anticipates long-term borrowing at the end of this year and the beginning of next year, Morell said.
In June, we did an interactive feature highlighting the states that could face shortfalls in unemployment insurance trust funds. Unfortunately for the unemployed in Idaho, Illinois, Minnesota and Texas, we've been right so far.
Due mainly to poor financing, 18 states have now been forced to borrow just to keep unemployment checks in the mail.
(Image: U.S. employers cut far more jobs than expected in June and the unemployment rate hit a nearly 26-year high of 9.5 percent. Photo by Brian Snyder/Reuters.)