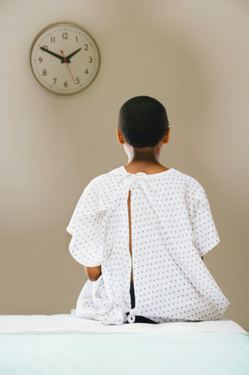 If President Barack Obama's drive for some form of universal health care falters the biggest losers by far will be blacks and Hispanics.
Blacks and Hispanics make up nearly half of the estimated 50 million Americans who have no health care insurance, according to a report by the Commonwealth Fund. But the danger signs for reform are real. A Washington Post/ABC News poll found that public support for Obama's plan is decreasing.
This is no surprise.
The instant Obama announced he would make health care reform his defining issue reform opponents kicked their attack into high gear. The two hit points are that it's too costly and too intrusive -- meaning that it will snatch from Americans the right to choose their own doctors and health plans and dump health care into the alleged slipshod, inefficient hands of government bureaucrats. The real fear of private insurers, pharmaceuticals and major medical practitioners is that they'll have to treat millions of uninsured, unprofitable, largely unhealthy blacks and Hispanics.
The huge racial disparity in the number of uninsured has been a sticking point for every Democratic president since Harry Truman proposed the first national health care plan in the late 1940s. The number of blacks and Hispanics without a prayer of obtaining health care at any price has always been wildly disproportionate to that of whites -- even poor whites. It has steadily gotten worse over the years.
The legions of black and Hispanic uninsured are far more likely than the one in four whites, who are uninsured to experience problems getting treatment at a hospital or clinic. This has devastating health and public policy consequences. A study by the Joint Center for Political and Economic Studies found that they are far more likely than whites to suffer higher rates of catastrophic illness and disease, and are much less likely to obtain basic drugs, tests, preventive screenings and surgeries. They are more likely to recover slower from illness, and they die much younger.
Studies have found that when blacks and Hispanics do receive treatment, the care they receive is more likely to be substandard than that of whites. Reports indicate that even when blacks and Hispanics are enrolled in high quality health plans, the racial gap in the care and quality of medical treatment still remains low.
Private insurers routinely cherry pick the healthiest and most financially secure patients in order to bloat profits and hold down costs. American medical providers spend twice as much per patient than providers in countries with universal health care, and they provide lower quality for the grossly inflated dollars. Patients pay more in higher insurance premiums, co-payments, fees and other hidden health costs. At the same time, government medical insurance programs shell out more than public insurers in other countries with universal health care.
With much fanfare, three major hospital groups and pharmaceuticals announced in June and July that they would plough more than $200 billion into health care reform. This appeared to be a major step toward breaking the age-old logjam on getting real health care reform. That's hardly the case. Neither the pharmaceuticals, the hospitals, nor private industry groups publicly pledged to fully drop their opposition to providing coverage and at cost medicines to those considered "high risk" or, less charitably, "undesirables." Those are the millions who suffer chronic and major diseases--cancer, diabetes, asthma and heart disease.
Blacks and Hispanics have far greater incidences of these ailments than whites. Even when they can pay for medical coverage, they can be excluded from coverage if afflicted with these medical maladies. The health care industry's reform plan is vague, tentative and subject to change at every step of the negotiating process. They still have a free hand to exclude high-risk cases from coverage.
The much-debated "public option" is the only government check and balance to guarantee coverage and treatment for the uninsured and those labeled as high risk. Yet, industry groups have mounted a major effort to kill outright or water the public plan down to where it is meaningless. In a press conference in June, Obama sent a mild signal that the public option is open to negotiation. Chief of Staff Rahm Emanuel went further and privately told opposing Republican Senators and doubting conservative Democrats that Obama would consider "alternatives" to the tepid government option. Emanuel didn't say what the alternative was other than a nod toward an even vaguer and unproven system of loosely regulated, nonprofit health care co-operatives.
For decades, the health care industry has gutted every proposal for expanded health care. It has couched its attack by posing as the noble public-spirited guardian of the nation's health and pocketbook -- arguing that a public plan is too costly, inefficient and entails too much heavy-handed government control and interference. As the Post/ABC News poll shows, more Americans are buying the industry's spin. This is catastrophic news for the millions of black and Hispanic uninsured who desperately need real health care reform.
Earl Ofari Hutchinson is an author and political analyst. His weekly radio show, "The Hutchinson Report" can be heard on weekly in Los Angeles on KTYM Radio 1460 AM and nationally on blogtalkradio.
Copyright © New America Media