Skip to main content
Defend democracy in the South.
Donate Today
By Guest BloggerJuly 14, 2009
By Jamie Henn, (reprinted from Wiretapmag.org) 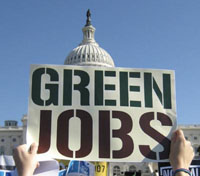 On June 26, Jerome Ringo rallied a crowd on the lawn outside the Capitol. "This bill is for the worker," boomed Ringo, president of the Apollo Alliance, a coalition of labor and environmental groups. "It's going to give that worker new manufacturing opportunities to get back to work again."

Inside the Capitol, the House of Representatives was passing the American Clean Energy and Security Act (ACES), the nation's first comprehensive energy and climate bill. The bill, which is now awaiting a vote in the Senate, aims to cut America's production of greenhouse gasses 17 percent by the year 2020.

Since President Barack Obama was inaugurated in January, the U.S. has seen an unprecedented surge in legislation and government programs aimed at stimulating a new, green economy.

Now, after years of campaigns and advocacy, many advocates feel like the green jobs revolution may have finally begun. With cold hard cash on the table, green leadership at the White House (pioneering advocate, Van Jones, became the "Special Advisor for Green Jobs" in March), and more legislation on the way, it's easy to imagine the rooftops of America sparkling with new solar panels, and Joe the Solar Guy carrying home a paycheck to his family for the first time.

But outside the Beltway, back in communities like Oakland or Newark where the green jobs movement got its start, are jobs materializing? If so, who is getting them?

Creating Jobs: Show Me the Money

It's still difficult to grasp the scale of the stimulus package President Obama ushered through Congress this winter. Formally known as the American Recovery and Reinvestment Act, the government's plan to rescue the economy includes more than $60 billion in clean energy investments. Over $500 million of that is allocated to green jobs training initiatives.

Private investment in clean energy companies is also at an all-time high. According to a report recently published by the Pew Charitable Trusts, investors directed $5.9 billion into American clean energy businesses in 2008, a 48 percent increase over 2007 investments. While private investments can seem paltry compared to the hundreds of billions of dollars being tossed around by the federal government, they may represent a more fundamental shift in the economy. For the first time, there's big money in going green.

But is all this money actually resulting in new jobs? According to the Pew report, it is. After studying job creation in all 50 states, the report concluded that the number of jobs in the clean energy economy isn't only growing, it's growing at over two times the rate of traditional jobs.

With billions of dollars beginning to flow into the clean energy economy, activists are now faced with the challenge of steering that cash to the people who need it most. 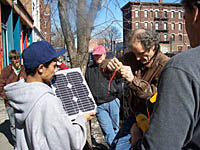 Julian Mocine-McQueen works as a field organizer at Green For All in Oakland, Calif. -- the organization Van Jones ran before he packed his bags for Washington. Back in January, Mocine-McQueen told the press that green jobs enabled him to "address the root causes of violence -- no jobs, no money."

I caught up with him last week, as ACES was being debated in Congress, to ask him whether the necessary money was finally available for green jobs training. "It feels like the rock is beginning to roll down hill," Mocine-McQueen said. "There are still some obstacles in the way, but we're gaining momentum."

On June 24, the Department of Labor released grant guidelines for the hundreds of millions of Recovery Act dollars committed to green job creation. In addition to the $500 million for green jobs training, the guidelines also stipulate $150 million for "Pathways Out of Poverty" grants.

The Department of Labor describes the prospective grant recipients as follows: "Populations eligible to receive services include unemployed individuals, high school dropouts, individuals with a criminal record and disadvantaged individuals within areas of high poverty." This is music to many green jobs activists' ears. Rather than simply re-training skilled workers in clean energy jobs, the "Pathway Out of Poverty" grants promise to bring entirely new groups of people, including many youth, into quality jobs for the first time.

"This money is beginning to filter down," explains Mocine-McQueen. "I'm hearing of new green jobs training programs popping up around the country all the time."

In California, the Oakland Green Jobs Corps, a pioneering organization that's now being replicated across the country, recently graduated its first class of 40 students. At the graduation ceremony, Oakland Mayor Ron Dellums said that the Jobs Corps:

...embraces a very simple, yet extraordinarily elegant idea: fight poverty and fight pollution simultaneously. Watching these young people graduate will be one more arrow in the quiver as we attempt to address these very important issues. Think about these young people who are graduating as the astronauts of the green revolution.

In Illinois, Greencorps Chicago enrolls ex-offenders in a nine-month training program to prepare them for jobs in the green economy. AmeriCorps, the national job-training program created under Clinton in the '90s, received $200 million from the stimulus package, and has launched new green jobs opportunities across the country. The Green for All website now lists example after example of training programs across the country. For the first time, youth in many locations can get the training they need to take part in the clean energy economy.

The challenge now, according to Mocine-McQueen, is to transition people from these training programs into good jobs that will provide a "pathway out of poverty." That's the ultimate promise of the green economy. "A lot of the programs out there are just summer employment or temporary jobs -- trail building, home energy audits, etc.," Mocine-McQueen explains. "We're still waiting for the market to catch up with the number of young people looking for long-term work."

Building Permanent Pathways Out of Poverty

Green pathways from poverty to success can be built from two directions: On one side, advocates and progressive politicians are creating the training programs and initial, short-term, employment opportunities necessary to start people down the path to full-time jobs. On the other side, private and public investment is stimulating the growth of new, clean energy businesses that will soon be looking for skilled labor.

Connecting the businesses that need workers with the people who need work is where students and local activists can play a big role.

"There's suddenly all this new money and all these new regulations," says Mocine-McQueen, who helps advocates attract clean energy businesses to their communities. "Many local governments literally don't know what they're doing when it comes to this stuff. There's a big opportunity for activists to go in there and tell them what to do."

Green for All has set up a special Web page on their site to help activists sort out the best ways to influence how their local government distributes stimulus package money. The page also provides information to help activists navigate the new regulations.

Phyllis Cuttino, the director of the U.S. Global Warming Campaign for the Pew Environment Group, suggests taking action at the state level as well. "Young people can play a big role in pushing for policies that make their state an attractive environment for new, clean energy businesses to set up shop," she says.

As scientists publish increasingly dire warnings about the perilous state of our climate, and millions of people struggle with the economic downturn, the time couldn't be more ripe for a green jobs revolution that simultaneously fights pollution and poverty. With training programs churning out graduates and new businesses starting up, activists now have the opportunity to steer stimulus dollars and local incentives to get the clean energy economy in motion.

Jamie Henn is the East Asia and communications coordinator for 350.org, the campaign to organize an International Day of Climate Action on October 24, 2009.