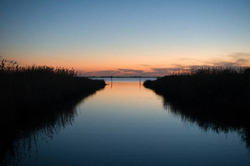 The communities of coastal Louisiana, once exceedingly rich in resources and culture, now lie on the verge of collapse. A unique and remarkable environment that took thousands of years to create thanks to the abundant sediment and fresh water of the mighty Mississippi River has been nearly decimated in less than a century. Unfortunately, this natural disaster will also exacerbate poverty in a region already deeply afflicted by economic loss. Without action now to help address coastal erosion, an environmental problem will become a socioeconomic one.

Historically, healthy barrier islands and vast systems of marsh and wetlands helped block coastal communities from the intensity of hurricanes and tropical storms. They served as natural first and second lines of defense-slowing wind speeds and absorbing storm surge. Under healthy conditions, wetlands act as a colossal sponge, absorbing roughly one foot of storm surge for every 2.7 miles of healthy marsh. In addition to placing themselves between these protecting forces and the sea, early settlers built their communities in areas that provided a third line of defense-ridges, which served as natural levees. 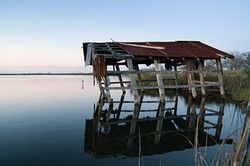 But over the last 75-80 years, human intervention has so weakened these natural defenses -- especially in the Barataria-Terrebonne Estuary which lays east of the Atchafalaya and west of the Mississippi Rivers -- that families are now forced to rely almost solely on manmade levees for their protection. What was once the last line of defense is now quickly becoming the only line of defense. Even worse, far too many residents, particularly low-income Louisianans, live outside of levee systems, where there is almost no protection left at all.

Unnatural land loss and erosion have not only assaulted the physical landscape in which coastal Louisianans live, it has battered the financial landscape as well. The expense of repairing or rebuilding their homes and replacing their belongings has put a huge financial strain on so many, but a storm no longer needs to make landfall to put a burden on families' pocketbooks. Due to the unnatural loss of natural protections, many communities can no longer offer shelter facilities close to home due to safety concerns. Families must often make difficult decisions about when and where to evacuate in order to ensure that they don't become trapped with no way out.

In addition, living along coastal Louisiana requires that many residents elevate their homes - in excess of ten feet in some areas -- a venture that can cost between $30,000-100,000. Insurance rarely covers the total cost after a storm, and even residents still able to afford insurance face higher deductibles with each passing storm. Home owners and flood insurance has quickly become unattainable for many residents, with policies that now cost between $5,000-8,000 a year, or more.

These costs only exacerbate financial insecurity in a region that has endured an economic downturn for some time now. Many people who traditionally have made their living along the coast as fishermen or workers in the oil field could at one time claim moderate incomes, but that is no longer the case. Even without the costly effects of hurricanes and other storms, a large percentage of people along the Louisiana coast are worse off than the previous generation. Many are just getting by, and like many Americans, are one pay check away from financial collapse. According to a Louisiana Department of Wildlife and Fisheries 2007 shrimp marketing survey, the average dockside price paid for shrimp in Louisiana has dropped from approximately $1.85 per pound in 1995 to approximately $0.98 per pound in 2006.

Despite these hardships, another costly environmental threat is on the horizon. Currently, there is just enough marsh left to provide food and nursery beds for shrimp, crab and other fisheries. However, if land loss is allowed to continue, the fishing industry is headed for collapse. And it is likely that it will not happen gradually. The collapse of the ecosystem will add stress to families already under great strain and who live in the most vulnerable areas.

Coastal Louisiana is at a critical juncture and in desperate need of comprehensive restoration and protection. This problem has been well documented for decades by both state and federal agencies. However, action and full commitment to restore and protect this area has moved slowly and the money needed to holistically implement restoration and protection projects that can reverse the tide have been minimal in light of what is required. 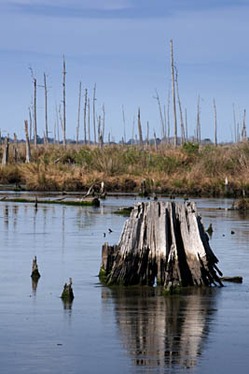 Some positive actions have occurred since Hurricanes Katrina and Rita. Louisiana's Comprehensive Master Plan for a Sustainable Coast was approved in 2006 and is administrated through the newly created Coastal Protection and Restoration Authority (CPRA). Federal funds from the Coastal Wetlands Planning, Protection and Restoration Act (CWPPRA) of 1990, Coastal Impact Assistance Program (CIAP), oil and gas revenue sharing or state surplus funding that are dedicated to coastal restoration and protection are available through a competitive process under the CPRA.

Yet the CPRA is underfunded and in need of greater federal commitment. Funding available one year may be gone the next. In addition, because this is a competitive process due to resource constraints, coastal restoration and protection projects are often not well coordinated.

One of the biggest untapped opportunities would be for Congress to redirect the Army Corps of Engineers to help steward land management in the region.

The first thing Congress must do is guide the Corps to perform coastal restoration work in the name of hurricane protection. When policymakers determine the Corps' budget for Louisiana, they tend to focus on the immediate primary Corps operations, which include: navigation, flood control and restoration.

While all the pieces are there, policymakers frequently overlook the interconnectedness of these goals. The truth, however, is that island enhancement and marsh restoration will reduce storm surge and storm intensity, thereby limiting the cost of flooding and devastation.

If policymakers took a more holistic approach to restoration, they would recognize that protecting the coast would reduce the constant need for federal dollars to rebuild communities. Redirecting the Army Corps of Engineers to undertake restoration work as a means of protecting coastal Louisiana would accomplish this.

The second thing Congress can do is allow the Corps to use the sediment that they dredge annually from the Mississippi River and its tributaries to be used in a beneficial way. Currently, the Corps dredges the Mississippi to maintain river depths for navigation. The Corps is directed to dispose of the sediment they dredge in the most cost-beneficial manner. Unfortunately, this usually means not returning the material to the Louisiana estuary. Instead, the Corps dumps the sediment off of the continental shelf.

If Congress were to redirect the Corps to put sediment into the estuary, it would be an easy, effective way to build marsh and land. New technology will help ensure dredged sediment can be used to stabilize the environment and help to rebuild the environment so that it can once again protect the area.

Finally, all related agencies -- the CPRA, the Corps and other state and federal groups -- need to work with nongovernmental organizations to educate the public not only on the effects of coastal land loss and erosion, but also why rebuilding the coast will help sustain the environment and protect people from future storms. If the public at large is not apart of the overall process of restoration and protection, no governmental efforts will succeed.

If coastal Louisiana is going to survive, then the multiple lines of defense -- barrier island enhancement, marsh restoration and hurricane protection systems -- must be implemented. Allowing the natural environment to falter will only exacerbate the severe deprivation already pervasive along coastal Louisiana. Congress can take the lead in protecting this vital part of our national environment and reduce Gulf Coast poverty at the same time.

Courtney Howell is director and Diane Huhn is volunteer coordinator for Bayou Grace Community Services, which implements outreach, services, and advocacy that addresses the immediate needs of the five bayou communities of Terrebonne Parish, giving residents opportunity and renewed strength to advocate and work towards the environmental health of their community. This commentary originally appeared in a series presented by the Equity and Inclusion Campaign.