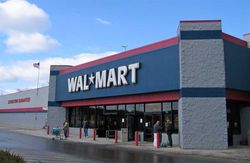 As the health-care debate continues to heat up the political landscape, the latest PR blitz this week from business groups left the nation's retail industry divided -- with Wal-Mart, the world's largest retailer, on one side and the National Retail Federation, the world's largest retail trade group, on the other.{C}Two weeks ago Wal-Mart shocked the industry when it backed the employer mandate, a health-care reform plan supported by the Obama administration that would require employers to sponsor employee health insurance coverage or pay an annual fee.

Wal-Mart's letter to President Barack Obama, sent jointly with the Service Employees International Union and the Washington-D.C.-based think tank Center for American Progress, not only backed the mandate for companies to help provide health insurance to employees, but also argued that the current health-care system, which leaves millions uninsured, is economically inefficient. Wal-Mart's president Michael Duke signed the letter, as did SEIU president Andrew Stern and CAP's president, John Podesta, a former chief of staff to President Bill Clinton who served in the Obama administration's transition team.


As the Congress considers legislation reforming our health care system, many difficult choices lie ahead. During the debate, we must keep our eyes trained on one clear imperative: reforming health care is necessary not just to improve the health of all Americans, but also to remove the burden that is crushing America's businesses and hampering our competitiveness in the global economy.
...
We are for shared responsibility. Not every business can make the same contribution, but everyone must make some contribution. We are for an employer mandate which is fair and broad in its coverage, but any alternative to an employer mandate should not create barriers to hiring entry level employees.
...
With smart, targeted policies, we can create a financially-viable health care system that enables workers to change jobs without losing their care, and allows businesses to become more nimble.

Wal-Mart's decision to break ranks with corporate lobbies fiercely opposed to health-care reform and to team up with a major union and a liberal think tank left corporate and business lobbies struggling for a response last week. Monday the National Retail Federation sent a letter to its 2,500 members attacking Wal-Mart's stance. Wal-Mart itself isn't a member of the NRF, but the Washington-D.C.-based trade association does include 1.6 million businesses, representing a mix of small independent stores and big chains.

The letter from the NRF to its members this week said:

Seeing the company in lock-step with the unions on this issue was troubling to say the least. Although the move may provide a short-term public relations boost to Wal-Mart, it could have long-lasting, devastating consequences to retailers throughout the country.

The letter goes on to argue that if employers were required to spend money on their employees' health care, they would be forced to raise prices or reduce payrolls, and that it would be "catastrophic" for the industry. The NRF has been one of the leading industry groups -- alongside the U.S. Chamber of Commerce -- opposed to Democratic health-care proposals. The group also sent a letter in early June to senators drafting the health-care legislation stating that it would advise its members to oppose lawmakers who vote for an employer mandate, reports Bloomberg.

Some observers say it is a sign of just how serious the health-care crisis is getting in the United States when even the biggest retailer in the country calls for employers to contribute to their employees' health-care costs. Other observers say that Wal-Mart is simply acting in its own best interest. Because Wal-Mart already offers health insurance to its employees, it's now at a competitive disadvantage in comparison to its rivals. Ensuring that all retailers provide health benefits would put companies all in the same boat.

All in all, labor and Wal-Mart make for strange bedfellows. SEIU, the largest union in the United States has been a long critic of Wal-Mart's labor rights violations. As Facing South has reported, the Bentonville, Ark.-based corporation also has long been a major foe of labor rights initiatives, known for busting unions trying to form at its stores, mobilizing store managers to vote against Democrats, and hiring firms to lobby against the Employee Free Choice Act (EFCA), the pro-worker bill that has been one of the top legislative priorities for unions this year.

Wal-Mart is the world's largest retailer, the world's largest company, and the United State's biggest private-sector employer, with 1.4 million employees. It has been routinely singled out by labor and worker advocates for its unfair treatment of workers. Groups like Human Rights Watch, American Rights at Work, Wal-Mart Watch and the AFL-CIO have all issued several scathing reports chronicling Wal-Mart's history of labor rights violations. Wal-Mart has also been a leader in corporate spending in opposition to the EFCA, even wielding its political muscle in its home state of Arkansas to heavily lobby the state's senators to defect from supporting the EFCA.

It should come as no surprise that some labor groups are questioning Wal-Mart's commitment to health reform due to this checkered history with issues like labor rights. Critics have argued that Wal-Mart's own health-care plan, which it provides to its employees, is inadequate and lacking in critical benefits.

In June, the United Food and Commercial Workers Union, which has unsuccessfully tried to organize Wal-Mart workers for several years, sent a letter to a letter to Obama raising questions about the company's position. In the letter, UFCW's president Joseph Hansen said:

As a company that has had a significant role in fueling this nation's health care crisis, I have serious questions about Wal-Mart's commitment to playing a constructive role in fashioning reform that, in fact, provides quality affordable care for all. 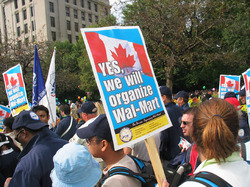 The UFCW went on to note that Wal-Mart's current employer contribution falls short of providing at least 75 percent of the cost of family coverage, an industry standard. The UFCW also detailed that the company does not provide health-care coverage for part-time workers and their dependents, a large issue considering that more than 60 percent of retail jobs are part-time.

Whether or not Wal-Mart's slide to the side of the Obama administration-supported employer mandate plan will make a difference in the health-care reform debate has yet to be determined. Some observers say it is a powerful move that could shift the landscape, while others say that only time will tell.

Time for a new debate about business success

TennCare Vs. The Wal-Mart Low Road