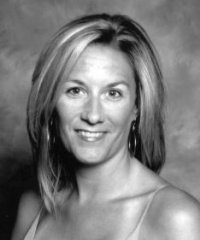 The Republican Party has been trying to revamp its image as more inclusive of diversity -- but the newly elected leader of the party's youth branch may set that effort back.

At their annual convention in Indianapolis last week, the Young Republican National Federation elected as their new chair Audra Shay (in photo) of New Orleans, the group's former vice chair at large. Shay, a 38-year-old Arkansas native, defeated Rachel Hoff, the group's director of media relations, by a vote of 470-415, according to The Daily Beast.

The online news site has been covering the story in depth, revealing racially offensive comments made by Shay on Facebook:

Specifically, a thread where one of her friends posts that "Obama Bin Lauden [sic] is the new terrorist... Muslim is on there side [sic]... need to take this country back from all of these mad coons... and illegals," and Shay responds eight minutes later with: "You tell em Eric! lol."

Click here to see a screenshot of the thread in question courtesy of the Arkansas Times blog.

When two Facebook friends including the head of the African-American Young Republican Chapter complained about the racist remarks, Shay reportedly responded by unfriending them. She later released a statement disavowing her support for the remarks and pointing out that under her chairmanship the Louisiana Young Republicans raised $90,000 for a minority outreach media campaign.

But the Daily Beast also reported that in October 2008, following news that Sarah Palin was being hung in effigy outside a home as an offensive Halloween decoration, Shays posted to Facebook, "What no Obama in a noose? Come on now, its just freedome [sic] of speech, no one in Atlanta would take that wrong! Lol."

She later added, "Apparently I could not spell last night. I am wondering if the guys with the Palin noose would care if we had a bunch of homosexuals in a noose."

Tax Week: Who's coming to the tea parties?

Who dat in the New Orleans mayor's office?