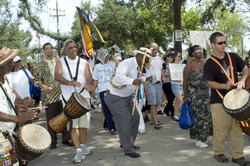 August 29th marks the fourth anniversary of Hurricane Katrina's landfall and the levee failures in New Orleans. Across the Gulf Coast region, thousands of people will be gathering together for vigils, rallies, marches, cultural events and commemorations. Gulf Coast advocates are struggling to keep the region's recovery on the national radar, and to explain that many communities are still struggling to recover.

As the Katrina Information Network, a collaboration of groups in the Gulf and across the country, explained in a recent statement:

Although New Orleans Mayor Ray Nagin has said that the city's official commemoration should focus on the "city's progress," many of the commemorative events hope to shine a spotlight on ways recovery has been stalled

"The anniversary has become an important milestone for all of us to look back and reflect on what really happened in our communities and why," says New Orleans activist Corlita Mahr.  "With more than 100,000 families still trying to get back and thousands here in the region homeless and jobless, this is no time for patting ourselves on the back."

As resources dwindle and many of the communities hardest hit have yet to receive significant aid or public investment, residents are still hopeful that change will come to the Gulf.  "President Obama spent a significant part of his campaign talking about how his Administration would make recovery in the region a priority," says Jaribu Hill of the Mississippi Workers Center for Human Rights. "We are doing our part - rebuilding, working together with coalitions of workers and their families, making a way out of no way as our grandparents would say.  Now, we need the Administration to do its part."

Here is a list of several events commemorating the 4th anniversary this week, with listings from the Katrina Information Network:

DVD Release of Trouble The Water!
Order the DVD today: http://www.troublethewaterfilm.com/buythedvd
Description: TROUBLE THE WATER takes you inside Hurricane Katrina in a way never before seen on screen. It's a redemptive tale of two self-described street hustlers who become heroes-two unforgettable people who survive the storm and then seize a chance for a new beginning.

Four Years and Counting on the Road to Housing Justice
Event Sponsors: The Porch 7th Ward Cultural Organization, NOLA Tenants Rights Union, Survivor's Village, JoLu Productions, STAND for Dignity, and Greater New Orleans Fair Housing Action Center, with funding from the New Orleans Musicians Assistance Foundation and assistance from PATOIS: The New Orleans International Human Rights Film Festival.
Description: Four years after Katrina many New Orleanians still do not have access to affordable housing and equal housing opportunity. Come out and join the conversation about the struggle for housing justice on Friday from 7-9 p.m. at the 7th Ward Neighborhood Center - 1941 Pauger Street, New Orleans. The event will feature short film screenings, an open mic, music by the Big 7 Brass Band, and refreshments. Learn more about grassroots groups and non-profit organizations that are organizing around housing justice and affordable housing. Questions? Call (504) 596-2100 or (504) 401-1836 for more information.

4th Annual Katrina Walk
Event Sponsor:  Catholic Churches of East Biloxi
Description: The Catholic Churches of East Biloxi will conduct the fourth annual Katrina walk in Biloxi, Mississippi. Transportation will be provided from St. Michael's to Our Mother of Sorrows Church, 803 Division St., at 4 p.m. The walk will begin at 5 p.m. from Our Mother of Sorrows with prayer stops at Blessed Francis Seelos Church, 360 Lameuse St., Church of Vietnamese Martyrs, 163 Oak St., and ending at 8 p.m. at St. Michael Church on the beach, 177 East First St.

The Ringing of Bells
Event Sponsor: City of New Orleans
Description: New Orleans Mayor Ray Nagin plans to mark the fourth anniversary of Hurricane Katrina by celebrating the city's progress since the storm and catastrophic levee breaches on Aug. 29, 2005.

Katrina Memorial Observance
Event Sponsor: City of Biloxi
Description: The city will hold a Katrina memorial observance on Saturday, Aug. 29 at 8 a.m. on the Biloxi Town Green.  The 30-minute ceremony, which will involve several clergy members, will be capped by the unveiling of Marlin's marlin, a Marlin Miller sculpture created from a standing dead oak on the north side of the Town Green, near the Katrina memorial.

Community Louisiana, My Heart, My Home Rebuild-a-thon with the Louisiana Disaster Recovery Foundation, and commemoration to mark Hurricane Katrina's landfall
Event Sponsor: Ashe Cultural and Arts Center
Description: The event is billed as "a day of service to commemorate the resilience of Louisiana residents in the wake of Hurricanes Katrina and Rita." Over 15 members of the Team Ashé will show up at Congo Square in New Orleans at 7:30 a.m. on Saturday, August 29, 2009, the fourth anniversary of Hurricane Katrina to either assist with a garden project in the Gentilly neighborhood or in the Lower Ninth Ward; or a building project for a Central City church. The day includes a rally prior to participants being bused to service locations, and concludes with live entertainment.

Celebration of Positive Contributions and Unsung Heroes of Hurricane Katrina
Event Sponsor: The Children's Defense Fund and the Katrina Citizen's Leadership Corp
Description: Located at the Center for Hope in the The Vue Good Hope Baptist Church. The address is 3015 Macgregor WayHouston, TX 77061. For more information email kclchouston1@gmail.com or call 832-623-6521.

Commemoration Ceremony
Event Sponsor: St. Bernard Parish
Location:  Katrina Monument in Shell Beach at the Mississippi River Gulf Outlet
Description: At 8:30 p.m., St. Bernard  Parish Government will hold a ceremony to commemorate the storm's aftermath as well as commemorate the storm's aftermath as well as celebrating the ongoing progress and embracing the citizens' zeal about day-to-day steps in the parish's recovery. This year, the public is invited to gather again in front of the granite monument that bears the names of 163 St. Bernard Parish victims of Hurricane Katrina who died as a result of the storm, whether it was during the actual event or because of the evacuation.

We Are Still Here Gallery
Event Sponsor: St. Bernard Parish
Location: Torres Park
Time: 6:00-8:00 p.m.
Description: This year's Community Celebration will feature the music of Harvey Jesus from 6 to 8 p.m. in the Community Playground Amphitheater in Torres Park behind the Government Complex. Also, St. Bernard Parish President Taffaro is inviting all civic groups, government agencies and citizens to participate in a "We're Still Here Gallery," a series of tables to showcase items, icons and memorabilia that show what is good that has endured in our parish.
Contact: Contact Karen Turni Bazile at 504-278-4280 or kbazile@sbpg.net This e-mail address is being protected from spambots, you need JavaScript enabled to view it to reserve a table.

Outreach Tulane
Contact: Outreach Tulane- outreach.tulane.edu
Description: Students will participate in 18 service projects throughout the city. There will be a march to the 9th Ward followed by a health fair in the 7th Ward.

Hands Around the Dome Ceremony
Event Sponsor: The African American Leadership Project
Description: The African American Leadership Project will resume its Hands Around the Dome Ceremony on Saturday at the New Orleans City Council chambers from 1:00 p.m. to 3:30 p.m. This year's program will consist of a ceremony and presentation of the issues from 1:00 p.m. to 2:15 p.m., followed by an open dialogue from 2:15 to 3:30 p.m. on "Building a Community-based Agenda for Next Year's Elections and Beyond."

4 Years After Katrina: The legacy of Katrina, by the numbers