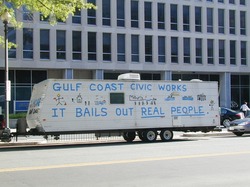 This Friday supporters of the Gulf Coast Civic Works Act (HR 2269) will rally on the fourth anniversary of Hurricane Katrina in front of House Speaker Nancy Pelosi's office to call on her to support this critical piece of legislation.

As Facing South has reported, Gulf Coast advocates have been hard at work shoring up Congressional support for a Gulf Coast-centric civic works project. HR 2269 is a Gulf region recovery package that would create green jobs along the Gulf Coast for victims of past storms.

Coming almost four years after Hurricanes Katrina and Rita, the legislation was introduced in early May, and is co-sponsored by a bipartisan group of 30 Congress members and supported by more than 240 diverse regional and national student, faith, environmental and community organizations.

The legislation, inspired by New Deal public works projects, would create some 100,000 environmentally-sustainable and prevailing-wage jobs and training opportunities on the Gulf Coast that would allow residents and displaced workers to rebuild critical infrastructure in their communities and restore natural coastal flood protection.

On Friday, advocates will deliver more than 10,000 signed petitions in support of HR 2269, and an open letter to Pelosi. For more information about the rally, visit here. For more background on the GCCW, click here [pdf]. Read below for the full text of the open letter.

"From housing to health care to education, the region remains in a state of crisis."

An Open Letter to Speaker Pelosi

On August 29, 2005, Hurricane Katrina took the lives of more than 1,836 people, displaced more than one million residents, and damaged more than 200,000 Gulf Coast homes in a 90,000 square mile area. The damage caused by the flooding, storm surge, and high winds destroyed schools, hospitals, roads, community centers, bridges, parks, and forestlands. In the end, the Gulf Coast suffered more than $100 billion in damage, making Katrina the costliest and most deadly hurricane in the history of the United States.

Four years after Hurricane Katrina, the Gulf Coast remains in a state of crisis. Today, the public infrastructure is still badly damaged; thousands of residents live in toxic government issued trailers; affordable housing projects have ground to a halt with the crash of financial markets; coastal erosion threatens the very existence of communities and destroying vital natural flood protection; tens of thousands of displaced survivors are unable to return home; and many more unable to access proper training and living wage work to lift their families out of poverty.

Speaker Pelosi, you have promised to do everything possible to rebuild the Gulf Coast. We would like to take you at your word. Your website lists the Congressional actions taken in the Gulf Coast, but the reality is that the Gulf Coast is still suffering four years after Katrina, and the injustice is happening on your watch.

Today, there is a regional and national movement to respond to the crisis and rebuild the Gulf Coast through the Gulf Coast Civic Works Act (HR 2269). The Gulf Coast Civic Works Act is based on a simple idea: Create 100,000 prevailing-wage jobs for Gulf Coast residents and displaced survivors to rebuild the public infrastructure that was damaged in Hurricanes Katrina and Rita. HR 2269 is a resident-led effort that creates green jobs and training opportunities for local and displaced workers to rebuild public infrastructure and restore the environment.

Currently, the Gulf Coast Civic Works Act has 30 bi-partisan co-sponsors, along with 240 community, faith, environment, labor and student-based organizations. HR 2269 also has the support of the New Orleans City Council, the Bayou Parishes of Lafourche and Terrebonne, the Louisiana Republican Party, and the California and Missouri Democratic Parties.

Last year, on your web site, you stated that you would do everything possible to support Gulf Coast recovery. We ask you today, on the 4th anniversary of Hurricane Katrina, to take two small, but powerful actions:

We realize that you only co-sponsor a few bills a year, but this bill is of such importance, that your signing on to HR 2269 will be a powerful symbol to other House members and to the nation about the importance of rebuilding the Gulf Coast. We ask that you respond to our request by September 15, 2009.

Advocates take the Gulf Coast cause to the Hill

Taking Action for the Gulf

The state of New Orleans on 2-year anniversary of Katrina