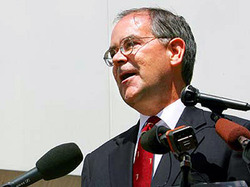 And to make the case, Rep. Cooper says we should look to the model of our country's rural electric co-operatives. As he told MSNBC yesterday:

"A co-op is really used over three-quarters of the land area of America so we buy our electricity that way," said Cooper. "It's a creature of the New Deal. It's worked really pretty well over all the country for 70 or 80 years. It's owned by the customers; it is not owned by the government. It works. It works real well."

But Rep. Cooper hasn't always been so enthusiastic about the rural electric co-op model. In fact, just last year, Cooper published an article in the Harvard Journal on Legislation [pdf] that blasted the rural electric co-ops, which he argued had "turned away from their historic role" as pro-consumer organizations and had "taken on deeply troubling anti-consumer behaviors."

* Many co-ops have turned away from their public interest mission, "acting distressingly similar to for-profit businesses," in some cases becoming "wealthy power companies." (p. 354).

* One result of the for-profit mentality is that the co-ops, Cooper argues, have cheated consumers out of money: "$3 billion to $9 billion" in capital credits that should be refunded to consumers (p. 375). Tennessee Valley Authority co-ops "have refused to refund any member equity" (p. 340).

* The electric co-ops have also "tried to hide information from their members ... Free of member scrutiny, co-op managers have often failed to serve their members' interests." (p. 339)

* Many co-ops are poorly run: "Co-op board members sometimes display astonishing ignorance of co-op business," argues Cooper, "but are insulated from liability for their decisions due to the co-op's not-for-profit status" (p. 362).

* Electric co-ops have created their own powerful political operations who "blame government for new regulations" (p. 355). They also find themselves at odds with the public interest mission of other parts of government, such as lobbying against clean energy legislation.

Rep. Cooper proposes fixes for some of these problems in his article, but not for others. Many seem to mirror problems our country has had with health co-operatives in the past, which have been subject to similar political and economic pressures.