In the first photograph in Still Here: Stories After Katrina, Earl Slaughter stands at the edge of a pond. There is an arc of an open area, but the setting is not pastoral. The grassy, tree-lined embankments slope down to the water from the backyards of nearby houses in Denton, Tex.
The town, 35 miles north of Dallas-Ft. Worth and more than 500 miles from New Orleans, became an initial sanctuary for some survivors of Hurricane Katrina in 2005. Slaughter's back is to the camera and we view him taking in the scene's serenity. Within an instant of our first glance, we know that photographer Joseph Rodriguez is demanding that we contrast the pond's still waters with the memory of Katrina's unrestrained fury that must remain fixed in Slaughter's mind's eye.
Graphically, "Still Here" is an exquisite book and another welcomed testament to the power of black and white photography. It is not a large volume, but the industrial-like design and heft of the cover amplify the permanence and solidity of the title. But, as time inevitably unfurls, there will be fewer and fewer eyewitnesses to what was a great American tragedy. 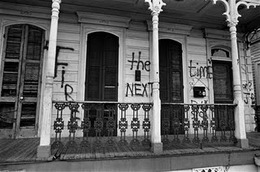 Though there are no pretensions about attempting to capture a dramatic moment of rescue or survival, "Still Here," a title taken from a Langston Hughes poem, is as much about those themes as works in any medium or images from any news source. Rodriguez has assembled a body of photographs resonant with emotions, from anger and despair, to fleeting joy and distilled compassion. The photographs are enhanced by commentaries and captions by Patrice Pascual. Her writing functions in a complementary role, never overwhelming the reader with either volume or analysis, but enlarging the canvas with details that make Rodriguez's photographs all the more poignant.
For example, we see Chaperell Washington with a look of such pain and sorrow that we know whatever has transpired must have deeply pierced her soul. The death of a loved one? No, she "returned to the Ninth Ward a year after Katrina hit, this time without her children. The family was evicted from an Atlanta apartment after they ran out of FEMA money. She had to send her children to live with their father, an evacuee trying to make a new life in Houston."
While there is certainly more Pascual could have written about Washington's circumstances, we learn enough to know exactly why her face, the mirror of a mother's separation from her children, is consumed by such anguish. So, herein is one of the layers of the photographic challenge, to be able to convey the universal and the specific within the same image.
Rodriguez treads this path well and the images can stand alone. But the book's objective as an eyewitness to the humanity of Katrina's survivors all but demands the explanation the text provides and, on occasion, Rodriguez himself weighs in with written commentary. Rodriguez has laid out subplots of his subjects' transition from New Orleans to Denton. We meet Julia Stewart, who, at age 70, swam to safety through flood waters with her younger brothers. She evacuated to Denton, but understandably was anxious about the home she owned in New Orleans. "When Julia died in 2007, the family was still in rental housing." There are others who likewise appear who are now dead; survivors of Katrina but not its wake. 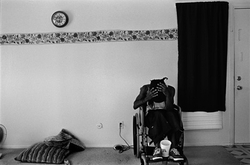 And, then there is Charles Robinson. Sitting in a wheelchair, he appears in three separate photographs. We are told he was gunshot-paralyzed before Katrina. He is first seen with his mother and brother. Later, in a second photograph, he is only with his brother, who we find out was murdered before the book's publication. In the third, he is alone. But, take note. In no picture does Robinson look directly at the camera. In his final photograph, we see him holding his hands over his bowed head as if to escape the enormous weight of loss and isolation.
"Still Here" is provocative: an indelible portrait of human beings summoning courage, resilience, and hope, when, in the face of despair, they could be forgiven for less.
(Images by Joseph Rodriguez)
Copyright © New America Media

Review: Where's the rebellion in '12 Years a Slave'?

Five Years Later: Washington has yet to address key failures exposed by Katrina

Book Fridays: the Real South, the War on Poverty, and stories from New Orleans