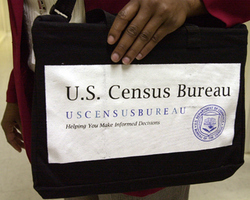 The Leadership Conference on Civil Rights Education Fund released a report Monday assessing the impact of the 2005 hurricanes on the Gulf Coast and the challenges the area might face during the upcoming 2010 Census. According to the report, "the lingering effects of 2005's devastation will make the 2010 count both the most difficult and important in the region's history."

Gulf Coast advocates have been urging Congress to ensure accuracy in next year's Census count. As Facing South has reported, the Census will play an important role in determining the amount of dollars flowing to the Gulf Coast region over the next decade, as well as political representation. But the mass displacement and depopulation in the region resulting from the 2005 hurricanes has presented a unique challenge.

In July, the Louisiana-based nonprofit Moving Forward Gulf Coast and other community groups sent a letter to U.S. Rep. William Lacy Clay, chairman of a House subcommittee that oversees the Census, outlining why an accurate count is critical to the Gulf Coast's post-Katrina recovery. An undercount by even several thousand people could lead to the loss of millions of dollars in aid to parishes that are badly in need, advocates say.

As the new LCCREF report outlines, the "demographic and socio-economic characteristics of the Gulf Coast region made it vulnerable to an undercount even before the Katrina catastrophe and its aftermath." The region is home to traditionally "hard-to-count" and traditionally undercounted populations groups, including racial and ethnic minorities, people with low incomes and people with limited English-language proficiency.

According to the report:

For the 2010 Census, the region's already high rate of people living in officially designated "hard to count" areas has been exacerbated by a set of circumstances facing communities affected by Katrina: massive housing destruction and depopulation; uneven and incomplete recovery; difficult-to-classify addresses in areas of lingering blight; rapidly changing conditions generated by ongoing rebuilding; and distrust of government enhanced by the failures of preparedness, response and recovery.

A review of the most recent available research on demographic and housing data in the Gulf Coast region confirms the particular nature of the challenges to an accurate count in the areas still recovering from Katrina:

Earlier this summer New Orleans Mayor Ray Nagin stirred up controversy when he encouraged residents displaced by Hurricane Katrina to claim their New Orleans addresses on their 2010 Census forms if they intend to return to their pre-storm homes but have not yet done so.

Officials from the Census Bureau discouraged these actions. Census officials said that federal law dictates people be counted in the homes they reside in as of April 1, and as a result they could not make an exception for displaced residents. But the Census Bureau has announced several additional steps that it would be taking in the Gulf Coast region in response to growing community concerns, including a large-scale communications campaign. Census takers will also hand deliver an estimated 300,000 questionnaires to homes in 11 south Louisiana parishes affected by Katrina and Rita in 2005 -- including all of New Orleans and parts of Mississippi -- and make hand deliveries in parts of Galveston Island, Texas, which was hit by Hurricane Ike last summer.

The LCCREF report acknowledges the additional efforts the Census Bureau is undertaking. The group goes on to outline several additional steps that lawmakers could take, calling on:
The report also asks Census officials to appoint a high-level Gulf Coast Census Coordinator to oversee final preparations and Census operations in Gulf Coast communities.

One Year After Katrina

The national impact of Katrina