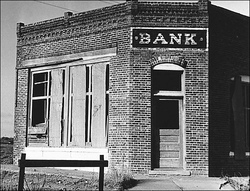 Sixteen bank failures -- one-quarter of all bank failures in the United States so far this year -- have been reported in the state of Georgia, giving the state the dubious title as "the bank failure capital of the world."
ProPublica put together this chart listing bank failures by state. And while Georgia leads the nation in bank failures, Florida has had four bank closings this year alone, coming in third just after California. Although North Carolina has had only two bank closings, more than a quarter of its 88 state-chartered banks are on N.C. regulators' list of troubled institutions in that state.
Nationwide, according to FDIC, under the current financial crisis, the number of troubled U.S. banks stands at about 305.
Georgia is home to just 4 percent of all U.S. banks, but about 30 banks in the state are at risk of failing, reported the Wall Street Journal. And while financial analysts say bad real estate loans are the main cause of the failures in Georgia -- Atlanta, as one of the fastest growing metropolitan areas in the country, saw a massive real estate expansion in the past decade -- others point out Georgia's unique banking history.
As the Associated Press reported:

Experts predict more could be closed in Georgia in the future. But what propelled Georgia to No. 1 in bank failures is complicated.

Experts say it's a combination of an antiquated state law that favored a plethora of smaller community banks over multi-branch giants; a population explosion in metro Atlanta that fueled massive suburban real estate development and a crush of new banks formed to cash in on the Atlanta boom shortly before the market tanked

In just 13 months, three banks based within a few miles of each other went bust. Three more in other Atlanta suburbs were seized by regulators in 2008, as the region was haunted by overabundant home building, years of risky lending and one of the most relaxed regulatory environments in the U.S. for starting new banks, according to some experts. ...

The sprawling Atlanta area was home to five of the 25 banks that failed last year across the country. As many as 20 of the 122 banks still headquartered in or near Atlanta could go under before the credit crisis and recession are over, local bankers and analysts predict.

The loss of small-town and local banks throughout Georgia has left many rural and suburban communities reeling.