Skip to main content
Defend democracy in the South.
Donate Today
By Guest BloggerAugust 26, 2009
On the 4th anniversary of Katrina, New Orleans is still far from recovery. 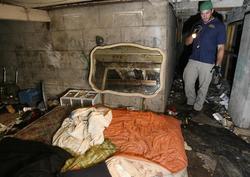 Crawling through a hole in a fence and walking through an open doorway, Shamus Rohn and Mike Miller lead the way into an abandoned Midcity hospital. They are outreach workers for the New Orleans organization UNITY for the Homeless, and they do this all day long: searching empty houses and buildings for people, so they can offer services and support. "We joke about having turned criminal trespass into a fulltime job," says Rohn.

Up a darkened stairway and through the detritus of a thoroughly scavenged building, Rohn and Miller enter a sun-drenched room. Inside is Michael Palmer, a 57-year-old white former construction worker and merchant seaman who has made a home here. Palmer -- his friends call him Mickey -- is in some ways lucky. He found a room with a door that locks. He salvaged some furniture from other parts of the hospital, so he has a bed, a couch, and a rug. Best of all, he has a fourth-floor room with a balcony. "Of all the homeless," he says, "I probably have the best view."

Mickey has lived here for six months. He's been homeless since shortly after Katrina, and this is by far the best place he's stayed in that time. "I've lived on the street," he says. "I've slept in a cardboard box." He is a proud man, thin and muscled with a fresh shave, clean clothes and a trim mustache. He credits a nearby church, which lets him shave and shower.

But Palmer would like to be able to pay rent again. "My apartment was around $450. I could afford $450. I can't afford $700 or $800 and that's what the places have gone up to." Keeping himself together, well-dressed and fresh, Mickey is trying to go back to the life he had. "I have never lived on the dole of the state," he says proudly. "I've never been on welfare, never collected food stamps." Palmer rented an apartment before Katrina. He did repairs and construction. "I had my own business," he says. "I had a pickup truck with all my tools, and all that went under water."

Palmer is one of thousands of homeless people living in New Orleans' storm damaged and abandoned homes and buildings. Four years after Katrina, recovery and rebuilding has come slow to this city, and there are many boarded-up homes to choose from. The Greater New Orleans Community Data Center counts 65,888 abandoned residential addresses in New Orleans, and this number doesn't include any of the many non-residential buildings, like the hospital Mickey stays in. Overall, about a third of the addresses in the city are vacant or abandoned, the highest rate in the nation. UNITY for the Homeless is the only organization surveying these spaces, and Miller and Rohn are the only fulltime staff on the project. They have surveyed 1,330 buildings -- a small fraction of the total number of empty structures. Of those, 564 were unsecured. Nearly 40% of them showed signs of use, including a total of 270 bedrolls or mattresses.

Using conservative estimates, UNITY estimates at least 6,000 squatters, and a total of about 11,000 homeless individuals in the city.

UNITY workers have also found that not all people living in New Orleans' abandoned homes are squatters. In the last three months alone, they have found nine homeowners living in their own toxic, flood-damaged, often completely unrepaired homes. These are people living in buildings -- identified as abandoned and not fit for human habitation -- that they (or extended family members) actually own, but cannot afford to repair.

The abandoned building dwellers they've found are generally older than the overall homeless population, with high rates of disability and illness. The average age of folks they have found is 45, and the oldest was 90. Over 70% report or show signs of psychiatric disorders, and 42% show signs of disabling medical illnesses and problems.  Disabling means "people that are facing death if not treated properly," clarifies Rohn. "We're not talking about something like high blood pressure."

"This leg here bent backwards and the muscle came up," says Naomi Burkhalter, an elderly Black woman in a wheelchair, sitting outside of the abandoned house she lives in and gesturing to her badly twisted leg. She was injured during Katrina, and can't walk. She stays in a flood-damaged house in New Orleans' Gert Town neighborhood, with no electricity or running water. She says the owner -- who cannot afford to repair the home -- knows she lives there, along with two other women. When they need water, they fill bottles up from neighbors. When she needs to get in and out of her house, she crawls, very slowly dragging herself up and down the steps with her hands, leaving her wheelchair outside and hoping no one takes it. Miss Naomi worked at a shrimp company and rented an apartment before Katrina. Now, between her injury and higher rents, she can no longer afford her former home. "My rent was $350," she explains. "But when I came back, my rent was up to $1,200." Burkhalter has been homeless since then.

UNITY has received funding from the federal government for 752 housing vouchers specifically to help house the city's homeless population. They have put people on a list, with those in the most danger of dying if they don't get help on the top of the list. However, the vouchers still have not arrived, and at least 16 people from the list have already died while waiting. "The stress and trauma that these people have endured cannot be overstated," says Martha Kegel, executive director of UNITY. "The neighborhood infrastructure that so many people depended on is gone."

This problem was exacerbated by the demolition of thousands of units of public housing, an act which not only took away the community that many people found brought them comfort and safety, but has also made affordable rentals for poor New Orleanians even harder to find. Section 8 subsidized housing has been offered as a solution for those displaced from public housing and other poor renters, but a new study from Greater New Orleans Fair Housing Action Center (GNOFHAC) shows that discrimination keeps many people from finding quality housing through the program. According to the report, 82% of landlords in the city either refused to accept Section 8 vouchers, or added insurmountable requirements.

The study found that both discrimination on the part of landlords (99% of Section 8 voucher holders in Orleans parish are Black) and mismanagement on the part of the housing agency were barriers. One prospective landlord told a tester for GNOFHAC that he wouldn't rent to Section 8 holders, "until Black ministers...start teaching morals and ethics to their own, so they don't have litters of pups like animals, and they're not milking the system."

The mismanagement from the Housing Authority of New Orleans (HANO) was also a big problem for prospective landlords. "I faxed HANO the needed information 12 times for the rent I was never paid," said one landlord.  Another housing provider said, "I called every day for a month and never got a call back.

Last month, more than a hundred members of STAND for Dignity, a grassroots membership project of the New Orleans Workers Center for Racial Justice, protested outside of the offices of HANO, decrying their lack of action. A single mother named Ayesha told the crowd that she had been on the Section 8 waiting list for eight years, and still hasn't received any help. She is paying 80% of her income on rent, and has been forced to go months at a time without water, gas or lights. George Tucker, another member of STAND, and also (like Mickey Palmer) a former merchant mariner, told the assembled crowd his story of being evicted from his apartment because HANO lost his paperwork. Because of bureaucratic carelessness, he was homeless for 13 months. "This governmental crookedness is not new," he said. "But it cannot continue without consequences."

Last week, at least partly in response to criticism from folks like the members of STAND, HANO announced that they would accept new applications for Section 8 vouchers, for the first time in six years. The period that they will accept applications in is only a week long -- from September 6 through 12.

"My best friend died three weeks ago in this chair," says Mickey Palmer gesturing next to him in his room in the abandoned hospital. "There was two other people staying here with me. One gentleman got in an accident about two months ago and he's paralyzed in the hospital. Another friend of mine OD'ed and died here three weeks ago. My best friend. So I'm here alone."

Palmer also fears police harassment. "The police hate homeless people," he declares. "They'll arrest me on drunk in public," he says. "I haven't had a drink in months." Gesturing around the room that he has made into a home, he adds, "Of course, this is illegal. If I get caught I can not only be evicted, but incarcerated. I could go to jail for trespassing."

This fear drives the homeless further underground, and makes it even harder for organizations like UNITY to find them and offer help. "Our city has a long history of police criminalization of homelessness, so people have reason to hide," explains Martha Kegel.

Despite the size and scope of this problem, help has been hard to come by, from either the city, state, or federal government. "I'm not a politician and I'm not politically savvy," says Palmer. "But I don't think they care."

In a rare step forward last month, both houses of Louisiana's legislature unanimously passed a bill creating a statewide agency -- to be almost entirely funded by the federal government -- to address the issue of homelessness. However, Governor Jindal vetoed the bill. Jindal also vetoed funding for the New Orleans Adolescent Hospital, further reducing medical and mental health services in the city -- another factor that has made life hard for many homeless folks in the city. As rates of mental illness rise in the city, we now have less treatment available then ever before.

For people like Mickey, caught in a city with few good paying jobs, much more expensive housing, and ever-decreasing social services, there are not many options. "At one time we were part of the city and part of the workforce," Mickey says. "But people cannot afford the housing in New Orleans anymore. I find most of the people I know, my friends, they can't afford the rent."

Like most people in his position, Palmer has felt hopelessness at his plight.  "I try not to get depressed, he says, nervously flicking his lighter. "But this can get you depressed. Coming back here last night got me a little depressed."

Jordan Flaherty is a journalist, an editor of Left Turn Magazine, and a staffer with the Louisiana Justice Institute. He was the first writer to bring the story of the Jena Six to a national audience and his reporting on post-Katrina New Orleans shared a journalism award from New America Media. Audiences around the world have seen the reports he's produced for Al-Jazeera, TeleSur, and Democracy Now. He can be reached at neworleans@leftturn.org.

A Portrait of Mississippi: A new report shines light on poverty in the struggling state