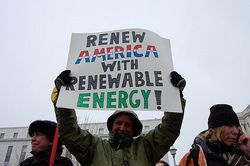 A coalition of more than 300 organizations including faith, human rights, social justice and environmental groups will be delivering letters to the local offices of U.S. senators this week calling on them to strengthen climate legislation narrowly passed by the House of Representatives in June.

The effort is part of a broader grassroots initiative that aims to demonstrate support for bold leadership in the fight to solve the climate crisis.

"We're organizing on the ground, in communities around/throughout the country, to mobilize the everyday people who will feel climate impacts, and to defeat the entrenched, polluting special interests in Washington and pass a truly strong bill in the Senate," says JW Randolph of Appalachian Voices, an environmental advocacy group headquartered in Boone, N.C.

Other groups involved in the initiative include Greenpeace, Friends of the Earth, the United Church of Christ Network for Environmental and Economic Responsibility, and the Center on Race, Poverty and the Environment.

The push to strengthen the legislation comes as a recent ABC-Washington Post poll found that the majority of Americans -- 57% -- supports the changes to U.S. energy policy being put forth by Congress and the Obama administration. Another 29% oppose the proposed changes, while 14% have no opinion.

In the letter to senators [pdf], the signatories express "profound concern" about the American Clean Energy and Security Act, also known as the Waxman-Markey bill, which they criticize for containing massive giveaways to polluters and for failing to ensure the fastest possible transition to clean energy. The letter calls on lawmakers to ensure that the Senate version would:

* Reduce atmospheric carbon dioxide levels to 350 parts per million, a level that scientists say is necessary to avoid the worst effects of climate change. ACES is based on a target concentration of 450 ppm.

* Minimize the use of offsets and other loopholes. ACES creates a system that would allow polluters to increase carbon emissions at one locale if they invest in projects that offset those emissions elsewhere.

The effort to strengthen the climate legislation comes as polluting interests are stepping up their efforts to fight the existing bill, occasionally using tactics designed to appear grassroots but that are in fact part of a corporate-funded public-relations campaign.

For example, when a group called EnergyCitizens announced earlier this month that it would be holding a series of rallies to oppose the climate legislation, the Wall Street Journal exposed the organization as an alliance funded by the American Petroleum Institute.

Also opposing the existing legislation is a new group called the Federation for American Coal, Energy and Security, or FACES of Coal, which claims to be an "alliance of people from all walks of life." But bloggers revealed recently that the group's website is hosted by K Street P.R. firm the Adfero Group -- and that the people pictured on its website purporting to show average Americans who support the coal industry are in fact stock photos.

Adfero's clients also include Koch Industries, the largest privately owned U.S. oil company whose principals are major funders of efforts to deny the reality of global warming, and the U.S. Chamber of Commerce, which is also leading efforts to fight greenhouse gas regulation.

President Obama wants to have the climate legislation passed into law before December, when he and other world leaders will gather in Copenhagen, Denmark to craft a new global climate treaty to replace the Kyoto Protocol. An International Day of Climate Action is planned for Oct. 24 to draw attention to the 350 ppm goal.