As the health care public relations battle continues, the Obama administration is making moves to reframe the health care debate as "a core ethical and moral obligation."

President Obama test drove this new messaging on Wednesday evening in a health care conference call with thousands of religious leaders. Putting more emphasis on the "moral imperative" of insuring the uninsured, Obama explained: "I believe that nobody in America should be denied basic health care because he or she lacks health insurance."
"The one thing you all share is a moral conviction. You know this debate over health care goes to the heart of who we are in America," Obama said. "It is a core ethical and moral obligation that we look after each other...In the wealthiest nation on earth, we are neglecting to live up to that call."
Finding fresh ways to talk about socio-economic issues is not new in the health care advocacy community. Even as the Obama administration searches for a new way to pitch their proposed health reform, human rights groups and grassroots social justice networks have already been hard at work trying to shift the language and the thinking surrounding health care in the United States. They are using an oft-overlooked notion in the United States: "human rights."
So far the Obama administration has not used "rights" language in calling for health care reform. Instead Democrats have primarily been discussing health care reform through the lens of economic incentives and the market, even though they are now adding in some religious and moral framing.
Nevertheless, calling health care a human right and arguing that the U.S. government has an obligation to ensure affordable, accessible healthcare for all, social justice organizers are working to reclaim the health care discussion. They're reframing the call for health care as one for human dignity, justice and equality.
Through the Lens of History: Human Rights in the United States
The struggle to recognize health care as a human right is situated in a growing national movement aimed at using the human rights framework in working for socio-economic justice. The push for economic and social human rights is not new struggle in the United States.
On the ground the push for these rights flourished amongst the poor, workers' and minority rights movements of the 19th and 20th centuries. Although not couched in a rights-based framework at the time, these were essentially the earliest rumblings of a socio-economic rights-based movement in the United States. The strikes of the 1920s and the struggles of the 1960s would go on to significantly impact the reform agenda of the political establishment. 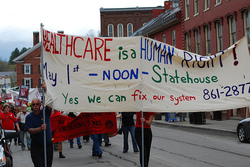 Today as the inequality between the rich and poor widens domestically, there has been a surge of interest in using a rights-based approach in community organizing and advocacy. For the past several years, grassroots organizations across the country have worked to document and educate around issues such as heath care, living wage jobs, free higher education, and affordable housing through a human rights lens.
While grassroots support for economic and social rights like health care is widespread, the principle exception still remains the U.S. leadership, whose attitude has varied considerably from one administration to another. In this sense, history paints a picture over the last half a century of a United States constantly reexamining the role of economic and social rights in the domestic and international arena.

Following World War II, the United States became one of the primary architects of the visions and mandates of the newly formed United Nations. The United States went on to play a key historical role in creating and developing human rights standards for economic and social rights.
In addressing congress on January 9, 1941, President Franking D. Roosevelt gave his Four Freedoms speech, articulating the relationship between socio-economic rights and freedom. He declared "freedom from want" to be one of four essential liberties necessary for human security.
Roosevelt's vision, encapsulated in his notion of a "Second Bill of Rights," would go on to influence the Universal Declaration of Human Rights, which was adopted by the United Nations in 1948. Within the UNDHR, articles 23, 25 and 26 guarantee certain socio-economic human rights, particularly the right to housing, food, education, health care and a job at a living wage.
Human rights advocates point out that although the United States still proclaims international leadership in human rights today, it often denies the application of international human rights law, especially economic and social rights, domestically. The legacy of harsh Cold War politics and a conservative backlash against social welfare safety net systems has made the fight for socio-economic human rights a difficult one in the United States. The United States also did not ratify most of its major human rights treaties until the 1990's, and it only did so with significant limitations that do not allow for their direct enforcement in U.S. courts.
This ambivalence to international human rights law partially explains why human rights -- and socio-economic human rights in particular -- are virtually unrecognized in the United States. Activists also say that this is why the United States faces the highest rate of child poverty among industrialized nations -- with its 50 million people without health insurance, more than 36 million people suffering food insecurity, and millions of working families unable to afford basic needs such as housing and health care.
Despite the U.S. government's refusal to ratify treaties such as the International Covenant on Economic, Social and Cultural Rights, social justice movements in the United States still have a history of using human rights as one of their many tools in creating fundamental change. Using the human rights framework has allowed advocacy groups to build broad-based coalitions to further their goals and to base their claims on violations of international human rights law. Human rights became a teaching tool to give activists a better idea of why socio-economic rights were actual rights, and not just privileges. This type of organizing framework can be seen in the work being done to promote health care as a human right.
As the National Economic and Social Rights Initiative, a human rights group based in New York, explains on their Web site:

Rising inequity in U.S. society and the failure to recognize economic and social rights play a significant role in the domestic health care crisis. Our fragmented health care financing system is rife with problems that lead to a wide range of human right to health abuses. The most visible is the 47 million people with no form of health insurance, the most distressing is the number of preventable deaths, estimated by some to reach 101,000 people a year, simply due to shortcomings in the way health care is organized in the United States.

This crisis persists despite available resources to protect the right to health, and despite record levels of health care spending in the United States.

Human rights groups like Amnesty International and NESRI say that the current health crisis presents an opportunity for bringing a human rights perspective to domestic health policy -- to shift the debate from health care as a commodity to health care as a human right.
Closing the Gap
The United States is the only industrialized country that does not recognize the human right to health, and it is the only industrialized nation to deny its citizens universal access to medical services. Fully one-third of the population lacks health insurance for at least part of the year. Of the 50 million who are completely uninsured, 80 percent work full or part-time. 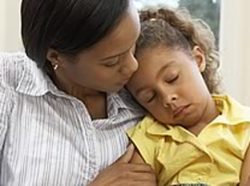 The crisis in health care access is most acutely felt in rural communities, poor communities and communities of color. Minorities and low-income populations experience serious disparities in rates of insurance and access to health care. A June report by the U.S. Department of Health and Human Services found that 40 percent of low-income people in the United States do not have health insurance.
According to the report:

Low-income Americans and racial and ethnic minorities experience disproportionately higher rates of disease, fewer treatment options and reduced access to care. With unemployment on the rise, the disparities already apparent among these groups will continue to increase.

The disparities are so stark that whites in the U.S. are expected to live six years longer on average than African Americans. Human rights advocates point out that this gap can be largely attributed to the notion that health care is simply one commodity among others, a privilege for those who can afford it rather than a fundamental human right for all.
Campus Progress argues that the health care reform campaign needs to reframe it's push as one that supports the right to health, instead of the economic efficiency of the health insurance market:

[T]here are questions that have yet to be raised, and they may be the most important ones to ask: Why would we continue a system in which the health needs of a human being are reducible to a commodity? How can we ensure that every American has equal access to a quality system that meets the fundamental needs for human health? How can we ensure that no matter what class, race, gender, or sexual orientation, our citizens will not be denied care or go bankrupt trying to pay for treatment of their illnesses?
...
A human rights approach focuses on the underlying purpose of the health care system. The core human rights demand is for outcomes consistent with internationally-recognized standards. Framing health care reform as a matter of right establishes a mechanism for government accountability and encourages public participation in the decisions that affect our lives and well-being.

Political observers are also weighing in on reasons why the health care debate is really an equal rights issue. In a Newsweek editorial this week, Jonathan Alter suggests that the Obama administration reframe health care reform as a civil rights bill, underscoring that health care reform must highlight 'the moral principle of nondiscrimination."
Calling health care legislation the "most important civil-rights bill in a generation, though it is rarely framed that way," Alter goes on to underscore:

Passage would end the shameful era in our nation's history when we discriminated against people for no other reason than that they were sick. A decade from now, we will look back in wonder that we once lived in a country where half of all personal bankruptcies were caused by illness, where Americans lacked the basic security of knowing that if they lost their jobs they wouldn't have to sell the house to pay for the medical treatments to keep them alive. We'll look back in wonder -- that is, if we pass the bill.