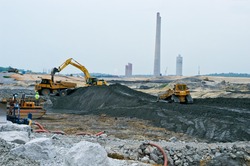 Exposure to dust and river sediment in the area of the massive coal ash spill from the Tennessee Valley Authority's Kingston power plant could present a health risk to local communities.

That's the finding of a study published this month in the journal Environmental Science & Technology. It's the first peer-reviewed, double-blind research paper to examine potential human health effects from the spill, according to Duke University's news office.

The authors include graduate students and researchers from Duke's Nicholas School of the Environment and Pratt School of Engineering, the Duke Comprehensive Cancer Center and the Georgia Institute of Technology.

"Our findings emphasize the fact that although you may stop the emission of toxic elements from coal-fired power plants into the air, they remain in the fly ash that gets stored in power plants' containment ponds, and may still end up in the environment," said study author Avner Vengosh, associate professor of earth and ocean sciences at the Nicholas School.

On Dec. 22, 2008 a containment pond at TVA's plant in eastern Tennessee failed, spilling more than a billion gallons of coal ash. In the weeks following the disaster, a team of Duke scientists analyzed sediment and water samples collected from the areas of the spill, including locations downstream and upstream on the nearby Emory and Clinch rivers. They found high levels of toxic metals and radioactivity, including 75 parts per million of arsenic, 150 parts per billion of mercury, and eight picocuries of per gram of total radium.

As long as the sludge remains wet, risk of exposure via inhalation remains slight -- but that risk increases as it dries out. People already suffering from lung disease or infections would be especially susceptible to health problems from airborne coal ash dust.

During the ongoing the cleanup, TVA has worked to prevent the spilled ash from becoming airborne by vacuuming it up, wetting the ash and growing grass on top of it.

The Duke research team has also begun a program to monitor mercury levels in the nearby rivers with a $105,000 grant from the National Science Foundation. That program is examining the impact of high mercury levels on aquatic life.

Vengosh notes that there are hundreds of similar coal-ash storage ponds located throughout the United States, most of  them located next to rivers. Unregulated by the federal government, the ponds are subjected to an uneven patchwork of state rules.

The findings about the health risks of the spilled coal ash come as TVA is considering shutting down at least two of its oldest coal-fired plants. TVA's fleet of 11 coal plants is among the nation's oldest, with an average age of over 47 years.

At its board meeting last week, TVA President Tom Kilgore said the federal utility is studying whether to close its John Sevier Fossil Plant near Rogersville, Tenn. and the oldest of six units at the Widows Creek Fossil Plant near Stevenson, Ala., the Chattanooga Times Free Press reports:


In next year's budget, TVA plans to begin building an $820 million, combined-cycle, gas-powered plant to replace the generation at the John Sevier plant. With power demand down because of the recession, TVA also has reduced power production this year from the oldest six units at Widows Creek.

United Mountain Defense, a Tennessee-based nonprofit working to halt destructive coal mining practices, reports that TVA has been buying property around the Widows Creek plant to create a safety buffer around the plant's coal waste dumps.

Earlier this year, a leak of as much as 10,000 gallons of coal waste from a storage pond at the Widows Creek plant contaminated a tributary of the Tennessee River.