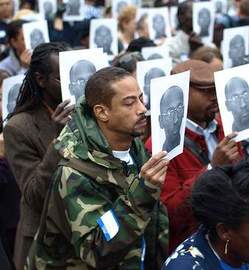 In what legal experts are calling a highly unusual step, but a major breakthrough, Monday the U.S. Supreme Court ordered a new hearing for death-row inmate Troy Davis, the 40-year-old African-American man from Georgia who faces execution despite widespread concern Davis is an innocent man.

Davis has been on death row since 1991 for the 1989 murder of off-duty white Savannah policeman Mark MacPhail. Despite his 18 years on death row, Davis maintains his innocence, and legal experts and human rights advocates say there is enough evidence to back up his claim.

Monday's Supreme Court decision instructed a lower court to "receive testimony and findings of fact as to whether evidence that could not have been obtained at the time of trial clearly establishes [Davis'] innocence." Advocates are calling the high court's order a crucial and important turn of events, and Davis' attorneys say that a new trial would allow them to show new evidence that could prove Davis was mistakenly identified as the killer.

The original witness testimonies were the backbone of the prosecution's case against Davis because of the absence of a murder weapon, fingerprints and DNA evidence. Since Davis' trial, seven of nine key prosecution witnesses who testified against him have recanted their testimony, and other witnesses have said another man confessed to the killing. Despite these witness' recantations and the exculpatory statements of additional witnesses pointing to another man as the shooter, over the last couple of years federal and state courts have repeatedly denied Davis' request for a new trial to present the new evidence. The ruling on Monday, as the Atlanta Journal-Constitution reported, was Davis' "last chance in the court system."

Ruling in favor of Davis, Justice John Paul Stevens cited prior court precedent that said it would be "an atrocious violation of our Constitution and the principles upon which it is based" to execute an innocent man. Steven added that "the substantial risk of putting an innocent man to death clearly provides an adequate justification for holding an evidentiary hearing."

In the last two years, Davis has come within hours of lethal injection three times but has been granted a stay each time. When Davis' last stay of execution expired on May 15, lawyers filed a last-ditch appeal to the Supreme Court, asking that the case be sent back to a federal judge for an evidentiary hearing that would include witnesses whose testimony has never been heard in court.
A Movement Grows 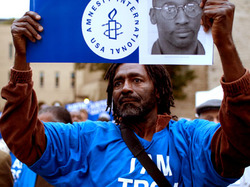 Grassroots activists have helped to push Davis' case into the national spotlight, and have made his appeal for a new trial one of the most high-profile death penalty cases in the United States. The Troy Davis case has also become a rallying cry amongst death penalty opponents across the nation and around the globe, birthing one of the largest anti-death penalty movements in recent years.
Groups such as Amnesty International and the National Association for the Advancement of Colored People have organized around Davis' innocence, staging national and international days of action that have included large mobilizations, rallies, vigils and petition drives to stay Davis' execution and in support of a new trial.
The movement has gained the attention and support of influential advocates, including former President Jimmy Carter, Civil Rights icon John Lewis, Nobel Prize laureate Archbishop Desmond Tutu, and Pope Benedict XVI, as well as the European Union, the European Parliament, the Secretary General of the Council of Europe, former FBI Director William Sessions, and former and current members of U.S. Congress Bob Barr, Carol Moseley Braun and John Lewis. 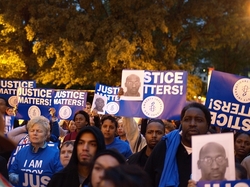 Death penalty opponents see the growing movement to free Davis as a way to bring more people into the wider anti-death penalty movement, and to educate the broader public about the racial disparities in the criminal justice system and in the application of the death penalty.
The movement against the death penalty is also growing in the South. As Facing South has reported, executions have become a Southern phenomenon in many ways. in fact, the South has performed 80 percent of all executions since 1977, according to the Death Penalty Information Center. Texas and Virginia alone account for 45 percent of all U.S. executions.
More than anything, Davis' case, situated as it is in the South, has helped to shine a light on the way the death penalty plays out in the region.
As NACCP president Benjamin Jealous recently wrote in The Nation:

Adding to the sense of urgency around the Davis case, too, is the long, sour history of wrongly-accused black men receiving "rough justice" in the Deep South. Davis was convicted in Chatham County, a place where genteel traditions and picturesque antebellum mansions mask the harsher truths about the history of slavery, racism, and the Jim Crow era that is still imprinted on the region. Chatham County is home to about 250,000 of Georgia's 9.7 million residents but it has produced 40 percent of all death row exonerations in the state.

What I learned at my arrest at Troy Davis' execution