Skip to main content
Join the voice for a changing South.
Donate Today
By Sue SturgisAugust 6, 2009 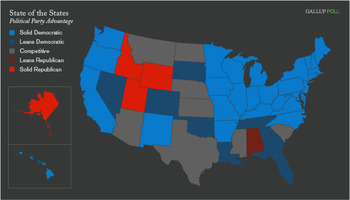 Challenging commonly-held stereotypes about regional politics, a new poll finds there are only four solidly Republican states left in the nation -- and not a single one of them is in the South.

An analysis released this week by the Gallup Poll finds that only Idaho, Wyoming, Utah and Alaska can now be classified as "solid Republican" states, with Alabama categorized as "leans Republican." South Carolina, Mississippi and Texas -- states traditionally thought of as firmly in the GOP camp -- are now classed as "competitive." (Click on map above for a larger version.)

Meanwhile, three other Southern states that were deemed competitive in a similar poll conducted last year have since gone over to the Democratic side, with Florida and Georgia leaning Democratic and Virginia now considered solidly so.

"While the Republican Party is still able to compete in elections if they enjoy greater turnout from their supporters or greater support for its candidates from independent voters, the deck is clearly stacked in the Democratic Party's favor for now," the analysis concluded.

The most Republican states in the nation are Utah and Wyoming, a status that hasn't changed since last year. Massachusetts remains the most Democratic state, along with the District of Columbia. In all, 30 states including D.C. are solidly blue, compared to only four that are solidly red.

The poll comes as the national Republican Party finds itself struggling for traction -- and as some Republicans are blaming Southerners for their problems. As retiring U.S. Sen. George Voinovich (R-Ohio) recently told the Columbus (Ohio) Dispatch:

"We got too many Jim DeMints (R-S.C.) and Tom Coburns (R-Ok.). It's the southerners. They get on TV and go 'errrr, errrrr.' People hear them and say, 'These people, they're southerners. The party's being taken over by southerners. What they hell they got to do with Ohio?'"

Washington Post columnist Kathleen Parker, a native Southerner and a conservative, wrote about Voinovich's remark this week -- and concluded he "was not entirely wrong:"

Not all Southern Republicans are wing nuts. Nor does the GOP have a monopoly on ignorance or racism. And, the South, for all its sins, is also lush with beauty, grace and mystery. Nevertheless, it is true that the GOP is fast becoming regionalized below the Mason-Dixon line and increasingly associated with some of the South's worst ideas.

As evidence, she points to the recent poll commissioned by the liberal blog Daily Kos that asked participants if they believe President Barack Obama was born in the United States. It was conducted in response to the so-called "birther" controversy that holds Obama was actually born in his father's homeland of Kenya -- despite his Hawaiian birth certificate, a birth announcement in a Hawaiian newspaper that was placed there by the state Department of Vital Health Statistics, and the dismissal of two federal lawsuits that challenged his citizenship.

Answering that they did believe Obama was a natural-born U.S. citizen were 93% of people in the Northeast, 90% in the Midwest and 87% in the West. But only 47% of those in the South agreed, with 30% of Southerners and the same proportion of Republicans overall saying they weren't sure. Observed Parker:

Southern Republicans, it seems, have seceded from sanity.

But as she also noted, it's hardly fair for Republicans to blame Southerners for all of their party's woes. After all, the GOP since the time of Richard Nixon has employed a strategy of cultivating votes by appealing to white Southerners' hatreds and fears. That strategy was alive and well during the last national election, and it continues today among politicians from the South and elsewhere who are pandering to those who will not accept that the nation's first African-American president is really an American.

Unfortunately, though, the prejudices of some Southerners are sometimes used to justify prejudices against all Southerners. As TheHill.com columnist David Hill observed in a recent column titled "Regional bigotry in bloom," some commenters at Daily Kos used the birther poll findings to question whether jury trials should be allowed in Southern states -- with some arguing that they should not. This kind of anti-Southern prejudice overlooks the complex reality of an increasingly diverse region, where as Hill points out Democrats hold majorities in both legislative houses in Alabama, Arkansas, Louisiana, Mississippi and North Carolina.

Parker says she hopes the difficulties the GOP is suffering at the moment represent the "death throes" of this particular ugly style of politics. Gallup's latest findings seem to suggest that a growing number of Americans, including those throughout the South, would agree.

Majority of GOP "underperformers" in 2008 Congressional elections in the South