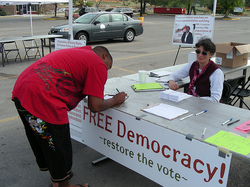 Facing South has followed the numerous campaigns taking root across the South to re-enfranchise former felons over the past few years. Laws denying former felons the right to vote -- termed felony disenfranchisement -- have had a huge impact on politics in the South, in fact taking millions of votes out of the political equation.

Nationally, an estimated 5.3 million people are denied the right to vote in federal elections because of state laws that prohibit voting by people with felony convictions. Some 35 states currently disenfranchise people with felony convictions, even after they have been released from prison. That amounts to some 4 million who are out of prison and living in the community, but unable to vote.
The South has always been disproportionately impacted by felony disenfranchisement, a policy that is a holdover from exclusionary Jim Crow-era laws that included voter suppression, poll taxes and literacy tests aimed at keeping blacks from voting.
As a result deep racial disparities continue to be evident in how the laws are applied across the region. Before changes in Florida's lifetime felony disenfranchisement law in 2007, 18.8 percent of African Americans in the state were ineligible to vote, according to the ACLU.
Nationally, an estimated 13 percent of African-American men today are still disenfranchised, according to the Sentencing Project, making black men the single most disenfranchised demographic in the United States. Given current rates of incarceration, one in three black men could lose the right to vote at some point in their lives. This mass lock-out of a large number of blacks and the poor from the voting booth has had a direct impact on the balance of political power in the South, helping to swing election outcomes, giving Republicans victories by taking away potential minority Democratic votes.
At the national level, rights groups such as the ACLU, Brennan Center for Justice, and the Sentencing Project and have been working to overturn felon disenfranchisement laws and to restore voting rights to former convicts for years.
Today, civil rights and voting rights groups across the country are praising the end result of much of that advocacy -- the Democracy Restoration Act of 2009, a bill introduced in the U.S. House and Senate in June, that would allow people released from prison to vote in federal elections. Sponsored by Rep. John Conyers, Jr. (D-MI) and Sen. Russ Feingold (D-WI), the measure would establish a uniform federal standard restoring voting rights in federal elections to millions of people with past felony convictions.
Currently, across the country there exists a confusing patchwork of felon voting laws that are inconsistent and vary widely by state. Some states may permanently disfranchise citizens with felony convictions, while others allow voting after a sentence is completed or after release from prison. Simply put, a person's right to vote in federal elections is determined by where he or she resides. As the Sentencing Project explained, for example, in West Virginia a person who has completed his or her sentence for a felony conviction can vote in the presidential election, but next door in Virginia someone convicted of the same offense is barred for life from voting. (See this Brennan Center map of the patchwork, state-by-state rules.)
The Democracy Restoration Act would fix this imbalance with uniform voting standards, ensuring that for federal elections an individual's voting rights are not dependent on his or her geographic location.
A Movement Takes Root
Across the country there is a growing movement to restore voting rights to former felons. In the last decade, 20 states have reformed their laws to expand the franchise or ease voting rights restoration procedures. According to the press statement from Feingold's office, the bill directly builds on this growing enfranchisement and reform movement sweeping across the states.
As the Brennan Center pointed out in their blog:

This groundswell has created a national chorus calling for change which now includes law enforcement and criminal justice professionals and a broad spectrum of religious leaders. These groups have come together based on a shared understanding that restoring voting rights to people in the community not only strengthens our democracy, it helps prevent recidivism, protects public safety and is true to the fundamental principles of redemption and forgiveness.

With states relaxing some of their rules or simplifying the process for restoring voting rights, several advocacy groups launched efforts to register ex-felons in those states during the last federal election, bringing tens of thousands of new voters into the political process.
Despite changing laws, there were still many hurdles to getting people back on the rolls. For instance, some former felons were unaware and uninformed of the reinstatement of their right to vote in some states. And in other states complicated re-enfranchisement procedures on top of widespread confusion and misinformation about the proper administration of the varying state laws made the process of restoring the vote even more difficult.
For this reason, community groups across the South are gearing up to support the new act. This week Kentuckians for the Commonwealth, a social justice group that has been campaigning to restore voting rights to former felons in their state, issued a call-out for community members to tell their congresspersons to co-sponsor the act. Kentucky is one of only two states (including Virginia) that still has lifetime disenfranchisement for ex-offenders. Today in Kentucky and Virginia an estimated 25 percent of African-American men are not able to vote.
(Image from Kentuckians for the Commonwealth. Photo by Doug Rigsby.)

Trump's judges will rule on Florida poll tax, despite perceived conflict of interest

Locking Up the Vote: 4 million Southerners disenfranchised by voting restrictions