Skip to main content
Join the voice for a changing South.
Donate Today
By Guest BloggerAugust 19, 2009
By Alan Bean, Friends of Justice 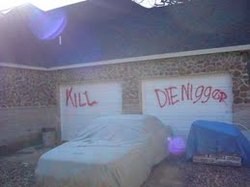 On December 19, 2007, Grace Head, a 66 year-old resident of Arlington, Texas, set her Doberman Pinscher on two black neighbors, Silk Littlejohn and Broderick Gamble after telling them they had to abandon their home. Then, while Gamble was fending off the dog, Grace Head struck Ms. Littlejohn across the head with a 2-by-4. Not satisfied with this atrocity, Head jumped onto the hood of Gamble's Toyota Camry and started stomping.

This is not your average granny.

Returning home from court, Littlejohn and Gamble were shocked to learn that the City of Arlington had ordered the power to their home cut off. City spokespersons have acknowledged that the timing was simply an unfortunate coincidence, a claim the utility company disputes. Utility officials were fully aware that the City of Arlington intended to cut off power to the property but didn't want to end service in the midst of an emotionally taxing trial. For this reason, the city was pointedly asked if it really wanted to cut power on the very day that Grace Head was sentenced. Yes, city representatives said, that's exactly what we want to do.

The City of Arlington is claiming that they gave Littlejohn and Gamble fair warning that the wiring to their home was unsafe. Mr. Gamble disputes that claim.

A little history adds perspective to the dispute.

Littlejohn and Gamble moved into their new home at 704 Ross Trail on July 29, 2005. Two days later, while the couple was attending a family celebration, the home was gutted by fire. When Silk and Broderick arrived home at 10:00 pm they found a note from the fire department attached to the smoking superstructure stating that the home had been consumed by fire at 6:00 pm and that the suspected cause of the fire was an iron that had not been turned off. 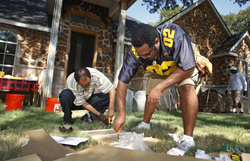 Two problems. First, like most irons of recent manufacture, the appliance in question had an automatic turn-off feature and had not been left near flammable material. Second, the fire department never made a formal investigation of the fire making it difficult to evaluate the legitimacy of the iron theory.

One thing is certain, the insurance company, seizing on the iron hypothesis, refused to cover the home for anything near its full value. This meant that Silk and Broderick had to rebuild the home from scratch with tragically insufficient funds. Since Mr. Gamble is skilled in the construction trades the task was doable, but the financial hurdles were daunting and progress has necessarily been slow. (In the picture above, the Rev. Freddie Haynes of Friendship Baptist Church in Dallas helps his parishioners with the mammoth project.)

It is reassuring to envision Grace Head as a deranged anomaly; a racist exception to the rule. This is unlikely. Head's attack was designed to be as racially offensive as possible. Head was trying to scare the hell out of her neighbors. In fact, before she unleashed her dog, Head identified herself as a community representative and reported that the neighborhood was united in the conviction that Silk and Broderick had to go.

In the months preceding the attack, dead dogs and raccoons (Broderick estimates about a dozen animals in all) were tossed onto the black couples' lawn and front porch. Racial epithets were emblazoned across a stack of wood Broderick had ordered as part of the reconstruction project. Were it not for these over-the-top provocations, the couple may have given up the task of rebuilding a large home from scratch. But Gamble and Littlejohn thrive on adversity.

When Grace Head identified herself as chairperson of the "Run the Niggers out of Town Committee"," Silk and Broderick had good reason to take her threats seriously. Two days after the assault, the words "Kill" and "Die Nigger" were scrawled across the couple's garage door. Did Grace Head wield the paint can? Possibly, but we are probably dealing with a community project.

Silk Littlejohn tells me that, in the aftermath of the fire, a neighbor from across the street came by with a discomfiting message. "I went around the neighborhood taking up a collection to help ya'll, but I only got one donation for three dollars 'cause nobody wants to help." The man then turned on his heel without handing over the three dollars.

"He hadn't gone door-to-door," Silk says. "He just wanted to tell me we weren't wanted and was afraid to say it straight out."

The disgusting graffiti was intended to shock and dishearten Gamble and Littlejohn. The sick theory was that, sickened by such a revolting expression of utter hate, the black folks would turn and run. The gesture had precisely the opposite effect. The couple decided to leave the garage doors untouched.

In conversation last night, I compared the gesture to Emmett Till's mother opening the casket at her son's Chicago funeral so the world would grasp the full enormity of Emmett's gruesome killing.

"There you go!" Broderick said, shaking his head in agreement.

It was at this point that city officials marked Silk and Broderick as persona non grata. The obscene message was beginning to attract attention. It was even reported that a civil rights museum in Selma, Alabama was interested in using the now famous doors as a symbol of present-day racism. 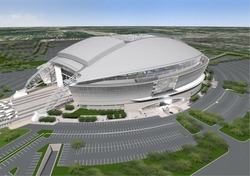 That was the last message the fathers and mothers of Arlington wanted to send to the world. Mayor Robert Cluck had been negotiating with Jerry Jones, owner of the Dallas Cowboys, to have the new Cowboy Stadium (reputed to be the most impressive sports facility on earth) built in Arlington right next door to the baseball stadium used by the Texas Rangers (formerly owned by George W. Bush). With the mammoth structure pressing heavenward and the 2010 Superbowl scheduled for Arlington, Mayor Cluck didn't want his beloved community associated with virulent racism.

I must confess that I don't know much about Grace Head's lineage; but she appears to have important social connections in Arlington. But if Grace Head had been a twenty-something black male and her victim had been a sixty-something white female the jury would have called the crime a felony and sent the perpetrator away for at least forty years. Race, age and social class impact the legal equation in remarkable ways.

There are other signs that Littlejohn and Gamble's refusal to have the racist grafitti removed from their garage door sparked a profound backlash in the community. "On New Years Eve, not even two weeks after those words appeared on our garage door, the city called me eight different times begging me to take it down," Silk tells me. Eventually, the city filed a lawsuit against the recalcitrant couple. In the end, city employees entered the property without a warrant and covered the offensive message in spray paint.

"That's just like the folks in Jena chopping down the tree in the school courtyard," my wife, Nancy, remarked. "If we can't see it, it doesn't exist." 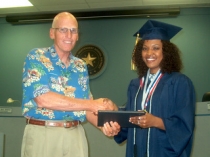 A few months before the assault, Silk's daughter was pulled out of line at her High School graduation, ostensibly for wearing brown shoes. "They had kids in line wearing flip-flops," Silk told me last night, "and my daughter can't graduate because her shoes are the wrong color."

When the school superintendent learned what had happened he was horrified. He quickly arranged a special ceremony just for Silk's daughter and personally handed her a graduation diploma in the presence of AISD dignitaries.

In August of 2008, the Department of Justice worked with the City of Arlington to host a public meeting in response to the hate crime at 704 Ross Trail. Silk Littlejohn and Broderick Gamble were not personally invited to the meeting and only learned about it at the last minute. "I show up," Silk says, "and they tell me I can't attend because I didn't register."

Eventually, cooler heads prevailed and Ms. Littlejohn was allowed to attend a meeting called in response to a hate crime perpetrated on her own person. Later that day, she was appointed to the Arlington Coming Together committee organized to work in consultation with the Mayor's office.

Now, in the wake of Grace Head's trial, Mayor Cluck has decided to scuttle the Arlington Coming Together group in favor of a new committee hand-picked by the city council.

All of this suggests that some Arlington city officials, possibly including Mayor Robert Cluck, continue to harbor a grudge against Silk Littlejohn and Broderick Gamble for insisting that a blatant hate crime be acknowledged for what it is. At the very least, the city could have waited a few days or weeks to cut off the power to 704 Ross Trail. The decision to cut the juice on the very day Grace Head was sentenced was deliberate-the utility company gave the city fair warning that it would look bad and the city said, "Cut 'er off!" This suggests that the City of Arlington wanted the cruel gesture to look bad -- they were sending a not-so-subtle message.

City officials have repeatedly refused to sit down with Silk and Broderick and express their deep regret over the events of recent years. Do Arlington officials have any idea how bad they look right now?

You can take one thing to the bank: Silk and Broderick aren't backing down.

Dr. Alan Bean is the Executive Director of Friends of Justice.