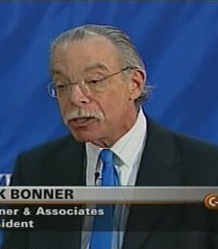 As the Yes Men have shown with their impersonations, misrepresentation is sometimes the best way to convey a larger truth. That same lesson has been demonstrated, albeit unintentionally, by the lobbying firm Bonner & Associates, which was just exposed as having forged letters from non-profit organizations to members of Congress expressing opposition to the climate bill. In this case, the larger truth is that much of the support that corporate interests claim for their policy positions is bogus.

The story came to light thanks to the Charlottesville (Virginia) Daily Progress, which revealed that the office of Rep. Tom Perriello had received letters urging him to vote against the climate bill from two local civil rights organizations -- Creciendo Juntos and the Albemarle-Charlottesville branch of the NAACP -- that were discovered to be forgeries. Additional faked letters were later reported by two other members of Congress.

Soon it was revealed that the letters had been sent out by Bonner, which had been hired by Hawthorn Group to help in its work on behalf of the American Coalition for Clean Coal Electricity (ACCCE), a major coal industry front group. Bonner, which specializes in fabricating what it calls "strategic grassroots/grasstops" campaigns for large corporations, apologized for the phony letters but insisted they were the work of a rogue employee who has been terminated. This has not prevented a firestorm of criticism and calls from the likes of MoveOn.org and the Sierra Club for a Justice Department investigation of the matter.

Environmental groups are entitled to their righteous indignation, but some of this is akin to expressing shock that gambling is taking place in Casablanca. The entire point of the Astroturf work done by the likes of Bonner is to be deceptive -- to give the misleading impression that there is a groundswell of support for the policy positions of big business.

The Bonner firm, founded in 1984 by former Congressional aide Jack Bonner (photo), made its name creating bogus campaigns on behalf of clients such as the banking industry (to fight proposals to lower permissible interest rates on credit cards) and the auto industry (to fight stricter fuel efficiency standards). In 1997 Ken Silverstein wrote a piece in Mother Jones describing Bonner as "a leader in the growing field of fake grassroots" lobbying.

In other words, Bonner is in the business of generating communications to members of Congress that are "real" messages from fake organizations. The current case involves fake messages from real organizations. It's too soon to tell whether this represents a new tactic by the firm or an employee simply got confused about which aspects of the messages are supposed to be bogus. But either way, firms such as Bonner are helping large corporations co-opt political discourse.

Even more ominous are the supposedly spontaneous disruptions of town hall meetings being held by members of Congress. These confrontations are being carried out by rightwing opponents of healthcare reform -- such as the group FreedomWorks -- serving the interests of the for-profit medical establishment. It is bad enough when agents of business try to manipulate "civilized" communication with members of Congress; it is much worse when they begin to act like storm troopers trying to intimidate elected officials from diverging from the corporate line.