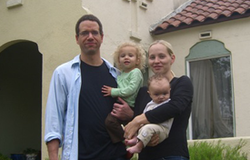 Bank of America is the biggest mortgage servicer in the business. And judging by Treasury Department data, its customers searching for loan modifications are the most frustrated. Through the end of July, it had modified just 4 percent of its most delinquent loans eligible for the government's foreclosure-prevention program - roughly 28,000 out of the nearly 800,000 for which payments were at least 60 days late.
The saga of Ian and Megan Bearce of Glendale, Calif., puts a face to those numbers.
The Bearces have been waiting for a loan modification from Bank of America for three months. Their deadline for a decision has been pushed back twice. Their financial information has gone missing. Their calls have gone unreturned. "
Adding insult to injury," Megan said in June, "is a giant pullout from Money Magazine this month sponsored by Bank of America with advertising stating: 'We're going to work very hard for you to try and get those mortgage payments down to help you stay in your home. That's a huge priority for us.' Right."
She added: "There's all this propaganda, but when you try to work with them, nothing happens. We're in a holding pattern." 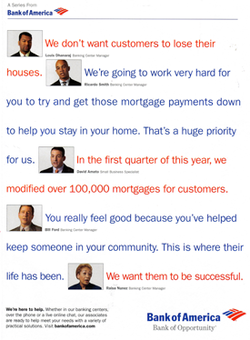 Ian, an executive at a company that produces commercials, called Bank of America on May 15, the day he found out that his salary was being slashed for the second time in two years. The Bearces had just had their second child and could barely afford their monthly expenses. They began eating away at their savings and putting thousands of dollars on credit cards every month, but they managed to keep up with their mortgage payments. They pay $2,866 a month on their first mortgage, including taxes and insurance, and $221 on their second. They also pay health insurance out of pocket; that's another $768 a month.
It turns out they would have had a better chance of getting help early on if they had been less responsible. When Bank of America began modifying loans under the government's Making Home Affordable program in April, it concentrated on borrowers who were already in default, spokesman Rick Simon said.
But when the Bearces called in May, they said, a Bank of America employee told them they weren't eligible for the program because they hadn't missed any payments and because their mortgage wasn't held by Fannie Mae or Freddie Mac. Both claims about the program are untrue (but not uncommon). Housing counselors have complained that employees at participating servicers often display an "alarming ignorance" of the program, as Diane Thompson of the National Consumer Law Center put it at a Senate panel hearing in June.
Simon disputed that account. What the employee probably told the Bearces, he said, was that their loan didn't meet the criteria for loans being prioritized by the bank, but that they might be eligible in the future. (Ian said he had asked to record the call with Bank of America but was told he would be disconnected if he did.)
Megan said they were told in that first phone call that, even though they weren't eligible for Making Home Affordable, "we could send in our financial info and a letter why we were requesting a mod and they maybe could do something."
On May 17, they sent in tax returns, pay stubs, debt and income data, and a letter explaining why they needed help. "We had to send our financial information three different times before they could confirm they received it," Megan said. Finally, on May 26, they were told that all of their paperwork was in order and it would take 30 to 60 days to decide whether to modify their loan.
One month later, the couple hadn't heard. But an hour after ProPublica inquired about the status of their case, they got a phone call from Bank of America -- their first -- and were relieved to finally be assigned a case manager, Terri. Terri told them to wait another 30 days.
Thirty days went by, and Terri wasn't returning their phone calls.
In the early days of August, they were assured by three separate employees that they would have a decision by Aug. 6. That day, too, came and went without any contact.
On Aug. 10, Ian called the bank's 800 number and was given a new deadline: the end of the month. Two staffers offered to try to track down the elusive Terri, who called Ian later that day. She asked him to fax in their 2007 tax return and updated information concerning Megan's income as a therapist, but she couldn't give him a timeframe for a decision.
Terri called again on Aug. 18 and said she was meeting with "management" in the next few days to discuss their case. Megan asked if she thought Bank of America would work with them on any type of modification. Terri couldn't say.
According to Simon, the company spokesman, the Bearce's request is being "actively pursued." In the meantime, they're still current on their mortgage, but their credit card debt is mounting. After paying their mortgage, health insurance and child care costs, "there's not much left for diapers and groceries and gas," Megan said. "Those go on the credit card."
Not all servicers share Bank of America's sluggish performance. JPMorgan Chase, another large servicer participating in the government's program, has helped more homeowners than Bank of America has, despite having about half the number of eligible loans, according to the Treasury Department. It managed to modify 20 percent of its most delinquent eligible loans by the end of July. The average among participants was 9 percent, but that figure takes into account servicers that had signed up just 20 days before. Bank of America, meanwhile, has had four months to implement the program.
Both the media and the administration have publicly flogged the program's laggards, of which Bank of America, which now includes Countrywide, is the largest. "We think they could have ramped up better, faster, more consistently," said Michael Barr, the Treasury Department's assistant secretary for financial institutions, on Aug. 4. "And we expect them to do more."
(Image: 1. The Bearce family; 2. An advertisement for Bank of America's loan modification program.)

INSTITUTE INDEX: Who should bear the burden of cutting U.S. debt?