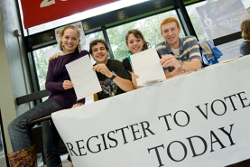 Perhaps signaling a new phase in efforts to modernize the country's antiquated voter registration systems, a new group of unlikely bedfellows has come together to help win support for an overhaul that would put government in charge of proactively registering voters, and allowing voter registrations to be portable within states. Spearheaded by two former general counsels of presidential campaigns, Trevor Potter (McCain 2000 & 2008) and Marc Elias (John Kerry 2004), the Committee to Modernize Voter Registration (CMVR) plans to promote registration modernization and be a resource for those on Capitol Hill.

Both Mr. Potter and Mr. Elias say that their experiences dealing directly with voting systems throughout the country have led them to support fundamental change. As Mr. Potter expressed the impetus for bringing the group together, "Throughout our campaign work, we saw firsthand the inefficiency and needless expense in our paper-based registration system...Both parties recognize that having a 19th Century voter registration system for the 21st Century is not where we want to be."

Joining Mr. Potter and Mr. Elias are a roster of distinguished former elected officials and election experts, including Democrats Sen. Tom Daschle and Rep. Harold Ford Jr. and Republicans Sen. John Danforth and Rep. Susan Molinari. The group also includes leaders of the Pew Center on the States, the Brookings Institution and the American Enterprise Institute. Coinciding with the press conference announcing the new group, Pew released a new issue brief on voter registration modernization, and gave a commitment to help states modernize their registration systems.

CMVR is not putting forth a specific proposal for how to modernize the system, but they believe that,

"the best way to modernize the voter registration system would be to use existing databases to automatically register voters... Additionally, the Committee is advocating for a system that will allow a registration to be portable so that voters are not forced to re-register when they move within a state, and will include a fail-safe mechanism for any Election Day problems. The Committee advocates a commonsense, technologically-based approach to solving many of these problems. For instance, by using existing government databases to automatically register voters, they assert, states and local governments could save scarce financial and staff resources that would otherwise be spent shuffling, entering and reviewing reams of paper registration forms."

This is also the approach that the Brennan Center for Justice, Progressive States Network, other election reform advocacy organizations and a number of academic election experts have advanced since last winter. After the election in November many commentators and election observers noted that many of the problems people were encountering at the polls, and the allegations of fraud that were being made by conservatives, could be resolved if we had a modern voter registration system. When research examining how many people were prevented from voting in 2008 due to these problems indicated that is was 4 million voters, the momentum for change continued to grow. We are excited about the groundswell of support this issue is garnering as it indicates that pressure for change will now be coming from both sides of the aisle.