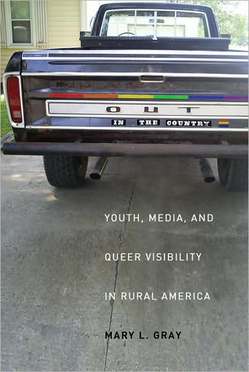 Living in cities like New York and San Francisco has become a modern-day marker of queer authenticity, and media representations like "Queer as Folk", The Advocate, and PlanetOut do little to disabuse us of the notion that small town America is inherently hostile to queer communities. But those of us who have lived queerly in both rural and urban places know this ubiquitous portrayal only shows part of the picture.
A queer-identified woman from a small town in California, Mary Gray's experience lobbying for harassment protection for queer youth in the California public schools prompted her groundbreaking research on what life is like for the young and queer in rural America. The resulting book, Out in the Country: Youth, Media and Queer Visibility in Rural America, discusses the myriad ways the national gay rights movement fails to be fully inclusive of its bucolic brethren, and provides strategies for including the complex needs of rural LGBTQ youth in the national queer agenda.
The advice given to queer and questioning youth by gay rights icon Harvey Milk was simple: Move to the nearest city. Why is this statement a disservice to queer rural youth?
This sentiment effectively tells rural LGBTQ-identifying youth they can't be happily queer right where they are and should expect -- perhaps deserve -- hostility if they do stay in their communities.
Many of the youth I met struggled with reconciling the deep connection or pride they feel for their hometowns with the popular representation of their communities as backward, ignorant and unlivable -- not just for queer folks, but for anyone with taste or class. They feel they're not supposed to see their communities as viable options, and are being told they need to choose between being queerly out of place in the country and moving to a big city to find legitimate visibility.
How does class affect the lives of LGBTQ folks in these areas?
Working class and poor rural communities require citizen solidarity to weather the neglect and marginalization from the nation-state. In this environment, LGBTQ people must be seen primarily as "locals" and risk too much advocating for their concerns as queer folks because familiarity, not difference, ensures one's access to basic necessities.
Beyond churches, there are few resources available in rural communities to cover these basics should one's family be unable or unwilling to provide them. The fact that rural queer youth feel they have to choose speaks to the assumption that queerness not only resides in urban settings, but only comes with social and economic mobility. According to the 2000 Census, rural America is 82 percent white. How do queer people of color navigate their personal and political alliances in a space of overlapping marginalization? Queer youth of color are doubly estranged and, if they openly identify as queer, have more to risk. While parallels drawn by white peers or allies between the civil rights and LGBTQ rights movements might help young people of color feel more connected to LGBTQ activism, this uncritical argument also creates dissonance. As one young African American man named Brandon noted, he could see the connections between the two movements, but ultimately felt a greater responsibility to be a leader among students of color because that's where his community was.
For Brandon, the internet introduced another layer to racial divisions. He went online to find other bi- or gay-identifying men in his region and found almost exclusively white men, some of whom spoke about their desire in ways that struck Brandon as incredibly racist. While Brandon still felt the internet was an important part of allowing him to feel his desire for other men was normal, it also demonstrated how hard it would be for him to synthesize his racial and sexual identities.
How is the internet used by rural queer youth to shape or reinforce one's own queer identification?
The internet's value to rural queer youth identification can't be understated, but its impact cuts both ways. The internet offers an opportunity to explore queer identifications and search for other youth in the area, but it also make things more difficult by homogenizing what LGBTQ life and people are like and erasing the rural from the picture of queer life.
The internet also gives ideas for organizing politically that have no viability in rural communities. A door-to-door voter registration drive for LGBTQ issues won't work in a place where people don't see LGBTQ issues as a local concern. 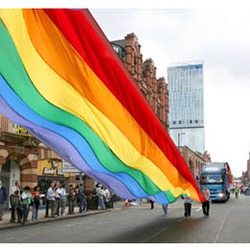 What should national organizations do to re-center rural queer youth needs in the larger gay rights movement?
We need to re-examine our assumption that rural places are endemically hostile to queer folks. The frequency of hate crimes in cities should signal to us that rural and urban spaces are differently [but] not more or less violent to queer people. Without rural communities and their LGBTQ constituents, national and statewide advocacy groups will be unable to advance basic civil rights issues on a national scale.
Assuming LGBTQ life necessarily improves through securing the right to marry without equally valuing, and in rural communities prioritizing, accessible LGBTQ-specific healthcare and job protections will do very little to change the lives of working class and poor rural LGBTQ youth. Anyone who thinks rural queer kids are just a wedding ring away from full citizenship and equality hasn't spent time looking for healthcare or a living wage in rural Appalachia.
Your research was rooted in uncovering best practices for rural queer youth organizing. What strategies did you find?
The importance of coalitional politics in rural communities and the need to prioritize the "localness" of an issue is crucial. In some cases, gay-straight alliances will work, but human dignity student clubs that address homophobia alongside other discrimination may work better to build community support. The argument that non-LGBTQ folks should care about LGBTQ issues like marriage equality because it's "the right thing to do" misses the complicated meaning of marriage and families to people who depend on those institutions for both material and symbolic support.
*
Young people in Athens, GA work to build their own queer community:
Mandy Van Deven is a freelance writer based in India.