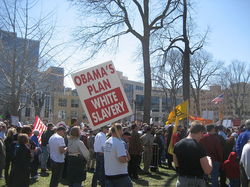 In a 2008 survey, percent of whites with above-average racial resentment who favor a public health insurance option: 19

Percent of whites with below-average racial resentment who favor the public option: 45

Percent of whites with above-average racial resentment who say people should either buy their own health insurance or get it through work: 57

Percent of whites with below-average racial resentment who say the same thing: 25

Date on which Investors Business Daily linked health reform to reparations, in an editorial that also called it "affirmative action on steroids": 7/27/2009

Portion of these racially resentful voters who lived in the South: 46%

Percent of voters under 50 who generally favor health insurance reforms being put forth by Democrats: 57

Partisan advantage enjoyed by Democrats among seniors before last year's election according to several polls: 12 points

Percentage points by which President Obama trailed among older voters than among the electorate as a whole during that election: 8

Percent by which former Democratic President Bill Clinton did better among seniors than overall: 200

Date on which former Democratic President Jimmy Carter said he thought an "overwhelming portion of the intensely demonstrated animosity" toward Obama in the current political debate was based on his race: 9/15/2009

Date on which Obama's press secretary said the President doesn't think criticism of his policies is "based on the color of his skin": 9/16/2009

(Click on figure to go to the original source. Photo by cometstarmoon from Wikimedia Commons.)