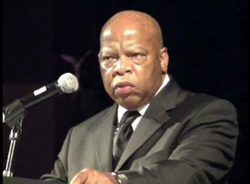 On Sept. 20, 2009, Rep. John Lewis (D-Ga.) -- a leader of the civil rights movement who helped found the Institute for Southern Studies, publisher of Facing South -- gave the keynote address at a gala for Equality Alabama, a civil rights organization focused on gay, lesbian, bisexual and transgender issues. The following is a transcript of his remarks. You can also watch the video of Lewis's speech at Pam's House Blend, a blog about LGBT issues published by Pam Spaulding, an Institute board member. Spaulding delivered the keynote address at N.C. Pride celebration this past weekend, drawing on Lewis's words.

I am so happy to be here; I am deeply moved to be here and to see so many of you here tonight. By this time in America we are engaged in a difficult struggle -- we are grappling with our own inner demons, inner forces of a dark and distant past.

When I was riding on a Greyhound bus, through Birmingham onto Montgomery 48 years ago, if you had told me then that Barack Obama would be President of the United States today, I would have said "You're crazy, you're out of your mind, you don't know what you're talking about."

I remember so well on the day of the inauguration, when I sat in the shadow of the Capitol --- in the glean of the Lincoln Memorial. I was so moved; it was so real and so clear that the America I had known and been brought up in as a little boy, in Pike County, was a different place. It had been transformed. I never dreamed that I would see that day.

When Barack Obama came out of the Capitol, the first person he greeted was me. He gave me a hug, said, "John, I need your help. I need your prayers." I said, "Mr. President, you will have my help; you have all of my prayers."

And while he took the Oath of Office, I looked past the President, past the Washington Monument, and saw the Lincoln Memorial, where we stood 46 years ago. And I heard Dr. King say, "I have a dream today, a dream deeply rooted in the American dream."

I thought about where I stood that day and when I spoke. And in that speech on August 28, 1963, one of the lines that I used, said, "You tell us to wait, you tell us to be patient. We cannot wait; we cannot be patient."

And as a community you will say today, tonight, that you cannot wait; you cannot be patient. You want your freedom and you want it now.

...I have worked too hard and too long.

No government, be it federal or state, should tell a person who you can marry or who you cannot marry. You have a right to fall in love and get married.

... In the House, several of us signed onto the bill to repeal the Defense of Marriage Act. I don't quite understand; two men, two women, fall in love and get married. Whose marriage is being threatened?

I meet so many brothers and sisters that are staying together much longer, and much more loving than some of us that have been in a marriage in another form and another time. So if you can create a loving community, create a loving family, that's your business. It is not the business of the federal government or the state government to get involved.

Yet here we sit, here in Birmingham, in Georgia, and all across our country, trying to say that we must respect the dignity and the worth of every human being. It is in keeping with our sacred principles of our democracy

Our history tells us a little story.

So our struggle is all one struggle. It is not a struggle that lasts just for one day, one week, or one month or one year. It is a struggle of a lifetime, to build a beloved community. A community at peace with itself, that recognizes dignity and the worth of every human being.

So, be yourselves, be at peace with yourself.  If you see something that is so dear and so necessary and so right, speak up, speak out.

When I growing up, only about 150 miles from here, in the fields of Troy, in the fields of Montgomery, fields of Tuskegee, and I saw those signs that said 'white men', 'colored men', 'white women', 'colored women', 'white waiting', 'color waiting' and I'd come home and ask my mother, ask my father, and my grandparents and my great-grandparents, why segregation? Why racial discrimination? And they would say, "That's the way it is. Don't get in the way. Don't get into trouble."

Well, one day I was inspired to get in trouble and get in the way, and for almost 50 years, I've been getting in the way and getting into trouble.

I'm going to tell you a little story. When I was growing up outside of Troy, Alabama, 50 miles from Montgomery, I had an aunt by the name of Seneva. And my Aunt Seneva lived in what we called a "shotgun house." I know here, in this part of the state, you never seen a shotgun house. You don't even know what I'm talking about.

But my Aunt Seneva lived in a shotgun house; she didn't have a green, manicured lawn. Had a simple, plain, dirt yard. And sometimes at night, you could look up through the holes in the ceiling and count the stars. When it was raining, like it's been raining here in the Southeast in the past few days, she would get a bucket, a pail, a tub, and catch the rain water.

In a nonviolent sense: it's an old house, one way in, one way out, maybe a tin roof, where you can bounce a basketball through the front door and it would go straight out the back door.

In the military sense: old house, one way in, one way out, with a tin roof maybe, where you can fire a shotgun through the front door and the bullets go straight through the back door. My Aunt Seneva lived in a shotgun house.

One Saturday afternoon, a group of my brothers, a few of my sisters, first cousins, about 12 or 15 of us young children, went playing in my Aunt Seneva's dirt yard, when an unbelieveable storm came up. The winds started blowing, the thunder started rolling, the lightning started flashing and the rain started beating on the tin roof of this little shotgun house.

My aunt became terrified; she thought this whole house was going to blow away. She got all of us little children inside and told us to hold hands. And we did as we were told.

The wind continued to blow, the thunder continued to roll, the lightning continued to flash, and the rain continued to beat on the tin roof of this little shotgun house, and we cried and we cried. And when one corner of this old house appeared to be lifting up from its foundation, my aunt, this headstrong woman, instructed us to go over to try to hold the house down with our little bodies.

When the other corner appeared to be lifting, she had us go over to that side. We were little children walking with the wind, but we never, ever left the house.

Maybe our foremothers and our forefathers all came to this great land in different ships. We're all in the same boat now. We are to survive, because we survive together.

Gandhi put it one way when he says "nonviolence is nonresistance."

Dr. King put it another way: "We must learn to live together as brothers and sisters or perish together as fools."

So I say to you tonight, hang in there. Don't give up. I got arrested 40 times during the '60s, beaten and left bloody, unconscious, had a concussion on that bridge in Selma. But I didn't give up. I didn't give in. I kept the faith. Some of my brothers and sisters have died in this struggle, fighting for gay rights. The victim of hate, a young man like Matthew Shepard... we must not allow their deaths to be in vain.

I pledge to you tonight, Equality Alabama, as long as I am in the House of Representatives, as long as I live in this country and have breath in my body, you will have a friend in John Lewis. You can count on me.

Thank you very much.

VOICES: The Hyde Amendment hurts Southern families, but it doesn't have to be this way