Skip to main content
Defend democracy in the South.
Donate Today
By Guest BloggerSeptember 8, 2009
By Antonio Ramírez, (reprinted from Wiretapmag.org) 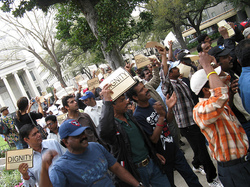 George W. Bush was working hard in the days after Hurricane Katrina.
In August 2005, we watched in horror as the Bush government left residents of New Orleans to fend for themselves against 175 mph winds and rising waters. However, over the following four years many of us were not watching as American construction companies lured thousands of Mexican, South American, Filipino, Indian and other foreigna workers to rebuild New Orleans. For four years, migrant workers have toiled in dangerous conditions for little or no pay.
Ironically, the former president -- criticized for doing too little as winds and water battered the Gulf Coast -- took swift action to create conditions that would make it easy for employers to abuse workers in post-Katrina New Orleans. Bush did his best to create a lawless working environment, permitting employers to rob and cheat workers out of wages on a massive scale.
Hector (PDF) was one of the workers who arrived in New Orleans to rebuild damaged schools. The company bus would pick him up at 5 a.m. and he would wade through knee-deep toxic mud for up to 15 hours a day. Hector worked without protective goggles, masks or gloves. Even after his time in New Orleans was over, he complained that he continued to have unexplained stomach pains and nosebleeds.
Hector was only one of those who toiled in dangerous conditions. As Katrina raged, company recruiters swarmed to poor nations, promising locals plenty of work and good wages. Recruited workers arrived to the Gulf Coast by the thousands. In the years after Katrina, New Orleans' Latino population exploded, rising 45 percent (PDF). Unfortunately, recruiters' promises were often lies.
In 2006, one of the largest hotel chains in Louisiana, Decatur Hotels, LLC, recruited 300 Dominican, Peruvian and Bolivian workers to clean and maintain rooms. The workers were charged thousands of dollars by recruiters but paid less than minimum wage. Some mortgaged their houses or accumulated monstrous debt (PDF) in their home countries, only to earn less than they had originally paid.
In 2007, Latino workers recruited to rebuild an apartment complex damaged by Hurricane Katrina were forced to work for months without pay. In a strange country with nowhere to go, most workers were too scared to complain. When a group of workers did confront their employer, they were evicted and their bosses called ICE to have them deported (PDF).
"Wage theft is nothing new in New Orleans," said NAACP chairman Tracie Washington in a 2006 interview (PDF). "There is a plantation mentality in New Orleans: I don't have to pay to get it done. People think they can get away with it."
And with President Bush's help, many employers did get away with it. Instead of responding to the unfolding humanitarian crisis and bodies in the streets, in the days following Katrina, Bush took direct steps to create an environment that would make access to cheap, foreign labor easy. 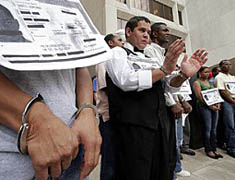 On August 30, 2005, one day after the official end of the storm, Bush's job safety department announced it would not enforce (PDF) basic job safety and health protections for people working in areas damaged by Katrina. Normally, the Occupational Safety and Health Administration (OSHA) would fine employers whose workers handled toxic materials like asbestos without protective equipment. Instead of investigating, OSHA would provide leaflets and post safety information on its website. As a result, employers were able to save on masks and gloves while their workers inhaled mold, suffered untreated injuries or worked knee-deep in contaminated mud.
A week later, the Department of Homeland Security (DHS) announced that it would no longer require New Orleans' employers to file documentation proving their workers' legal eligibility. DHS claimed this change would allow victims of Katrina who had lost their documents to apply for work, but in fact it allowed employers to recruit cheap, undocumented workers without fear. Many contractors used workers' undocumented status or lack of documents as an excuse not to pay them.
Two days later, Bush excused post-Katrina contractors from having to pay the legal prevailing wage of $9.26 an hour, dropping worker pay over 50 percent to the federal minimum wage of $5.15.
Soon after, Bush suspended affirmative action and anti-discrimination requirements for federal contractors working in areas affected by the storm. As a result, most local businesses, especially those that were minority-owned, were shut out of reconstruction efforts.
Bush had set the stage; he had given contractors license to recruit, exploit and rob reconstruction workers. In 2007, Southern Poverty Law Center (SPLC) attorney Jennifer Rosenbaum explained how workers consistently reported that they were "underpaid and often not paid at all for their work cleaning out the toxic flood waters and tearing the hospitals, schools, and court buildings down to their skeletal frames for reconstruction."
Post-Katrina workers found themselves in an impossible situation. In an unknown city wracked by natural disaster, workers had little choice but to give in to their bosses' demands. SPLC discovered that workers who did stand up to employers were routinely threatened with deportation, blacklisting or the barrel of a gun. Today, four years after Katrina, 80 percent of day laborers in New Orleans still report that employers have stolen their wages.
While the mostly Latino workers have been trapped in low-paying and dangerous conditions, African American workers have been largely shut out of reconstruction jobs. By law, an employer looking to contract foreign workers must first prove that no American wants the job. With an unemployment rate hovering around 10 percent (PDF), and many New Orleans natives returning to the city, it's hard to believe that no one needs a job.
In fact, many of those active in defending reconstruction workers believe that bosses simply want the cheap, easy labor that Bush helped provide. According to the SPLC, in a recent meeting, a New Orleans hotel manager claimed that no hurricane evacuees applied for the jobs he offered. His explanation: Black people don't like to work.
And with that, a manager -- too racist to hire black workers, stealing wages and fostering unsafe conditions for migrant workers -- sums up the toxic legacy the storm has had for workers in New Orleans and the U.S. And while much of the debris has been cleaned up, four years later, the mess created by the Bush Administration remains.
For more information, visit the New Orleans Workers' Center for Racial Justice.
(Images courtesy of New Orleans Workers' Center for Racial Justice)

VOICES: Workers who win the South change the nation