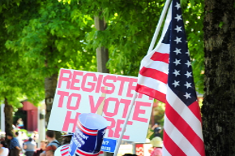 New Jersey and Virginia have critical and likely close elections for governor coming up in November and voter registration deadlines are quickly approaching. Yet both states, according to the most recent census, have huge numbers of unregistered Hispanic and Asian citizens, many of whom are likely new Americans. And that underscores the need to completely re-think the voter registration process, especially for our new citizens: the government should start to share the burden of ensuring new Americans are registered to vote by having the federal agency responsible for immigrant services agency routinely provide voter registration materials and information to every new citizen upon naturalization.

Virginia hasn't historically had a significant immigrant population, but now, according to the Immigration Policy Center, "6.4% of all registered voters in Virginia are 'New Americans'--naturalized citizens or the U.S.--born children of immigrants." In New Jersey, new Americans comprise over 15 percent of registered voters.

Voter registration and community groups in states and cities around the country are undertaking increasingly innovative, strong efforts to keep up with number of naturalized citizens who aren't registered, and such strategies need to be replicated throughout the country. But such efforts will inevitably be limited in scope and resources, and there have even been times when third party efforts to register new citizens at naturalization ceremonies have been blocked by local officials.

In the sample questions the United States Citizenship and Immigration Services provides to citizenship applicants to prepare for their citizenship test, one of the questions is: "What is the most important right granted to United States Citizens?" The answer? "The right to vote." In fact, on page 3 of the Immigration Services "Guide to Naturalization," the government states, "U.S. citizens have many responsibilities other than the ones mentioned in the Oath. Citizens have a responsibility to participate in the political process by registering and voting in elections."

Yet the government does nothing to help them see this responsibility through. It's time for this to change--for the government to start doing more than paying lip service to the importance of voting when putting would-be citizens through the naturalization process.

Currently, under the National Voter Registration Act of 1993, state-based public assistance agencies must provide voter registration services to their clientele and federal agencies may do so if requested to by a state. The United States Citizenship and Immigration Services, the federal agency responsible for implementing the naturalization process, should be designated as an agency under the NVRA and make registering voters automatic upon their naturalization an integral part of their routine responsibilities. Requiring employees who serve immigrants to provide each and every one of our new citizens with a registration form and materials, along with voter education upon naturalization seems an obvious way to foster the political participation that the United States government says it wants to encourage.

And it's not that new Americans don't want to participate--once they are registered, immigrants vote overwhelmingly. In fact, new citizens who are registered to vote have higher rates of voter turnout than natives who are registered to vote. They just aren't given the tools to take the steps to get registered in the first place. And frankly, as long as we're going to continue to require pre-election registration, the onus should not be just upon the citizen to undertake the process on her own.

Whether this reform happens through the larger movement for a complete modernization of the voter registration process or standing alone, the government needs to take some responsibility for helping new Americans, and indeed all Americans, exercise their right to vote. NVRA designation of federal agencies like USCIS is one relatively easy and obvious way to do so.

Tova Andrea Wang is a Democracy Fellow at Demos and The Century Foundation.