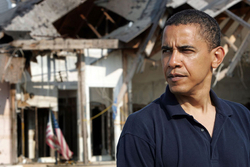 President Barack Obama arrives in New Orleans Thursday morning for his first visit to the city and region since his presidential campaign.
Obama faced a fair amount of criticism for not visiting the region on the fourth anniversary of Hurricane Katrina in August, but he addressed concerns by announcing plans to assess post-Katrina recovery with a Gulf Coast tour before the end of the year.
Thursday's visit is in keeping with this promise, but the trip has become the subject of criticism as well. Obama's whirlwind tour, which will include a visit to a Lower 9th Ward charter school and a town hall meeting at the University of New Orleans, will clock in at just under four hours, a fact that has disappointed many Louisiana lawmakers, community groups and residents.
Although progress has been made with rebuilding efforts in New Orleans over the past four years, challenges remain in a city with more than 60,000 properties abandoned or blighted, with no public hospital to treat the poor, and with inoperable hydraulic pumps that may not protect the city during another flood.
Lawmakers hoped the president would stay longer to meet with local officials and community leaders to discuss a number of these rebuilding challenges, including the crises in affordable housing, education, health care, Category 5 levee protection and coastal restoration. Some Louisiana residents even expressed concerns that the brief visit is a simple "photo op" and "glorified layover."
Neighboring parishes and states are also feeling burned. Gulf Coast lawmakers and activists have been vocal in their disappointment that Obama's visit -- billed as a visit to "the Gulf Coast" -- won't actually include other Katrina and Rita damaged areas outside of New Orleans such as southern Mississippi and southwest Louisiana.
As the Steps Coalition, an alliance of Mississippi nonprofit groups, explained in a recent letter addressed to the Obama administration:

When we learned of your upcoming visit to the Gulf Coast, we too were filled with hope that your visit would include Mississippi where the eye of Hurricane Katrina roared through devastating thousands of homes and families. Working families are still struggling to recover from Hurricane Katrina in the midst of a depressed economy and an unemployment rate of 9 percent. We are pleased that you are fulfilling a commitment to visit the region before the conclusion of 2009; however, we are concerned that there is no plan to visit the state of Mississippi, where we experience the historical gap between working families in Mississippi and federal leaders.

Similarly, editors at the The Sun Herald wrote:

The president's decision, or that of his advisers and inner circle, to visit the one place and not the other, underscores the persisting observation that South Mississippi has faded into obscurity, and that the consequence of four years of the Katrina narrative development is invisibility, even to the president of the United States.

Frustration, exhaustion and disillusionment with the federal response to Gulf Coast rebuilding efforts is nothing new. Still reeling from the Bush administration's failed federal response to the 2005 disaster and its aftermath, residents placed their trust in a new administration. As the Institute for Southern Studies reported in August in a special report, "How is Obama doing on Gulf Coast recovery?" [pdf], for many people in New Orleans and the Gulf Coast, the election of Obama brought a sense of renewed hope that the federal government would recommit to the still-struggling region.
Indeed, Obama promised as much during a February 2008 campaign stop at Tulane University: "I promise you that when I'm in the White House I will commit myself every day to keeping up Washington's end of this trust [to rebuild the Gulf]. This will be a priority of my presidency."
But many Gulf Coast advocates -- leaders from faith, community and environmental groups working in Alabama, Louisiana, Mississippi and Texas -- give the new administration low marks for Gulf recovery efforts, stating that Washington has failed to live up to its promises to make rebuilding a priority and strengthen recovery efforts in the region. The Obama administration received a D+ in our report, only slightly improved from the Bush administration's D-.
Responding to criticisms that Obama has paid little attention to the region, Obama's aides contend that he has made five previous trips to the coast, four as a Senator and one as a presidential candidate. Officials also praise what Obama has delivered in terms of recovery efforts in Louisiana to date -- dispatching senior officials to remove bureaucratic holdups, cut red tape and jump-start stalled programs; "shaking loose" $1 billion in appropriated federal funds to rebuild infrastructure; moving people out of temporary housing; and creating an arbitration panel to handle disputes that have hamstrung rebuilding projects. Most recently Obama signed an order extending the federal office in charge of coordinating recovery and rebuilding efforts in the region for another six months.
Even as frustration and hope continue to find expression along the Gulf Coast, lawmakers and community leaders say what comes next is what matters in the end. More than talk and promises, advocates want to see hard policy and federal action -- such as the passage of the Gulf Coast Civic Works Act (HR 2269) -- to address the region's patchwork recovery.

Along the Louisiana coast, indigenous cultures and communities remain in peril