For at least 170 years, Isle de Jean Charles -- a narrow ridge of land lying between Bayou Terrebonne and Bayou Pointe-aux-Chene in southeastern Louisiana's Terrebonne Parish -- has been home to members of the Biloxi-Chitimacha tribe, native people related to the Choctaw and part of a larger confederation of Muskogees.

But the tribe's history is about to take a dramatic turn due to climate change.

Albert Naquin, chief of the Isle de Jean Charles Band of Biloxi-Chitimacha, recently announced that the group plans to leave its ancestral island homeland and build a new community behind levees on higher ground. He told the Associated Press the decision came because the community was flooded five times in the past six years. About 25 families now live on the island, a number that's fallen in recent years due to the constant flooding associated with global warming.

The state-recognized tribe hopes to use about $12 million in federal aid to build 60 homes in Bourg, a community about 10 miles inland, according to the AP. Officials with Terrebonne Parish and the state of Louisiana still have to approve the relocation plan.

The plight of the Biloxi-Chitimacha people of Isle de Jean Charles illustrates the suffering already being experienced worldwide due to climate disruption.

A recent report funded by the United Nations and the World Bank titled "In Search of Shelter: Mapping the Effects of Climate Change on Human Migration and Displacement" warned that there could be as many as 250 million people displaced by 2050 unless "aggressive measures" were taken to halt global warming.

In fact, as the report pointed out, climate-related displacement is already underway. Environmental change is part of the complex mix of factors behind the world's biggest internal displacement problem in Sudan, where 4.9 million people have fled their homes. In low-lying Bangladesh, more than 5 million people live in areas vulnerable to cyclones and storm surges, and growing numbers are already coping with the danger through temporary migration to urban areas. And in the Mekong Delta of Southeast Asia, farmers are being driven off their land by intensified flooding.

Small island states are especially vulnerable to sea-level rise. This past spring marked the beginning of what's believed to be the world's first evacuation of an entire people as a result of global warming, with the first of the 2,600 people of the Carteret Islands leaving their vanishing coral atoll for the nearby island of Bougainville, part of Papua New Guinea.

The Solomon Times reported that on April 29, 2009, the fathers of the first five Carteret Island families relocated to land donated by the Catholic Church, "bringing their sons to support them in the work leading up to the time when their wives and children will eventually join them."

A matter of time before communities no longer exist 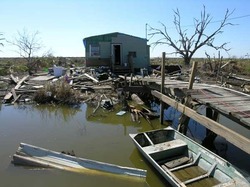 Land loss has long been a problem facing Louisiana, which has seen 1,900 square miles of land vanish since the 1930s and which continues to lose as many as 40 square miles each year to the Gulf of Mexico. With every bit of land swallowed by the sea the loss rate speeds up, since the coastal wetlands and barrier islands act as storm buffers. If action is not taken to slow the current loss rate, the Louisiana shoreline is expected to move inland as much as 33 miles by the year 2040.

Factors behind Louisiana's escalating loss of coastal land include natural subsidence as well as the construction of flood-protection levees, which block the natural deposition of land-building sediment. Meanwhile, the dredging of access canals by the state's offshore oil industry lets in salt water that in turn kills marsh vegetation, further worsening erosion. At the same time, man-made global warming is increasing sea levels through thermal expansion of water and melting continental ice sheets.

A federal government report released earlier this year examining regional impacts of climate change noted that coastal inundation would increase as sea levels rise -- which it called "one of the most certain and most costly consequences of a warming climate."

The cost of shoring up Louisiana's coastline to better withstand storms would be considerable. In 2002, the Committee on the Future of Coastal Louisiana estimated that a comprehensive program to restore the state's coastal wetlands to a sustainable level would cost $14 billion -- and that calculation was done before hurricanes Katrina and Rita, which together wiped out 217 square miles of coastal land in 2005. But of course, that cost has to be weighed against the cost of displacement and destruction in the state's coastal parishes, which are home to more than 2 million people -- 47% of the state's population.

Katrina and Rita were especially hard on the Biloxi-Chitimacha of Isle de Jean Charles, with the community's one church relocated after Rita and its fire station since closed. Hurricanes Gustav and Ike in 2008 also dealt devastating blows to the community.

The tribe had hoped to get some protection from the Army Corps of Engineers' $900 million Morganza to the Gulf of Mexico Hurricane Protection Project -- a controversial plan known by its environmentalist critics as the "Great Wall of Louisiana." The project was designed to protect communities in Terrebonne and neighboring Lafourche parishes from coastal erosion, but the final design for the project did not include Isle de Jean Charles because the agencies involved decided the costs involved outweighed the benefits of protecting so few families.

Naquin reportedly considered suing the federal government for excluding his community from the levee plans but worried about how that would impact his tribe's pending application for federal recognition.

Meanwhile, the Biloxi-Chitimacha are not the only indigenous people of Louisiana to face the loss of their ancestral homelands to rising seas. In the 2007 Institute for Southern Studies report "Blueprint for Gulf Renewal," Chief Brenda Dardar-Robichaux of Louisiana's United Houma Nation described attending a conference on coastal land loss and watching a researcher draw a line across a map of the state showing the area most at risk of being submerged -- which included most of the Houma lands, some of which are already being lost to floods.

"It's just a matter of time before some of our communities no longer exist," Dardar-Robichaux said at the time. And as Houma historian Michael T. Mayheart Dardar has noted, "If settlements are abandoned and populations allowed to disperse, with them goes the cultural integrity of our people."

Though it's rarely noted in most media coverage of man-made climate disruption, the displacement of entire peoples due to a warming climate and rising seas has implications under human rights agreements such as the United Nations' Guiding Principles on Internal Displacement, a set of U.S.-endorsed standards that govern the treatment of people uprooted by natural and man-made disasters. As Guiding Principle 9 says:

States are under a particular obligation to protect against the displacement of indigenous peoples, minorities, peasants, pastoralists and other groups with a special dependency on and attachment to their lands.

The situation facing the Biloxi-Chitimacha of Isle de Jean Charles raises the question: Is the United States really doing all it can to protect against climate-related displacement? It's something leaders need to think about as they craft federal climate legislation and prepare for the international conference on climate change in Copenhagen this December.

(Photo of a storm-wrecked house on the island from the humanitarian aid organization Plenty International.)

Losing its land to the Gulf, Louisiana tribe will resettle with disaster resilience competition award money