Skip to main content
Join the voice for a changing South.
Donate Today
By Desiree EvansOctober 2, 2009 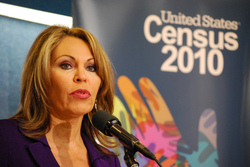 Thursday the U.S. Census Bureau and Latino advocacy groups launched a campaign to heighten Latino participation in the 2010 census and to tackle current Census fears.

As the Houston Chronicle reports:

Arguing that a significant undercount of Hispanics in the 2000 census cost states such as Texas millions of dollars in federal funding, Latino groups and labor unions are collaborating with Census Bureau officials on a campaign that will include the public service announcements on Spanish-language television channels, communication kits for Latino community leaders and a 24-hour bilingual census hot line.

The campaign's organizers estimate that during the 2000 census, about 1 million Latino residents went uncounted. Their goal is to convince Hispanics that responding to the census is quick, easy and safe -- whether or not the person is living here legally.

As Facing South has reported, Latinos remain one of the historically undercounted populations, especially in the South. Community advocacy groups continue to stress the importance of getting an accurate count since the 2000 Census produced an undercount of Latinos of around 3 percent -- about 1 million people -- resulting in the loss of millions in federal funding.

A large undercount could mean communities and populations do not get their fair share of public funding, an increasingly important issue in the midst of the country's deepening economic troubles. This is a critical issue for many Southern states like South Carolina, which has the fastest-growing Latino and immigrant population in the country. Traditionally, mobility patterns, language barriers and deportation fears have made Census taking a difficult enterprise in some Latino communities. The Census count also faces a new challenge this year, as community groups and the Census Bureau work to counter calls by a handful of Hispanic advocacy groups asking undocumented immigrants to boycott the 2010 Census to protest the lack of immigration reform.

In terms of the media campaign, Spanish-language television and newspapers plan to run messages stressing that the Census is important to bringing federal funds to communities and greater political power. As the Chronicle reports, Univision, the largest Spanish-language broadcaster in the United States will air public-service announcements and motivational messages on the Census in its television and radio programs and news shows. The Census Bureau is also mailing bilingual questionnaires to about 13.5 million households in areas where at least a fifth of them use Spanish as their primary language, according to the Chronicle. The Washington Post reports that the Census Bureau estimates it will spend almost $28 million on advertising in Hispanic media for the 2010 Census, up from $19 million for the 2000 Census.

Here's one of the Spanish-language PSA videos:

Here's a video featuring Robert Groves, director of the U.S. Census Bureau, explaining the importance of an accurate count for Latino communities:

CENSUS WATCH: Report urges an accurate count of the undocumented