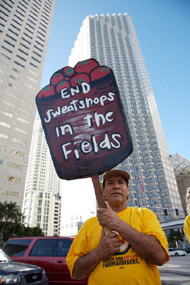 After two years of delay, farmworkers in Florida will finally start getting a penny more per pound for tomatoes they pick.
Organizing with the Coalition of Immokalee Workers (CIW), farmworkers had reached agreements over the last five years with Yum Brands, McDonald's, Burger King, Subway, and Whole Foods to improve harvesters' wages and working conditions, but the Florida Tomato Growers Exchange (FTGE), a powerful industry lobby group, had blocked efforts to pass on the raise to workers, leaving the money in escrow. Now one of the largest growers has broken ranks and agreed to pass on the extra penny, which gives that grower an edge in selling to the chains.
CIW members were joined September 25 by Secretary of Labor Hilda Solis and representatives of the food service company Compass and the tomato producer East Coast Growers and Packers to announce the accord.
With the support of Compass, which had $9 billion in revenues last year, the CIW has effectively broken the logjam of resistance created two years ago by the FTGE.
And with employers' unity cracking, farmworkers expect that other growers may jump, too--and that the deluge of worker and consumer pressure will convince industry leaders to finally address unconscionable labor abuse in the Florida tomato fields.
Since 2007, the CIW had been unable to secure a large Florida grower willing to meet the higher standards set and funded by the agreements between CIW and the food retailers. East Coast Growers and Packers is the third-largest producer of Florida tomatoes, and Eric Schlosser, Fast Food Nation author and longtime observer of the CIW campaign, described its announcement to implement the CIW program as "the greatest victory for farmworkers since Cesar Chavez in the 1970s." CIW members were joined September 25 by Secretary of Labor Hilda Solis to announce the accord. Photo: Alan Pogue.
The agreement between the CIW and Compass outlines two key areas of reform to be put in place within the retailer's tomato supply chain. 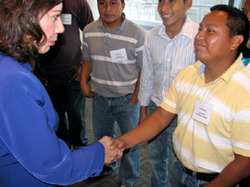 First, workers harvesting tomatoes for Compass will receive an immediate raise. The accord requires Compass to pay an additional penny per pound for the tomatoes it purchases, as a supplement to the picking piece rate, with the ultimate goal of a guaranteed minimum fair wage for harvesters. This means an extra 32 cents per bucket for tomatoes harvested under the Fair Food agreements, a raise that ranges from 60 to 80 percent depending on where a worker is employed.
Average wages for a Florida farmworker are about $10,000 a year currently.
Second, the agreement provides a framework to improve working conditions at the farm level. Suppliers are now required to cooperate with the CIW to improve wage and hour record-keeping, to establish employee-controlled health and safety committees, to create a worker grievance system, and to permit third-party auditing for full transparency. Significantly, the CIW is allowed to conduct worker education on company time and property.
The CIW contends worker education and participation are essential to the supplier standards' having a real impact on the agricultural industry. Towards that end, staff and members are creating educational materials that explain the new rights established under the code of conduct, which all workers at the farms where the agreements are in place will receive. Meanwhile, the CIW plans to use an already existing third-party monitor, with the goal of creating an outside monitor to watch over the entire industry.
The industry obviously needs a watchdog.
Exempt from federal protections for overtime pay and collective bargaining, farm workers are among the poorest and least protected in the U.S.
In the extreme, these workers face situations of forced labor. In the past decade alone the CIW has aided the Department of Justice in the successful prosecution of six modern-day slavery cases involving more than 1,000 farmworkers. Twelve farm labor supervisors are currently serving sentences in federal prison as a result of these cases.
The picking piece rate for Florida tomatoes has remained stagnant since 1980. A worker today must pick and haul roughly two and a half tons of tomatoes to earn minimum wage for a typical 10-hour day. Given the seasonal and precarious nature of farm labor, workers experience significant periods of unemployment and underemployment, all of which contributes to sub-poverty annual earnings.
Immokalee, an unincorporated community on the edge of the Everglades, is at the heart of this grueling work regimen. As the central production and distribution hub of Florida's massive tomato industry, the region is responsible for nearly 90 percent of the fresh tomatoes grown in the U.S. between October and June. Tomatoes are one harvest among many, however: Each year, Florida-based growers employ tens of thousands of primarily Mexican, Guatemalan, and Haitian workers to plant and pick crops ranging from tomatoes and citrus to cucumbers and watermelons.
In the months ahead, as the CIW undertakes the intricate task of implementing the agreement, workers in Immokalee and their allies will press ahead in their campaign by targeting supermarkets such as Publix and Kroger and food service providers Sodexo and Aramark, using many of the same tactics--including educational tours and protest actions--honed during its earlier battles with the fast-food industry.
"Much work remains to be done before the harvesting season begins in a few weeks, but we're really excited about the challenge," says CIW staff member Gerardo Reyes. "We're finally starting to see the changes that we've been fighting for for so many years."
(Image: (1.) After two years of delay, farmworkers in Florida will finally start getting a penny more per pound for tomatoes they pick. A powerful lobby group had blocked efforts to pass on the raise to workers, but employers' unity is cracking. Photo: CIW. (2.) CIW members were joined September 25 by Secretary of Labor Hilda Solis to announce the accord. Photo: Alan Pogue.)
This article originally appeared in Labor Notes.

Florida tomato pickers challenge supermarkets to 'do the right thing'