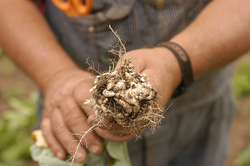 Decades of discriminatory lending practices by the U.S. Department of Agriculture made life difficult for African-American farmers throughout the South and Southeast. In 1999, black farmers won the largest civil-rights settlement in U.S. history in a class-action suit that brought to light the institutional and systematic racist and discriminatory policies practiced by the USDA over several decades.
But Black farmers weren't alone in facing USDA discrimination that denied them loans because of their race. In Texas and areas throughout the Southwest, Hispanic farmers also struggled against years of USDA indifference and discrimination in the department's farm credit loan programs, disaster relief loans and other aid and benefit programs. By denying minority farmers loans, disaster assistance and other aid frequently given to whites, in essence, the USDA's policies helped to drive minority farmers out of business, resulting in the loss of minority farms and land.
Following the 1999 victory for black farmers, in 2000 a group of 110 Hispanic farmers brought a lawsuit against the USDA for the same pattern of discrimination that resulted in the historic settlement with black farmers. The lawsuit has been an uphill battle waged by Hispanic farmers for more than a decade with little results.
Unlike black farmers, Hispanic farmers have not been granted a class-action designation, which means the plaintiffs must file individual lawsuits, a disappointing blow to many farmers. Lawyers and advocates for Hispanic farmers say that individual litigation not only would have little chance of success, it would also prevent Hispanic farmers from saving their family farms because they can't afford to wage such expensive individual lawsuits.
Last week the U.S. District Court for the District of Columbia reviewed the status of the lawsuit, Garcia v. Vilsack. Hispanic farmers and the USDA met before a judge to discuss the possibility of a financial settlement, but no agreement was made.
The Last Plantation
The USDA has acknowledged its long history of discrimination, a history that gave the department the name of "the last plantation." Earlier this year, Agriculture Secretary Tom Vilsack announced a commitment to eradicating USDA's policies of discrimination, which he described as "a conspiracy to force minority and socially disadvantaged farmers off their land."
It was the decades-long struggle by black farmers that brought initial media attention to the USDA's policies. In 1997, a group of black farmers, mainly from rural areas in the South, filed a lawsuit -- Pigford v. Glickman -- to seek redress for discriminatory lending practices by the USDA. In 1999, rather than risk a trial, the federal government settled with 15,000 black farmers for a history-making $1 billion.
In the years following the ruling, as Facing South reported in 2008, many black farmers said they were not adequately informed of the terms, causing them to miss the 2000 filing deadline. While the 2008 Farm Bill included a provision to assist these late filers, the bill, however, capped the total funds at $100 million, an amount not anywhere close to what would be needed to make payments. Earlier this year President Barack Obama pledged to give black farmers an additional $1.25 billion.
But little has been done for Hispanic, Native American and women farmers who also received less than their fair share of USDA money for crop payments, disaster payments and loans. Advocates for Hispanic farmers say that because the lawsuit, Garcia v. Vilsack, is virtually identical to the black farmers' suit, they are still hoping Hispanic farmers will get their chance to negotiate a class-action settlement with the federal government.
Lawyers for the plaintiffs say that potentially thousands of Hispanic farmers could be eligible to participate in a class-action case. This past September, Hispanic farmers filed a petition asking the U.S. Supreme Court to review the class-action ruling.
(Image by shaunaforce on Flickr.)